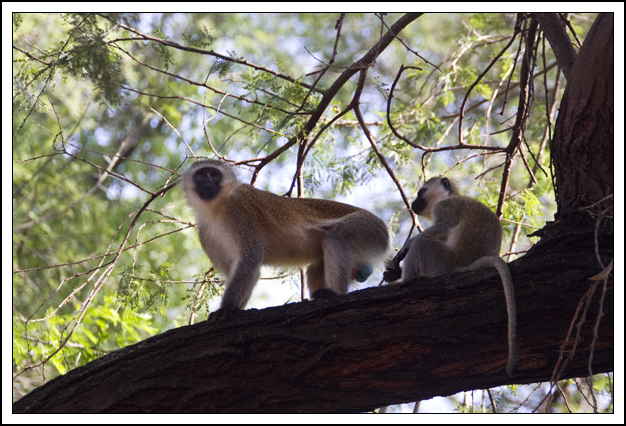 Vervet monkeys groom each other after the war. Photos by David Lansing.

War has broken out between the baboons and the monkeys at Elephant Watch Camp. Yesterday morning at breakfast I noticed dozens and dozens of baboons moving downriver along the south bank of the Ewaso Ngiro River, marching in single file, one after the other, the way an army troop might move if they were positioning themselves for battle.

The vervets, with their little round faces and long ratty tails, picking acacia pods in the trees overhead of our camp, seemed nervous and upset. They made little squeaking noises and danced from limb to limb looking anxiously across the river. 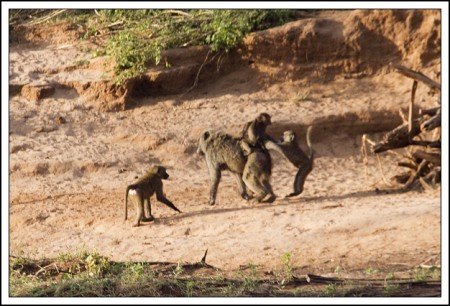 Baboons gathering along the river. Photo by David Lansing.

The baboons appear to be a nomadic troop, opportunists who, like the shiftas that trouble this area, look for a weakness in local defenses, steal what they can, and then move on. They are quite shifty and know how to act in concert, like con men; if you’re eating out in the bush, one baboon will slowly approach you and if you are foolish enough to get up to shoo him away, two or three other baboons will come out of nowhere to quickly steal whatever you’ve left behind.

Not that the monkeys are much better. They’re also quite accomplished thieves. Yesterday morning a Samburu came by my tent shortly after dawn with a tray with tea and fruit and rolls. I was still lazing in bed and told him to just leave it on the table outside my zipped up tent but he wouldn’t do it. Said the monkeys would steal it the minute he put it down. And even if I took the tray into my zipped up tent, they might have a go at it if I walked away to take a shower or go to the loo. “They will unzip your tent,” the Samburu told me. “They are very clever, these monkeys.”

Anyway, sometime during the night there was a battle royal between the nomadic troop of baboons and the resident vervets. The sounds of battle echoed across the camp throughout the night. It sounded horrific. When I woke up this morning I half expected to see the baboons, which are much larger than the vervets and have such awful canine teeth, triumphantly marching around the camp, but there were none to be seen. The vervets were sitting in the branches of the large sausage tree in front of the mess tent, grooming each other and munching on pods in the trees. Evidently they’d survived last night’s battle. But I have a feeling the war isn’t over.