The mysterious visit to the Tres Amigos

We’d been out diving near the island of Cayo Levisa, about a hundred miles west of Havana, looking for lobster. Fletch came across a juvenile or two but wasn’t able to pull them out of the rocks. So we were in the tender on our way back to Unplugged when we came across an old battered fishing boat, its hull rusty and peeling paint, called Tres Amigos.

It’s dicey to make contact with a Cuban boat at sea. The authorities at Marina Hemingway and Cayo Levisa had warned us not to let any boats approach us and to avoid making contact with fishermen. We couldn’t quite figure out if they were worried the fishermen would seize Unplugged and make us sail them to Miami or thought we might contaminate the Cubans with our tales of capitalism.

Anyway, we decided we’d slowly approach Tres Amigos and if they didn’t use a speargun to take a shot over our bow, ask them if they had any lobsters to sell us. 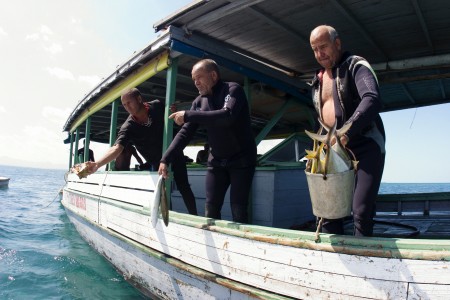 Cuban fishermen offer us their catch. Photos by David Lansing.

The fishermen leaned against the railing, watching with curiosity as our tender approached. They said they didn’t have any lobsters yet but they did have some fish, so we asked them if we could buy some from them. A few minutes later, one of the fishermen came back with a bucket full of yellow jacks. He started tossing them at us as if they were baseballs. I don’t know how many they gave us; maybe four or five, enough to easily feed everyone aboard Unplugged. Then, just for good measure, they tossed us a couple of large conch as well. 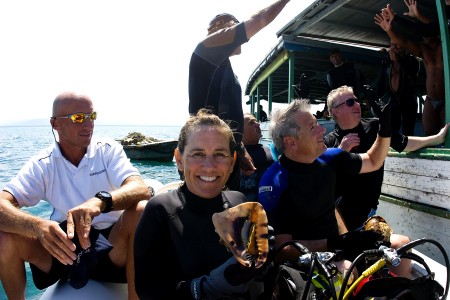 But the fishermen wouldn’t take our money. They kept waving away the pesos I offered.

Where else in the world can you pull up next to a working fishing boat and have the crew chuck you twenty pounds of fish and not want something in return?

So we went back to Unplugged all giddy and everything, anxious to give our booty to Donovan, the chef. But Marianne, a crew member who is generally in charge of organizing the meals, didn’t seem too thrilled by our bounty.

“I think Donovan already bought some fish today,” she said in her lovely Australian accent. Still, she took the fish and conch from us.

We were still feeling like we should have given the fishermen something, even if they didn’t want our money, so Hardy suggested that we get a couple of bottles of booze and some other treats—cigars, candy—and go back out to the Tres Amigos.

Which is what we did. But this time we got a completely different reception. There was only one guy on the boat. The others were all out diving or in small pangas. The guy on the boat seemed upset that we were back. He didn’t want us to approach Tres Amigos. We showed him the bottles of Scotch and rum, but he just shook his head and wagged his finger at us.

The fisherman said no and kept waving us off. Go talk to el jefe, he shouted, pointing to one of the pangas where an old man was standing in the boat yelling instructions to the other fishermen.

We motored over to the boss. The minute we pulled up alongside his panga, he reached down into his boat and pulled up the most enormous lobster I’d ever seen. He handed it to us. And two others. Still, he would not take the booze or anything else we’d brought.

So we’d come back out to Tres Amigos to thank the fishermen for the jacks they’d given us, but instead of taking our gifts, they’d given us lobsters. Which made us feel even worse about things.

Obviously there was some sort of Cuban regulation at play here and our presence was only making these fishermen nervous and upset. We’d seen a military boat in the area earlier in the morning and maybe they were afraid they were being watched. Or, even more likely, concerned that someone on Tres Amigos would report back to the authorities that they’d taken gifts from a bunch of gringos. Whatever the deal was, it wasn’t good. They didn’t like us being there. 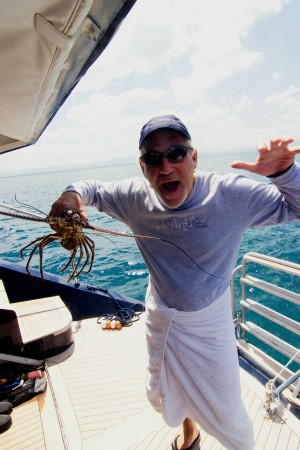 Hardy with a lobster before it was returned to sea.

Back at Unplugged, Marianne was even less thrilled to see our lobsters than she’d been with our fish. “We’ve got lots of lobsters,” she said. She took the biggest, noticed it was a female with eggs, and put it back in the water. The others soon followed. Evidently she’d already returned the conch. Which disappointed Kim because she was sure that one was just a shell, without the conch inside, and wanted to take it home with her as a souvenir. Oh well. Better, I’m sure, that it all went back into the sea.

I don’t know what happened to the jacks we’d brought back but I can tell you we didn’t have them for dinner that night. It seems everyone’s gifts–ours as well as the fishermen’s–were not appreciated today.