The old man of Cojimar

From the fort at Cojímar we walked over to a little plaza across the street where there is a bust of Hemingway which is a copy of the one at the El Floridita in Havana where, back in the 1930s, Hem supposedly helped the bartender, Constante Ribalaigua, perfect the daiquiri (I’m talking about the real thing, made with white rum, lemon juice, sugar, and a few drops of maraschino juice, not those godawful frozen things you get nowadays). 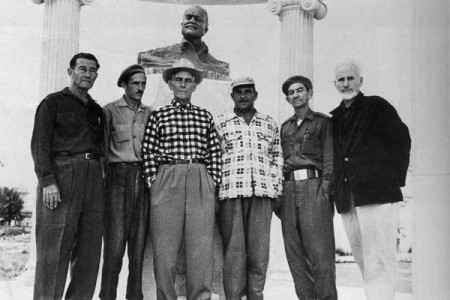 The fishermen of Cojimar in front of the bust of Hemingway. In the middle, with hands in his pockets, is Pilar's captain, Gregorio Fuentes.

Anyway, the story is that after Hemingway died, his fisherman friends decided they’d like to have this bust of the author made as a tribute. But times were tough and money was short. So they went around Cojímar and collected anchors, hooks, tools, propellers—anything that could be melted town and used for the bust. And here it is, with a lovely verdigris patina, facing the harbor.

Sitting on the steps in front of the Hemingway bust was another old man of the sea cradling a guitar on his lap. Now, Cam is quite the musician (more about that tomorrow) and can’t help but have a look at any instrument he comes across, so obviously he was curious to see what sort of a guitar the old man had. He sat down next to the old guy and they chatted a bit. Then Cam asked him to play something for us. The old guy didn’t need much encouragement. He immediately broke into a solo rendition of the Cuban classic “Chan Chan.”

Well, it wasn’t the best version I’ve ever heard. But you’ve got to give the old guy credit for giving it a try. You can see the whole thing on the video above. I think the most humorous thing is when the dog in the background starts barking. At first I thought he was just barking at us but it becomes clear, as you’ll see, that he was either accompanying the old man’s singing or, more likely, protesting. Anyway, it’s quite funny.