The tour of Kinloch Castle on Saturday was interesting in an Addams Family sort of way. Its owner, Sir George Bullough, obviously had some issues (After inheriting the castle from his father, who died from the effects of a London smog in 1891 at age 53, George built a vaulted and tiled mausoleum on the island for his father’s remains. Stung by criticism that the floral ceramics reminded visitors of a public lavatory, he built another—this time a Doric temple—and had the original dynamited. According to our guide, Sir George loved playing with dynamite). 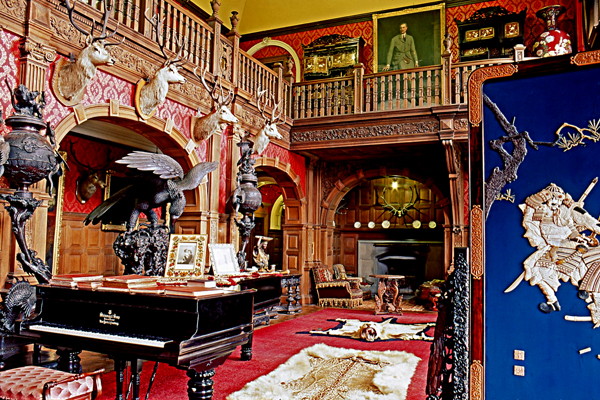 Try not to step on the animals at Kinloch Castle.

The first thing you notice when you come into the castle are all the dead animals. The guide implores us not to step on the lion. Or the leopard. Not some sort of faux lion or leopard, mind you, but the real thing. Smashed and flattened into rugs. Then there are the 20 or 30 deer heads staring placidly at you from the wood-paneled walls like an all-stag men’s choir getting ready to break out into something from the Bambi soundtrack.

There are also innumerable glass cases filled with dozens of dead, stuffed birds that Sir George personally shot. Yuck. Upstairs in the library are strange photo albums full of sepia shots of Sir George at beheadings in China or admiring torture devices in the Far East. And more than a few albums full of Victorian pornography (the guide would only allow me to take a “quick glance” at the albums). 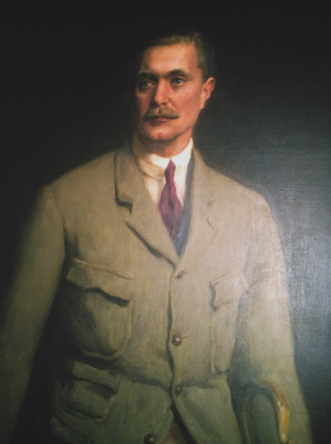 A portrait of Sir George Bullough.

Obviously Sir George was a bit kinky, which, perhaps, explains why he spent the equivalent of $27 million in today’s terms to build a castle far, far away from civilization.

I can just imagine him back in London saying to his wife, Lady Monica (a bit of a tart herself; she was reputedly the lover of many rich and famous men. Her first husband divorced her after he discovered she was having an affair with Sir George), “Darling, do you fancy spending the weekend at the castle trying out that stretching rack I brought back from Shanhai?”

“Oh, no, dear. You go ahead without me. But don’t spend too much time in the dungeon. You know how out of sorts it always makes you.”