The storyteller of Jura

On an island where myths abound and the wee people are still thought to be responsible for life’s mishaps and mislaid possessions, I’m not too surprised when our Jura guide, Mike Richardson, a sprightly septuagenarian, tells me as we walk through thick green fields to his croft house about a mile north of Orwell’s Barnhill, that the island is full of fairies.

“I’ve had plenty of dealings with them,” he tells me, and then recounts the time he lost a farm tool and found it, a year and a day later, lying on the very road we’re walking on, just as an islander had predicted.

And then there’s the Future Stone, a huge piece of guartzite on the way to Corryvreckan, that was probably placed in the field we’re crossing some 5,000 years ago. Look at it from a low point towards a cleft in the western hills, Richardson tells me, and it marks the winter solstice.

“But more importantly, they say it could reveal the future.”

Richardson says he doesn’t know about that, but when he was having back troubles recently, he rolled his back on the crystals and “I was as good as new.” 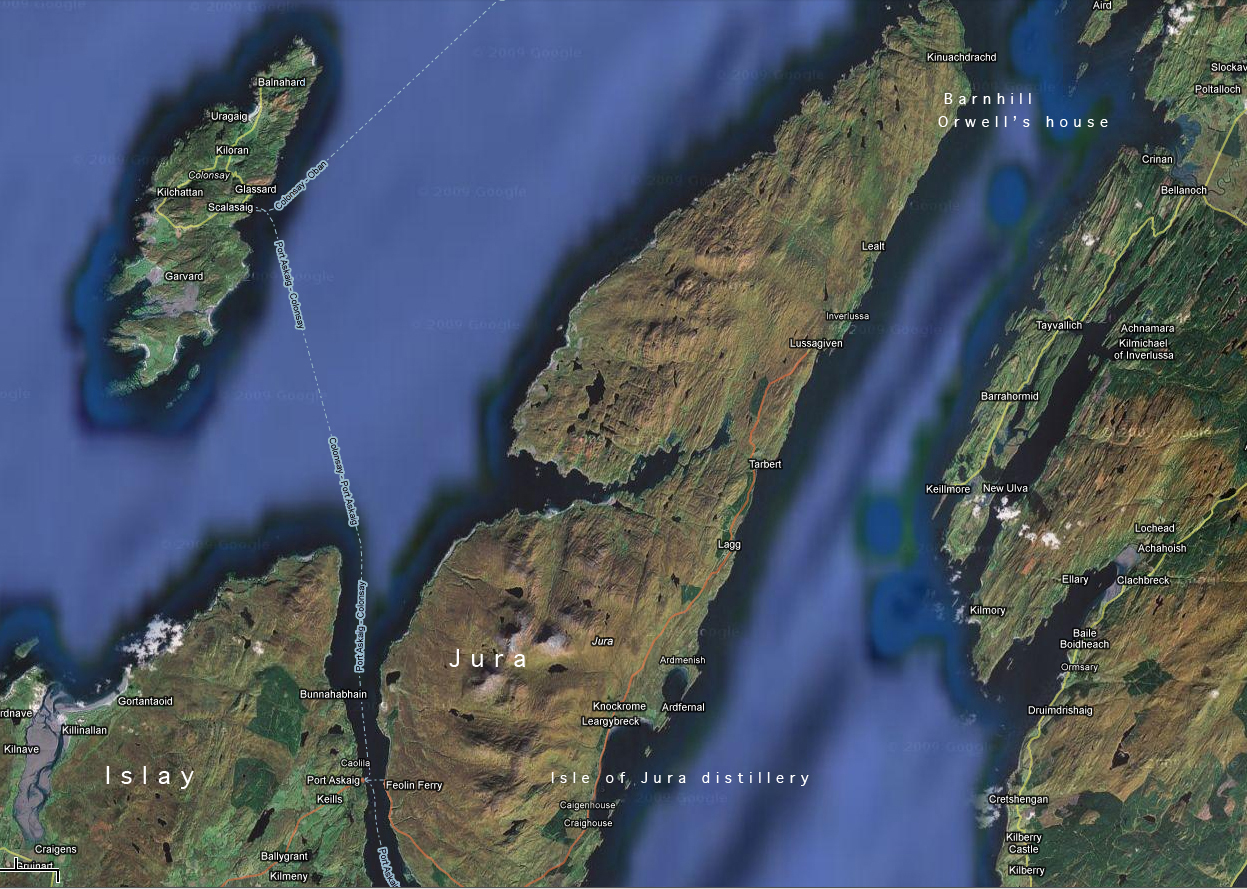 Eventually we make it to an old croft at Kinuachdrachd—truly the end of the road—where Richardson and his wife, Joan, have lived for over 30 years along with a menagerie that includes a herd of goats, two geese, a one-eyed collie, a 40-year-old donkey, and an old ship’s parrot, called Charlie, that’s at least 85 and was given to his mother, he tells me, “by a young sailor heading off to The Great War.”

Over a cup of tea, Richardson points out features of the 250-year-old house, including it’s three-foot-thick stone walls, and the clever way he’s rigged water to flow to the kitchen from an outside well and electricity from a generator.

“When we moved into the house, it hadn’t been lived in for 25 years,” he says. “It was a sad, old house and we had to redo everything.”

While offering us another cup of tea, he tells us stories of the island: of being a stuntman in a BBC movie about Orwell, of his days as a fisherman on the island, and of the great difficulty in raising his three children here. It’s not until Charles clears his throat and purposefully looks at his watch that I realize several hours have gone by and if we don’t hurry, we’ll miss the last ferry off the island. Though Jura is only 30 miles long top to bottom, it will take us a good two hours to get back to Feolin to catch the ferry.

As it turns out, there’s an afternoon wedding going on at the little stone church in Craighouse and we get stuck in the wedding traffic (at least four cars) on our way back. We’re the last ones on the boat.