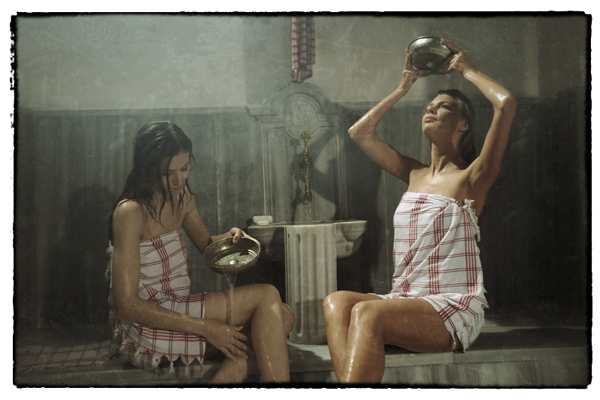 This is a photo from the Cemberlitas Hamami website. But I never saw any gorgeous women there. In fact, I didn't see any women there at all. Pity.

So back to the Turkish baths in Istanbul, Çemberlìtas Hamami: A rather unpleasant hairy attendant took me up the stairs to a little changing room, about the size of a large telephone booth, and handed me a key and a pestemal to wrap around my waist. Then he grunted and pointed downstairs and said something in Turkish that I assume meant something like “After you change, get your ass downstairs” (this guy reminded me of my very disagreeable apish high school football coach).

I go downstairs, holding tight to my cloth wrap, and open the wooden door into the hararet, or hot room, the main room of the Turkish bath. The place is, well, hot. Really hot. The first thing I noticed was this massive circular marble slab. Honestly, it looked like a place you’d sacrifice goats or lambs or something. I sat on the edge of it, trying not to fry my eggs, wondering what I was supposed to do. A few minutes later Sidar came in and told me that I should lie on my back on the marble slab.

So I lay on the slab and looked up at the dome with its star-like windows and tried to pretend I was enjoying this. According to Sidar, the point of lying on the hot slab was to get all sweaty. Well, I was certainly doing that.

After 15 or 20 minutes, when I thought I could no longer stand to be in this sweaty, steamy room, the old hairy attendant came in, also wearing a cloth towel around his middle, and motioned for me to turn over and lie on my stomach. At this point it became readily apparent that they were definitely trying to cook me.

I turned over and the guy started briskly soaping me up with a very coarse mitt. After he’d taken the skin off my back, he grunted that I was to turn over and then he began to tenderize my chest and legs. This went on for awhile. At this point I’d rather given up hope and felt rather like a young gazelle held firmly in the jaws of a lion. Easier to submit than to struggle.

“Is that it?” I asked Sidar, who’d just gone through the same thing.

“Almost,” he said. “We should stay here and relax a bit.”

“But what about the pummeling? What about getting the crap beat out of us? I was preparing myself for that.”

Sidar looked sheepish. “I asked them not to do that,” he said.

“I thought it would be too much.”

“For both of us.” Then he quietly asked me if he should go back out and ask my attendant to pummel me. “Mind you,” he said, “I’m not going to do it.”

I said no, that was fine.

“There is a very nice hamam in Bodrum,” he said, which is where we’re going next. “I will arrange to have you pummeled there.”

That’s great, I said. Pummeled in Bodrum. And so after awhile, we went back to our cubicles to dress, saving the pummeling at the Turkish baths for another day.