The Turkish origin of the meze 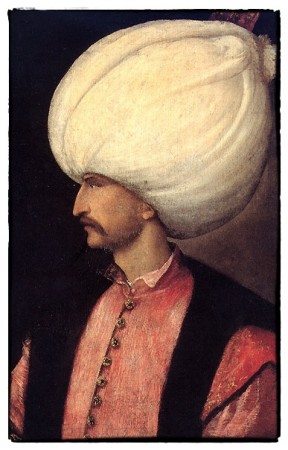 We have Suleyman the Magnificent's paranoia to thank for the invention of the meze.

Jim and Perihan Masters live on the Aegean Coast of Turkey about 50 miles south of Izmir where, as they say, they live “an idyllic life by the sea—writing, drawing and painting, and teaching English.” They also sponsor the Turkophile website Learning Practical Turkish. Ask these linguists about the origin of meze and here’s what they’ll tell you:

“Apparently, times were tough in ancient Persia, because a successful ruler had to employ personal food tasters if he wanted to stay alive past the midnight snack. When Sultan Süleyman the Magnificent’s Ottoman forces conquered the Persian Safavids in 1538, the Sultan took the idea of tasters home with him. Thereafter, Süleyman’s staff of çesnici (taste) slaves were given small plates of food samples, known by the Persian word, meze, meaning pleasant, enjoyable taste.

“As news of the Sultan’s safety practice reached public ears, it became the fashion of the rich and famous to exercise a variation of it. Before long, replicas of the revered meze plates of Süleyman’s chief food taster were seen at posh dinner parties throughout Istanbul. The meze craze caught on in upper-class haunts as gedikli meyhaneler (all night bars) and, not to be outdone, the working men’s clubs also adopted the idea. And so it was that meze passed into Turkish culinary culture, dutifully accompanied by glasses of Turkish raki.”