The umbrella girl has a message 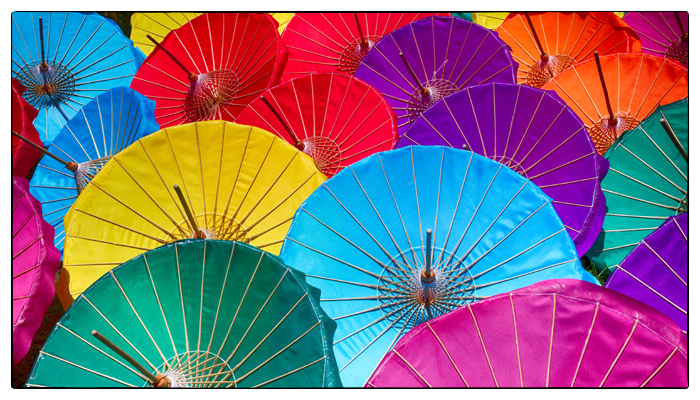 Just-dyed umbrellas drying in the sun at the Bo Sang umbrella village. Photos by David Lansing.

I’m starting to be suspicious of Ketsara’s motives. She never suggests we go look at a temple or feed the monks just for the hell of it. There’s always some deeper reason. And most of those reasons seem to have something to do with my edification. So I was pleasantly surprised when yesterday afternoon she suggested we go to the umbrella factory in nearby Bo Sang. What could be more benign than an umbrella factory?

What do you think of when someone says “umbrella factory?” Probably not much, right? I mean, is there a clear image in your head of what, exactly, an umbrella factory would look like? There wasn’t in mine. I thought, well, it’s probably some sort of warehouse-like building where one person connects the ribs to a pole and another person screws on the handle and someone else attaches the shade. Or something like that. 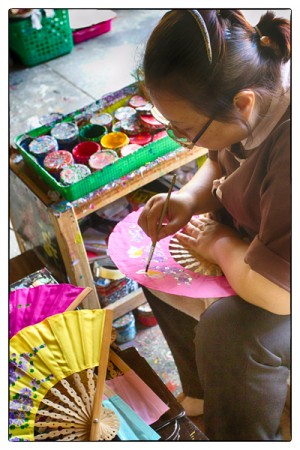 An artist painting scenes on a silk fan. Photo by David Lansing.

That’s not what this was at all. This was a place where everything about the umbrella is handmade, from the wood spokes to the color on the paper or silk umbrellas. Imagine a horseshoe-shaped pavilion with a grassy central area in the middle and dozens of workers—mostly women—sitting casually on the floor doing whatever it is each one of them is supposed to do.  Some of the women do nothing but use a small hatchet to split strips of wood from a two-foot round limb. Some other women do nothing but shave those strips in to squares. And another group of women sands the strips. I mean, talk about labor intensive! And this is the way they’ve making making umbrellas in this village for two-hundred years.

The most interesting part of the process to me, however, were the artists who hand-painted the umbrellas. Some of the scenes were really elaborate—like a forest with tigers—and some of it was just symbols or lettering, but it was all beautifully done. As I was watching this, Ketsara went over to an artist who was decorating a hand fan, which they also make here, and talked to her. The artist nodded and picked up a just-made deep blue silk hand fan and painted something on it in gold Thai lettering. When she was done, she handed it to Ketsara with a bow. She brought the fan over and handed it to me. I took a look at it and handed it back.

“No, this one for you,” she said. Astonished, I asked her what the lettering said. “That not important,” she said. “Maybe find out later.”

So here we are again. Even at the umbrella factory Ketsara can’t help but send me a message. Even if I don’t know what it is. And maybe that is the message. 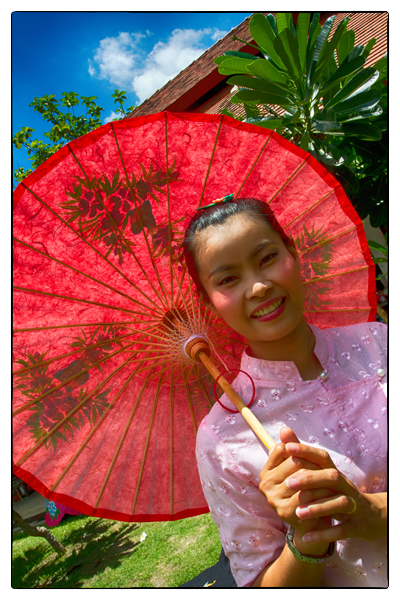 Umbrella girl has a message for me. But I’m not sure what it is. Photo by David Lansing.