To eat or not to eat the dorado 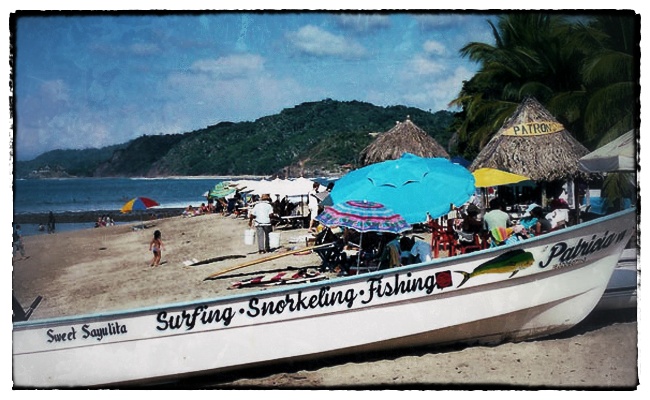 A panga in Sayulita with a dorado painted on the front. The fish used to be prolific in these waters.

The other day I was talking with Dennis, who owns Gecko, the rental car company here in Bucerias. Dennis does all the work on the Blue Whale and I wanted to see when I could bring her in for some scheduled maintenance work. Dennis is also a big fisherman so I asked him how the fishing was in the Bay of Banderas. He said it was good—lots of tuna and marlin.

“How’s the dorado catch?” I asked him.

He shook his head. “Not good,” he said. “It’s all fished out. Too many long-line boats.”

I found that shocking to hear. The dorado catch a few miles off the coast has always been phenomenal. And now, according to Dennis, there just wasn’t much out there anymore. Which explained why, the day before, when I’d gone to Mega, hoping to pick up some fresh fish to grill for dinner, and had specifically looked for dorado, they didn’t have any. Which really surprised me at the time. Now I knew why.

I bring this up because last Sunday, when Jeff and I spent the day in Sayulita, we saw one of the fishing pangas coming back from an excursion with several tourists, all of whom got out of the boat holding dorado. They weren’t particularly large dorado, but dorado none the less. So evidently they’re not completely fished out. Still, it made me wonder if the tourists knew that they had caught fish that are becoming increasingly rare along this part of the Mexican coast. Probably they had no idea.

Late that afternoon, as we were preparing to leave, we wandered down to the little fish market close to the bridge. A couple of fishermen were cleaning some shrimp they had brought in that day. Just out of curiosity, I asked them if they had any dorado. One of them nodded and went behind a curtain, coming back with an ice cooler. He opened it up and showed me several filets of fresh dorado.

Now here was my dilemma: I knew that dorado were being over-fished. But I was really lusting after one of those fillets. So part of me was going, Don’t buy it; the fishery here isn’t sustainable. The other part of me was going, They already caught the dorado; if you don’t eat it, someone else will.

In the end, we bought it. And it was even better than I’d hoped. But I can’t honestly say that I really enjoyed it.