To the Che museum 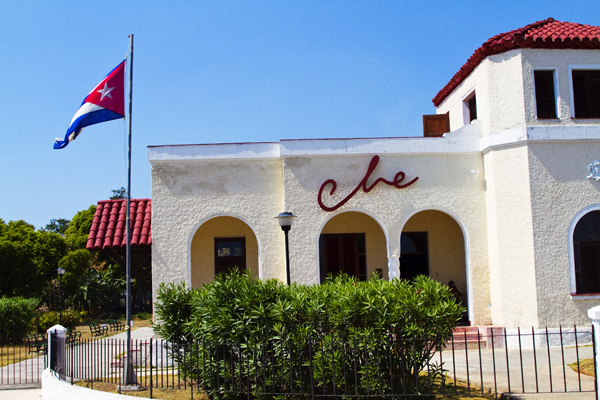 We hadn’t ordered lunch yet at La Terraza because we were still waiting for Greg. We were enjoying the Cuban music and the cold Cristal beers and the sea breeze coming in from the bay and there was no hurry about anything. But then our driver, who had been sitting in the Impala beneath the shade of a thin tree by the plaza, came into the restaurant and respectfully told us that he could not stay any longer. He reminded us that he had told us when we rented the car that he had to be back in Havana by three and since it was now after two-thirty, he had to go. He was sorry. It was not something he liked to do, but there it was.

So we paid him the money we owed him, giving him a generous tip to let him know there were no hard feelings on our part, and went back to our lunch. At this point we weren’t sure if Greg was going to join us or not so we went ahead and ordered, getting a couple of dishes we could pass around, like the seafood paella and an octopus dish, plus some shrimp. Just as our food was being served, Greg came in. He pointed at one of the dishes, not bothering with the menu, and asked the waiter for the same thing. It was a very pleasant afternoon.

As we were paying our bill, we asked the waiter to call a taxi for us. He said it would be a few minutes. When it came, it was a small car, not nearly big enough for all six of us. Hardy asked the waiter to get us another taxi but he said this one was the only one available. So we decided that I would go with Cam and Nick and then the taxi driver would come back to the restaurant to pick up the rest of the group. We were headed for Casa Blanca, the little village on the other side of the Bay of Havana known for its 60-foot-tall marble statue of Christ and for the Che museum. The taxi driver dropped us off near the Christ statue and we walked down the hill to the Che museum.

There is very little to say about the Che museum because there is very little in the Che museum. Almost everything in it, from his bedroom scene to his office, is reproductions of furniture and material from old photos. He was a dentist so one display case has “dentist tools of the period.” Not Che’s tools, mind you, but just some nasty looking pliers and probes from the 50s. We went through the whole house in about ten minutes and then we sat on the tiled roof of the museum, looking out over the harbor and across the water to Havana Viejo, waiting for the others to arrive. They too went through the museum quickly and then we took a few photos in front of the Christ statue before walking down the hill towards Casa Blanca. There were some kids playing soccer in a playground next to a church. When they saw us walking by, several of the younger kids ran over, their hands out, asking us for candy or gum. We didn’t have anything to give them. They followed us for a little while, like stray dogs, before turning around and running back up the hill.

At the bottom of the hill was a small ferry building. The guards checked our bags and let us pass through. We sat in the humid dark hallway with about half a dozen other travelers, all locals, waiting for the ferry to come back from Havana. It was so hot and humid in the ferry building that all I could think about was getting back to the hotel and taking a swim in the rooftop pool. We had talked of maybe walking back to the hotel through old Havana but that was before going to Cojimar and the Che museum and walking down the hill to Casa Blanca. Now everyone was tired and hot and just wanted to go back to the hotel. It had been a very long afternoon.