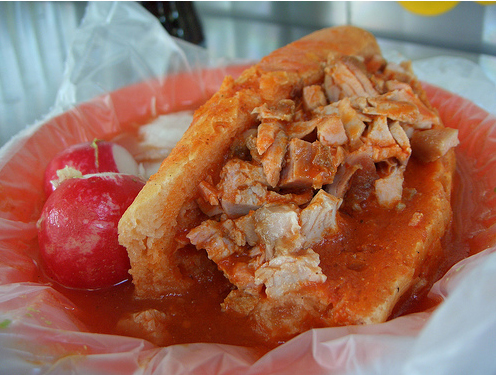 It’s not easy driving around downtown Puerto Vallarta. The roads are cobblestone and there are no lanes. It’s just a rush of traffic dashing in and out of openings in the traffic, sort of like an urban version of the Indi 500. Add to this cars that just stop in the middle of the road so the driver can run in and pick up a roasted chicken or the never ending parade of local buses that block lanes anytime someone wants to get off in front of this store or that one, the lack of stop signs and traffic signals, the kids playing in the street—well, it can be a little stressful to navigate.

So here I am, both hands firmly on the wheel, playing Mexican chicken with other drivers as I dart through an intersection with no stop signs, deftly avoiding two or three feral dogs who came out of nowhere and the guys on the three-wheeled bicycle cart selling bags of agua de coco, and Carlos, who is sitting next to me taking it all in, says, “Hey, I could really go for a torta ahogada right about now and this is exactly the sort of neighborhood where you’d find one.”

“Carlos,” I tell him, “even if you spotted one, I wouldn’t be able to stop quickly enough and even if I could stop, there’d be no place to park. There’s no way.”

“Yeah, I know,” says Carlos. “But they are so good and they remind me of my grandfather.”

This was a low blow since I knew that Carlos’ grandfather, who lived in Guadalajara where Carlos’ family is from, had recently died.

Okay, fine, I told Carlos. You look for a torta ahogada stand but you’d better give me plenty of notice if you spot it because I’m not going to just stop in the middle of the street like the rest of these drivers.

Frankly, I’d never had a torta ahogada, which is a Guadalajara specialty, but Carlos had been talking about them so much for the last few days that I felt like I’d grown up with them. According to Carlos, they are a favored Mexican sandwich made with a very hard roll, called a birote salado, which has a thick, crunchy crust but a soft, doughy interior. The roll is sliced in half and piled with fried pork and maybe some raw onions and chile peppers, and then drowned in a very spicy sauce made of arbol chiles, garlic, tomatoes and, most importantly, vinegar. Ahogada means “drowned” so when I say this sandwich is really dunked in this sauce, I’m not exaggerating. Ideally the entire torta should be submerged in the sauce.

So anyway, we’re driving through Puerto Vallarta but Carlos is having no success finding a torta ahogada place. And then just past the airport, in a little strip of malls surrounding a round-about, he spots this little fast-food place advertising torta ahogadas. The only trouble is that I’m on the inside lane of three lanes of traffic and the entrance to the restaurant is ten feet in front of us. Nevertheless, I cut across the traffic, getting lots of pissed off looks and honking horns for my effort, and we make it. Carlos goes in and comes back a few minutes later holding a plastic bag that looks like something they’d give you at the pet store if you went in to to buy a dozen goldfish, except the liquid is a bright red and on the bottom, looking like a sunken toy submarine, is the torta ahogada.

There’s no way we’re eating this in my car. So we stand in the parking lot, trying to figure out a way to gracefully dip a hand into the bag of fiery sauce and take a bite of the torta without having most of it dribble down your shirt, but there is no graceful way to eat ahogada so we just go for it, like a couple of stoners using our hands to rip into a chocolate cake. I thought it was pretty damn fine but Carlos says he’s had much better in Guadalajara. Of course. So now I’m thinking we may have to go on a road trip. To Guadalajara in search of the perfect torta ahogada.