Turtles and a sunset in Custodio 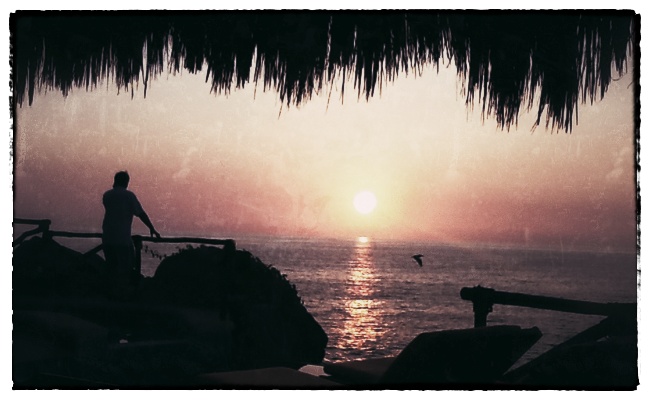 The sun sets over Custodio in Mexico. Photo by David Lansing.

Jeff and I planned to drive up to Custodio mid-day to visit the Fletchers but by the time we actually got out of Bucerias the day was almost gone. We took the stone steps down to the water’s edge and crossed the estuary in waist-high water to Playa Tortugas. At the turtle preserve, they were preparing to release a thousand or so baby turtles. We watched as one of the workers dug deep holes in the sand looking for any turtle eggs that hadn’t hatched yet. The man in charge said they would release the turtles about half an hour before sunset and we could help, if we wanted, but we would have to pay. The amount of money he wanted wasn’t a lot, but the request irritated Chris. He has happily donated hundreds of dollars to the turtle facility and I think he was annoyed that now he was being asked to chip in more just to watch them release the turtles tonight.

The three of us—Chris, Malin, and I—have done the turtle release several times and none of us were really interested in waiting around for another half hour to watch it again, so instead, we walked further down the beach, passing by several dead fish washed up just beyond the tide line that were being slowly picked at by vultures. The vultures didn’t seem particularly hungry. One or two would rip a gash in the stomachs of the fish and pull out the guts to eat but there was no feeding frenzy going on. It was all very civilized, considering they were vultures.

By the time we got back to the estuary, the sun was very low in the sky. The tide was a little higher and it was more difficult crossing over. If the water got above your waist, it would pull you out towards the ocean or inwards towards the estuary, depending on which current you were in. Blue crabs, the size of abalone shells, skittered about at our feet. Every once in awhile you’d nick one and you could feel their pincers lashing out.

When we got back to Casa del Mar, there was just barely enough time to shower off the salt water and make a pitcher of margaritas. We sat out under the palapa, all of us rather quiet, watching the sun as it dropped like an orange balloon into the ocean. The day was done.