I needed to get some visa documents translated into official Spanish and so went to the Oficina Dobarganes on Correo yesterday afternoon where, for a modest fee, someone would translate a letter I needed to write to Migración telling them why I was requesting an FM3 card which would allow me to be in Mexico for longer than six months at a time.

It is not a simple thing to get an FM3. They need to know if your forehead is narrow, regular, or wide; your eyebrows scarce, bushy, or plucked; your chin oval, round, or square. They need to know how many languages you speak and what religion you are. Of course, in Mexico it is wise to just put Catholic.

Anyway, I went to get my letter translated and that’s where I ran into Albert, an elderly American with, I should say, a narrow forehead, bushy eyebrows, and a square chin. Albert was wearing an orange bolo tie over a worn yellow shirt and a rather threadbare black blazer. In a bit of a whisper, he suggested that were we to retire to a bench in the Jardín, he would be happy to write out my translation for a small “donation.”

A donation to who, I asked. 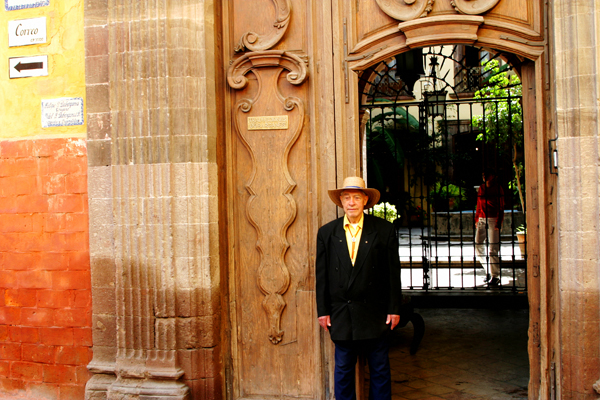 Albert waiting outside the translating offices of the Instituto. Photo by David Lansing.

Now I probably could have had someone at the Traducciones Dobarganes translate my letter for 150 pesos so it wasn’t like I was going to save anything by letting Albert do it (and who knew if he would even translate it correctly?), but I have to admit I was intrigued. I’d seen Albert around town. He seemed to move around a lot. Not necessarily doing anything but just wandering around at the Mercado or slowly walking up Santo Domingo to god knows where or wandering around in the Jardín. In fact, I imagine I’ve seen Albert every day since I’ve been here. Never sitting down anywhere. Always standing, as he was in front of the big wooden door of the translating offices, or just aimlessly wandering.

We sat down on one of the green wrought-iron benches in the park, Albert leaning forward as if ready to jump up at any moment and flee, and, before he could get to my translation, I asked him a few questions about himself. He rather nervously told me that he was originally from Michigan, although he hadn’t lived there in a long time.

Do you still have family there, I asked him.

Yes, grown children he told me, though it had been awhile since he’d heard from them. “They don’t know I’m here,” he said, his bushy eyebrows twitching. “It isn’t possible for them to know I’m here. That wouldn’t be good.” And then he looked at me with real fright in his eyes, as if I might be the one to betray his whereabouts to whoever or whatever it was he was running from.

Anyway, he wrote out my translation in very elegant handwriting and I made my donation. Then he seemed to relax just a little bit. I asked him how long he’d lived in San Miguel and he said a long time, and then told me two quick stories about life in San Miguel.

What with Halloween and the Katrina parade, there would be a lot of fireworks over the weekend, Albert said. Which meant that, undoubtedly, there would be fires. Did I know, he asked, that there were no fire hydrants in San Miguel and only a marginal volunteer fire brigade? I did not, I told him. “What do they do when a big fire breaks out?” I asked him.

“Mostly,” he said solemnly, “we remember it.”

Then he told me a story about a bruja who lived in the sierra outside of town. A bruja is a witch and San Miguel has a long tradition of brujas. In fact, tomorrow night, which is Halloween, has long been known as noche de brujas in San Miguel.

Anyway, Albert said that an old drunk bruja used to come down from the sierra in the morning and confuse the post office with a cantina that was right next door. Staggering into the oficina de correos, she would pound the marble counter and demand her tequila. The courteous post office employees always politely accepted her order and then ignored her. After awhile, she would leave, but not before putting a curse on Mexico as she left.

“But I haven’t seen her around for awhile,” Albert said. Then he quickly stood up and looked me very seriously in the eyes. “You’re moving into your dark days,” he said to me in a whisper. “I can tell. Dark days.”

And then he was gone, leaving me to wonder if he was foretelling my future or putting his own curse on me.