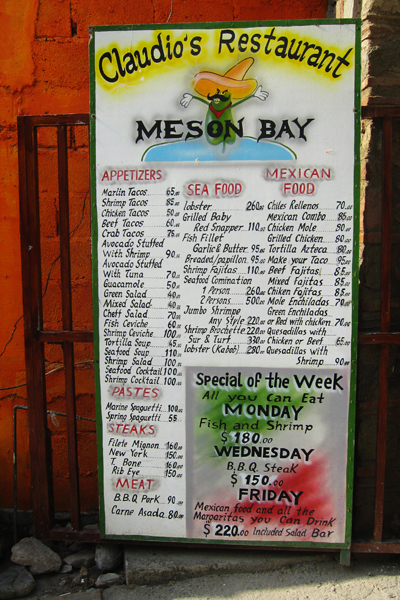 The menu board at Claudio's. Photo by David Lansing.

I was reading Patti Smith’s memoir Just Kids where she talks about how a big treat for her and Robert Maplethorpe was to go to one of those luncheonettes they used to have in NYC where you’d put in 25 cents into a machine and get a cheese sandwich and maybe 10 cents for a carton of chocolate milk. She writes about this one time where she was really hankering for a cheese sandwich and she put in her quarter or whatever it was only to realize that they’d gone up a dime. And she didn’t have any more money. So this guy gives her a dime and maybe even buys her a cup of coffee as well, I can’t remember exactly how the story went, and she sits down with him to eat and it’s the poet Allen Ginsberg. But the funny thing is that Ginsberg thought he was picking up a cute, skinny boy. This young Patti Smith is so androgynous looking that he doesn’t realize that he’s a she.

Anyway, I was just thinking of that story because I thought it was so interesting how Patti Smith and Robert Maplethorpe used to like to go to these luncheonettes. I mean, they knew the food was pretty horrible but, hey, it was cheap, and there was something very appealing and democratic about the crowd that ate there. Poor people down to their last two bits like them and businessmen in suits just wanting a quick easy meal and families who thought going there was a real treat.

That’s the way Claudio’s is in Bucerias. Particularly on a Wednesday night. Claudio’s is this simple little place on the beach with a mixture of rustic furniture and a palapa roof and waiters who can take 10 minutes to get you a beer. On Wednesdays it’s particularly jammed because that’s all-you-can-eat bbq night. They fire up the grill right there in the restaurant and cook up ribs and chicken and chorizo but the big attraction are the rib-eye steaks. For the equivalent of about $12.50, you can eat all the ribs and steak you want along with baked potato, pinto beans, salad, bread.

The thing is, the food is really not very good. It’s not bad; it’s just not good. The rib-eyes are as tough and gristley as bear meat, the ribs are dry and flavorless, and the salad bar is just iceberg lettuce floating in a pan of water. There’s usually a couple of guys playing Jimmy Buffet-like music way too loud so it’s impossible to talk unless they take a break and there’s another guy who goes around with a camera and a sombrero trying to goad people into having their picture taken wearing the ridiculous hat so he can sell them a hasty print before they’ve finished their dessert.

The waiters work very hard but there are so few of them compared to the number of diners that it can take forever to get your drinks and when you do, they’re almost invariably wrong. I usually order a Negra Modelo; they always bring me a Pacifico. If I ask for a small margarita, they bring me a large one; order one on the rocks and it comes blended. This is just the way it is.

Still, everyone I know goes to Claudio’s. It’s like those old luncheonettes in New York; for some reason it’s appealing. This afternoon Vicky called me up and asked if I wanted to join her and a few friends for dinner tonight. Sure, I said. Where are you thinking of going?

“Claudio’s!” she said. “It’s Wednesday—all you can eat barbecue!”