We’re not going to talk about it 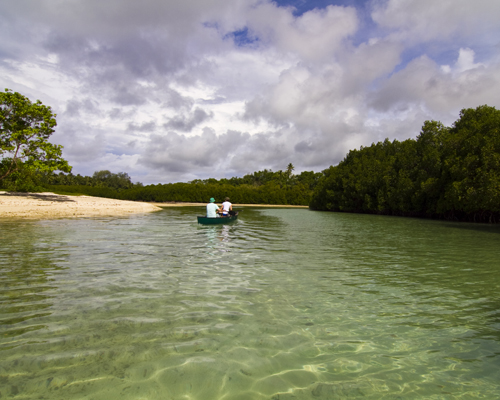 Where was I? Oh yes, upside down in a drifting canoe searching for my submerged camera bag. Well, I found it. Weighing twenty pounds, it hadn’t drifted far along the muddy bottom.

“This is not good,” I said to G who’d lost her hat and her new sunglasses. The straw hat she was able to scoop up before the current had taken it too far. The glasses were lost. I held my pack up high in the air as water gushed out of it like a broken pipe as I plunged towards the shore like a plow horse through viscous mud that swallowed me mid-calf. At this point the other canoes had caught up to us and were idling in the stream, watching us as we scrambled to secure paddles, canoe, clothes, towels, and my camera bag. Nobody said anything except, “What happened?”

What happened? I’ll tell you what happened. The New York mouse capsized our canoe. All right, it probably wasn’t strictly her fault since I was the one who’d instructed her to watch out for the mangrove branch, which she’d successfully accomplished by rolling our little unstable vessel into the drink. Still.

Well, it took awhile but we were able to get everything to shore, roll the canoe to get the water out of it, and recover everything but G’s polarized sunglasses which really had looked quite stylish on her.

“Are you going to look at your camera?” G asked me.

“G, my camera bag was on the bottom of the river. When I picked it up, water ran out of it for five minutes. Of course it’s not okay.”

“So you’re not going to look?”

“We’re not going to talk about the camera bag anymore. The next person who even says the words camera bag is going to be thrown out of the boat by me.”

“What did I just say? We are not talking about it anymore.”

We got back in the canoe. The tropical rain, which had seemed so charming only a few hours earlier, now seemed to be biblically punishing me. What, overturning the boat hadn’t done enough damage? Now god was going to hit us with an afternoon monsoon? I didn’t care. What more damage could be done? I draped a wet towel over the backpack and paddled as hard as I could. G did the same. Neither of us spoke. For the full thirty minute trip.

When we got back to Ratua, Frederick was standing on the dock, in the rain, waiting to greet us. G took him aside and told him what had happened. Frederick ran off and came back with dry towels and two hairdryers.

“Can I help you with your equipment?” he asked. Frederick is such the gentleman.

“No, thank you,” I told him. “I think what I’ll do is go back to my villa and sit on my veranda and open up my camera bag. If you hear a long scream in the jungle, it means I might be late for dinner.”

Before heading back to Crocodile Villa, I went to the bar and asked Claudia to make me an Espiritu Diablo. “Don’t be stingy with the tequila,” I told her. She made me a very large drink with very little ginger ale. Then I walked back in the rain, which had diminished, to my room, took a warm shower, changed into some dry clothes, and then pulled up a wicker chair in front of a small table on the veranda and opened up my camera bag. 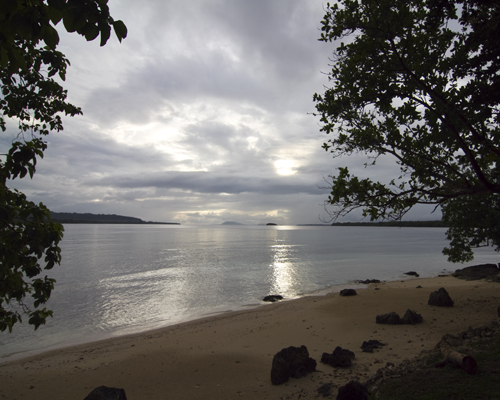 The view from my villa after the storm. Photo by David Lansing.

Not too surprisingly, everything was wet. Very wet. So I took all of the equipment out, piece by piece, removed batteries and lenses and memory cards, carefully dried them with the towels Frederick had given me, and then used a hairdryer to dry everything with hot air. The whole process took me about two hours. Then I spread all the gear out, unassembled, on the rustic desk in my room. I made myself a gin and tonic and sat on my bed. The rain stopped. The sun went down. After awhile, there was a knock on my door. I opened it just a crack. It was Frederick. “Is everything all right?” he asked quietly.

“Oh, sure. It’s fine,” I said, not having the heart to tell him the truth.

“The others are worried about you. Will you come join us for dinner?”

“Soon,” I said, and then I closed the door and sat back on the bed with my drink.

Tomorrow I will put everything back together. I will twist on a lens and slip in the lithium ion battery and install the memory card. And then I will move the switch to ON and see what happens. But not tonight. I’m just not ready to do that tonight.

Instead, I walked in the darkness towards the Yacht Club where I could hear voices and music in the sticky hot air, stopping at the bar to ask Claudia to make me another Diablo, and then I stepped into the candle-lit light of the dining pavilion and sat down next to G who, when she saw me, looked as if she were holding her breath under water.

I patted her hand. “We’re not going to talk about it.”

“But Frederick said everything was okay.”

I smiled at her. “We’re not going to talk about it,” I repeated. And for the rest of the night, we didn’t.