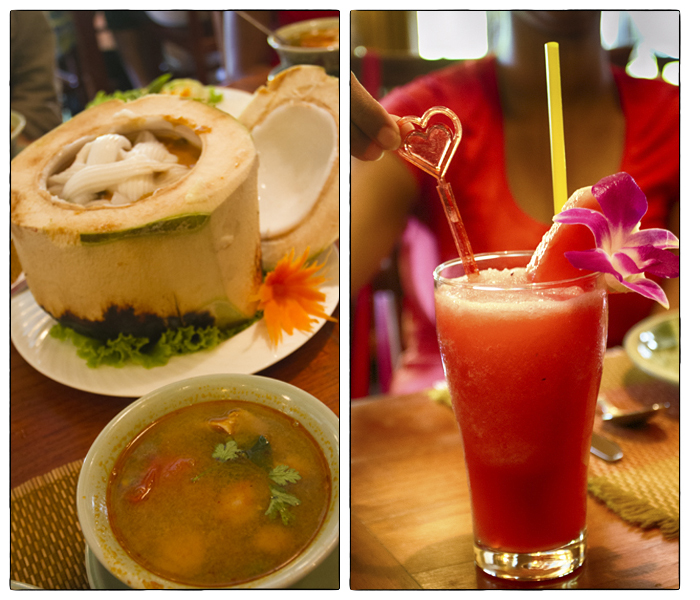 Hot and cool: Spicy shrimp in a whole coconut and a refreshing watermelon smoothie at Whole Earth in Chiang Mai. Photos by David Lansing.

Ketsara has me thoroughly confused. After getting me up before dawn to go feed the Buddhist monks and then dragging me up 304 steps to Wat Doi Suthep to work on my Buddhist parami (perfection), she takes me to lunch at a place that was originally set up as a transcendental meditation compound by Maharishi Mahesh Yogi in 1970.

Remember Maharishi Yogi? He was the Beatle’s guru, the one who really got George Harrison into the whole Indian thing. He didn’t exactly invent transcendental meditation but he’s probably the guy that made the whole movement explode back in the 70s. And as part of that, he set up a transcendental meditation retreat in Chiang Mai and opened up the city’s first vegetarian restaurant, Whole Earth.

The yogi died in 2008 and Whole Earth is no longer strictly vegetarian (though they certainly lean that way). But here’s the big surprise: This may have been the best meal I’ve had in Thailand. From the classical Tom Yum soup to the sautéed eggplant with ginger to the sweet and sour prawns served in a whole coconut, everything was outstanding.

Still, I had to wonder why Ketsara took me here. So I asked her.

“You have too much stress in body,” she said. “This place first nurture body then nurture heart.”

And then, as I panted after accidentally eating a whole Thai pepper, she ordered me a cooling watermelon smoothie. With intertwined hearts for a swizzle stick.