Nobody has ever accused me of being a dog lover, but I like Wendy’s dog, Wal-E, well enough. Perhaps because he’s always on a leash. Even when he’s just barking at the low-flying pelicans that taunt him while hanging out with me by the Fletcher’s pool. That’s because Wal-E doesn’t like Mexicans. Even though he’s a Mexican dog. Like Lou Dobbs, he indiscriminately attacks brown people (Is it possible that Lou Dobbs is actually Mexican?). Crazy, I know. 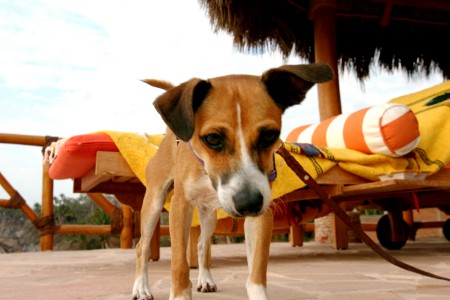 photo of Wal-E by David Lansing

Chris’ cousin, Wendy, found Wal-E in the Wal-Mart parking lot in Puerto Vallarta. Which is how he got his name.

Nobody knows Wal-E’s family history but it’s not hard to imagine. He was dirty, skinny, and starving to death when Wendy spotted him. A street dog. With a chip on his scrawny shoulder. No doubt long abused by whoever came across him. In the Wal-Mart parking lot, Wendy watched one Mexican after another offer Wal-E some leftover nachos or maybe a scrap from one of those chorizo pizzas they sell at the Sam’s Club next door, but despite Wal-E’s obviously dire circumstances, he wouldn’t take their food. Or get anywhere near them without growling.

But when Wendy approached him with some chili and lime-flavored peanuts, he voraciously gobbled them straight from her hand. It just about broke her heart, she said. Now, maybe he just happens to be a dog who prefers spicy peanut snacks to gloppy nachos (who doesn’t?), but I doubt it.

Having decided then and there to adopt Wal-E, she tried to take him with her into Wal-Mart but was turned away. No dogs in the store. So she tied him up to her Jeep and gave 10 pesos to one of those kids who loads your groceries into the car to get him some water and keep an eye on him. When she came back, both the kid and Wal-E were gone. She was heartbroken.

So Wendy drove around the barrio behind Wal-Mart looking for Wal-E. And there he was, hanging around in front of one of those rotisserie chicken joints, the sort of sidewalk Mexican enterprise where you can get a whole roasted chicken, rice and beans, guacamole, salsa, and a dozen corn tortillas for about seven bucks. I love those places.

Anyway, that’s where she found Wal-E. Except he was on the other side of the highway. Which was a problem. Because in this part of Mexico, you can’t make a left turn from the left lane of the highway. What you have to do if you want to turn left is turn right instead onto a lateral road and then go way past where you wanted to turn until you come to a signal and then you cut across the lane you were in five minutes ago to make your turn. It seems crazy at first, I know, but after awhile you get used to it. Just the way some people get used to calling French fries chips and eating them with mayonnaise.

By the time Wendy had made a right hand turn onto the lateral road, gone a quarter mile or so to the next stop light, waited for the turn signal, crossed the highway, exited onto another lateral road, and found the rotisserie chicken place, Wal-E had disappeared again.

Fortunately, within minutes she spotted him. This time he was in the middle of the highway, trapped between four lanes of rickety buses, speeding pick-ups, and over-loaded trucks. Wal-E was doomed. So Wendy did the only thing she could do; she stopped her car in the middle of the road. Which is like coming to a halt in the middle of a Los Angeles freeway (if the freeway was full of potholes, dead animals, and auto parts that have flown off countless vehicles).

She got out and, somehow avoiding death, grabbed Wal-E. He then rode the entire way to Punta El Custodio sitting on Wendy’s lap with his snout tucked in her crotch (you know boys). In gratitude, the minute they got home, Wal-E jumped out of the car and bit two  construction workers mixing cement at Bodega Boys’ parents house across the street. For good measure, he then attacked Ismael, who manages the development. And is the kindest, nicest soul I know. Ismael refuses to spray the compound’s landscaping for mosquitos in the rainy season because it would, you know, kill them. But he threatened to shoot Wal-E. Right then and there. Despite the fact that I’m pretty sure Ismael doesn’t own a gun.

The thing is, dogs aren’t allowed in this Mexican development. Particularly not dogs that go around biting Mexicans for no reason. So Wendy told Ismael that Wal-E was just visiting, which he sort of was, and that he’d go home with her when she left Casa Corona del Mar, neglecting to mention that this wouldn’t be for another four months. Ismael didn’t completely buy Wendy’s story, however. He told her Wally could stay, temporarily, but only if he was always on a leash. Always. Even inside Casa Corona del Mar.

Which is why, yesterday afternoon, Wal-E was tied to my teak chaise lounge, driving me crazy while he barked incessantly at the pelicans as I tried to enjoy one of Marta’s fresh-squeezed lime juice margaritas while finishing my Jon Krakauer book about those violent Mormons. And this is why it was so difficult to explain to Wendy what happened to Wal-E as I dozed off after another margarita or two. The leash was still there. Only Wal-E was gone. Needless to say, I felt horrible. But I’m sure Wendy will find him. Hopefully before Ismael does.