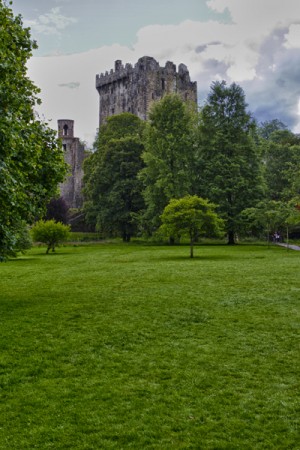 When you get to Blarney Castle, says Mr. O’Connor, ask for Jean Murphy. She’ll get your tickets. So at the turnstile I ask for Jean and am told she no longer works here. Bit embarrassing that. Explain to the woman that we’re journalists and she says just a minute and wanders off. Meanwhile, the line behind us grows anxious. And it’s starting to rain again. Mr. Lynch and I are the only ones in line standing under cover. What’s the problem then? says a woman with two young ones at her side and a stroller in front of her covered with a baby’s pink blanket.

I smile and shrug. Nasty looks all around. Line continues to grow. So does the disgruntled nature of those behind us. Woman finally arrives back at the window and hands us our tickets. Thank gawd says the woman with the stroller.

Where’s the castle then? I ask Mr. Lynch. Like everyplace in Ireland, he’s been here several times. Yet he’s never kissed the Blarney Stone. I asked him why over breakfast this morning and he told me a story about bored guides at the castle ending their shifts by pissing on the stone that’s kissed by thousands each day. Sure that’s just an urban legend, I tell him. Maybe, he says, buttering his toast, but even if it is, think of the number of people mashing their maws against that stone every day. You really want to kiss something like that?

Probably not but I’m not going to come all the way to Blarney and climb the 127 narrow steps to the top of the keep and not kiss the stone. Piss or no piss.

The rain starts coming down heavy enough that we take refuge with several others beneath an ancient yew tree. At least this time I’ve brought a rain coat so I can tuck my camera between my sweater and my coat. The rain stops, the clouds flee, and it’s blue skies again. Odd country this Ireland.

Across a bridge, the stream down below filled with coins. Thousands of them. Maybe enough to cover Ireland’s debt. The mom with the toddlers and stroller stops on the bridge. Little ones want coins to throw in the stream. Mom gives them one each and tells them to throw them as far as they can while making a wish. The boy, not more than three or four, flings his coin but it only goes a few feet away. He starts to cry. What are you crying about? says him mom. It doesn’t matter how far it goes. Your wish will still come true. What did you wish for? An ice cream, says the boy. Ah, well, we’ll see about that, says the mom.

No doubt he’ll get his wish. But I wonder how many wishes lofted skyward along with the coins in the stream also came true? No many, I think. No many at all.