Would you like a heart attack with that hot dog?

“Oh a completo,” she said. “You definitely haven’t been to Santiago until you’ve had a Dominó completo.”

Okay, before I explain about completos and Dominó let me just say that the closest American comparison to both would be a Big Mac at McDonald’s, and I haven’t been inside a Mickey-D in over 20 years. Just not my thing (besides, I’ve always hated clowns and Ronald definitely creeps me out).

But the completo is not a hamburger. It’s a Chilean hot dog. Sort of. Actually, it’s a bun of mayo and mushed avocado piled on top of a sliver of weiner. Remember I said that Chileans think mayo is a food group? This may be the best proof of that theory. But, you know, I have this philosophy about travel which boils down to, Wherever you go, you have to eat the goat. And since Liz says that I haven’t been to Santiago until I’ve had a completo, the goat today is a Chilean hot dog at Dominó. 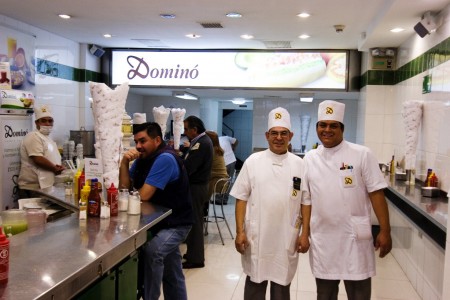 The hot dog doctors at Domino. Photos by David Lansing.

There must be two hundred Dominós in Santiago. Okay, maybe it just seems that way because everywhere you go, there they are. They’re meticulously clean (which is true for most fast-food joints in Santiago). And just as all the servers at Fuente Alemana are women, at Dominó they’re all men. Dressed in long white gowns with deep pockets in the front so that they look more like medical assistants than waiters (I think they should put stethoscopes around their necks).

So Liz and I go into a Dominó and order a completo. The waiter takes my order and, without turning around, yells over his shoulder to the cook, “Italiana, maestro.” Why Italiana? Because it has chopped tomato, avocado, and mayo on it—red, green, and white, the colors of the Italian flag (also the colors of the Mexican flag but I guess they figured it didn’t sound as much fun yelling, “Mexicana, maestro.”) 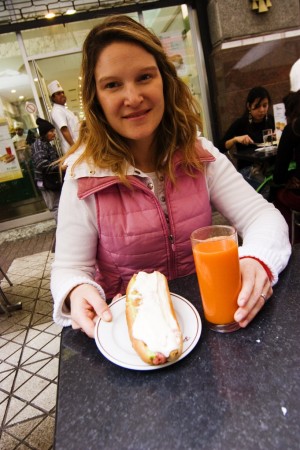 Liz with a completo (not healthy) and carrot juice (healthy!).

Anyway, the other thing that kills me about Dominó is that they have these wonderful milk drinks with mango or chestnuts and fresh squeezed juices, the most popular being a blend of orange and carrot juice which is just so healthy tasting that your blemishes seem to clear up after drinking a glass. So of course, Liz orders a completo, which will double her cholesterol level the minute she puts it in her hand, and a fresh-squeezed glass of orange and carrot juice to somehow do a negative ion thing in her body to reverse the 640 calories she’s about to eat so that somehow she’ll actually lose 5 pounds from eating the weiner. Or at least that’s what we tell ourselves.

I take a bite of my completo. I’m sure there’s a hot dog in there somewhere, but I can’t see it and I don’t taste it. All I taste is a big mouthful of slippery avocado and sweet mayo. One bite and I’m done. (When I said you have to eat the goat I didn’t say you had to eat the whole goat.) But, hey, that orange/carrot juice is great. So great that I decide to get another (plus the roof of my mouth still feels coated in mayo fat). And while I am gone, a homeless lady steals my completo.

The perfect ending as far as I’m concerned.