You are currently browsing the monthly archive for August 2009.

Charles and I are at Port Askaig waiting for the ferry to Jura. Since we’ve got about an hour to kill, I suggest we go somewhere for a beer. 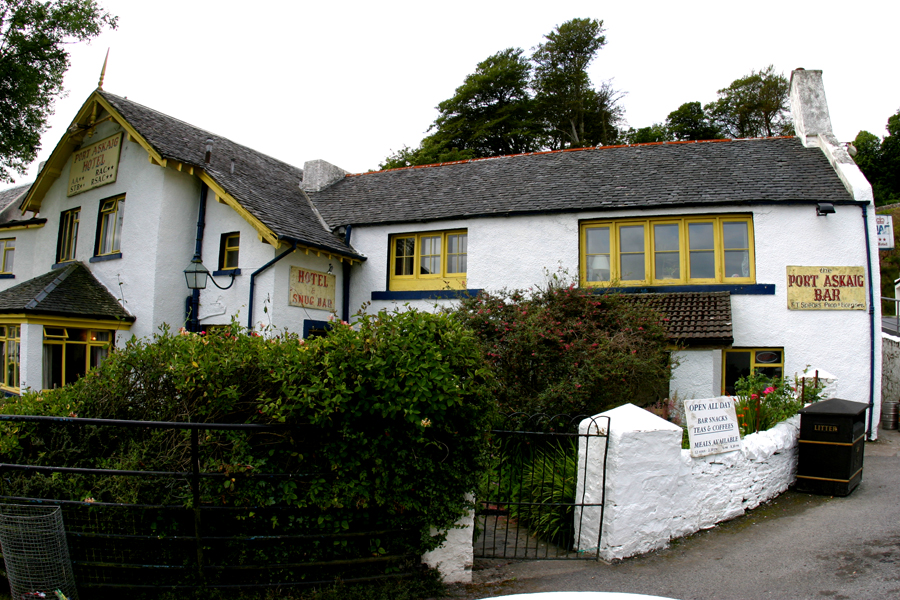 The Port Askaig hotel bar; too civilized for us. Photo by David Lansing.

“There are only two pubs around here,” Charles says. “The bar at the Port Askaig Hotel, right next to the ferry landing, is terribly civilized. I’d suggest that.”

“What about the other place?” I ask him.

He shakes his head. “It’s just down the street but I couldn’t recommend it to you. It’s the sort of place where you walk in to the crack of cue balls and the sound of women fighting.”

So that’s where we go.

Unfortunately, there are no women fighting when we show up. Too early in the day, Charles says. While we sip on our drams of 10 year old Bruichladdich (with McEwan backs), Charles tells me a bit about Jura.

The ferry takes only five minutes, he says. In fact, the Sound of Jura is so narrow here that often times deer will try to swim across it, thinking Islay’s hills look greener. 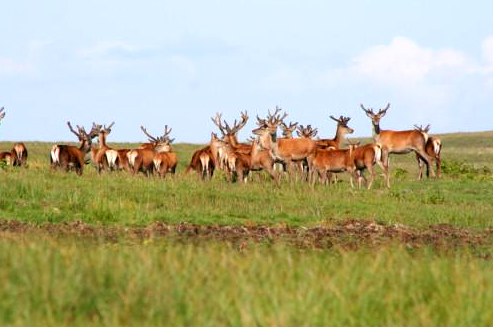 Herd of red deer on Jura.

“Not many make it,” he says, “but you hear stories every once in awhile of a fisherman catching one in a net.”

Charles says there are 170 people on Jura and at least 6,000 red deer. “Even in 1800 there were 2,000 people living on Jura. But not anymore.” There are so many deer on the island that even though they allow hunters to shoot almost a thousand deer a year, it doesn’t make a dent. In fact, says Charles, slugging down the rest of his whisky, there are so many deer on Jura “it’s a wonder they have not yet kicked the islanders off in a revolt.”

And with that we head back to Port Askaig and the ferry. 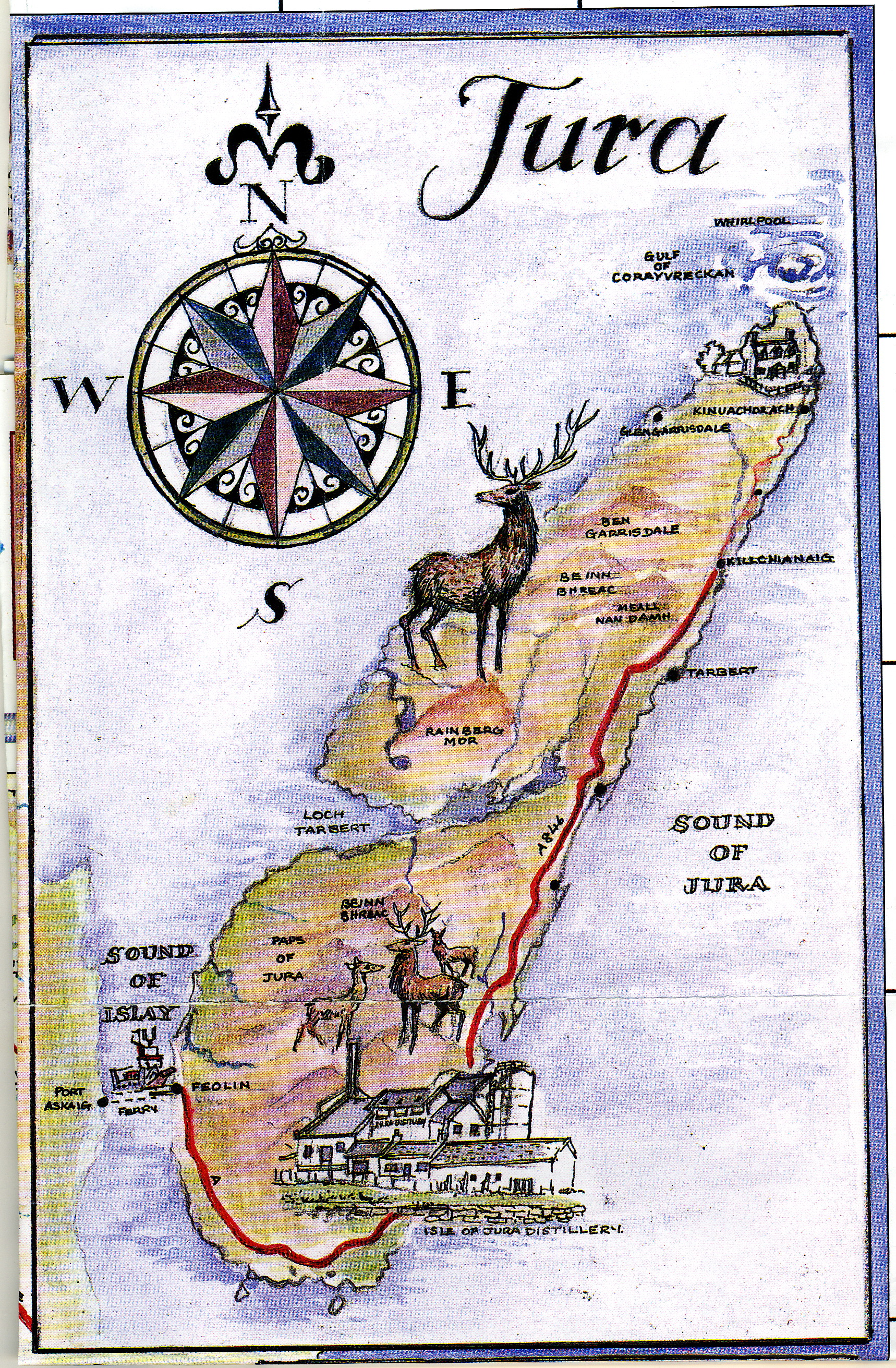 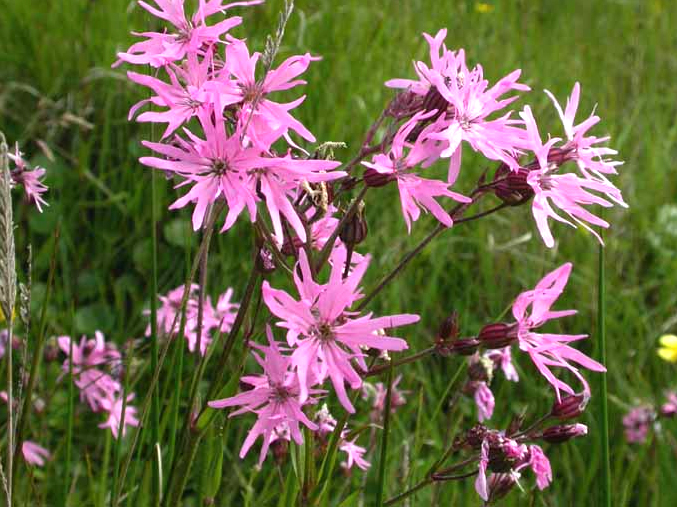 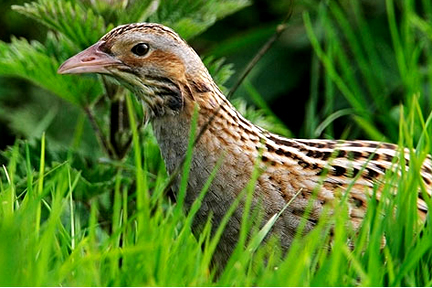 Bruichladdich: the bad boys of whisky

I’d always sort of imagined whisky distilleries as being bustling places with lots of red-faced Scots scurrying about doing this and that. But actually it doesn’t take many people to make whisky. A handful, really. And if you visit a Scottish distillery this time of year, you’re likely to find it mostly deserted. Or closed (many traditionally do maintenance in August or just shutter the doors completely). 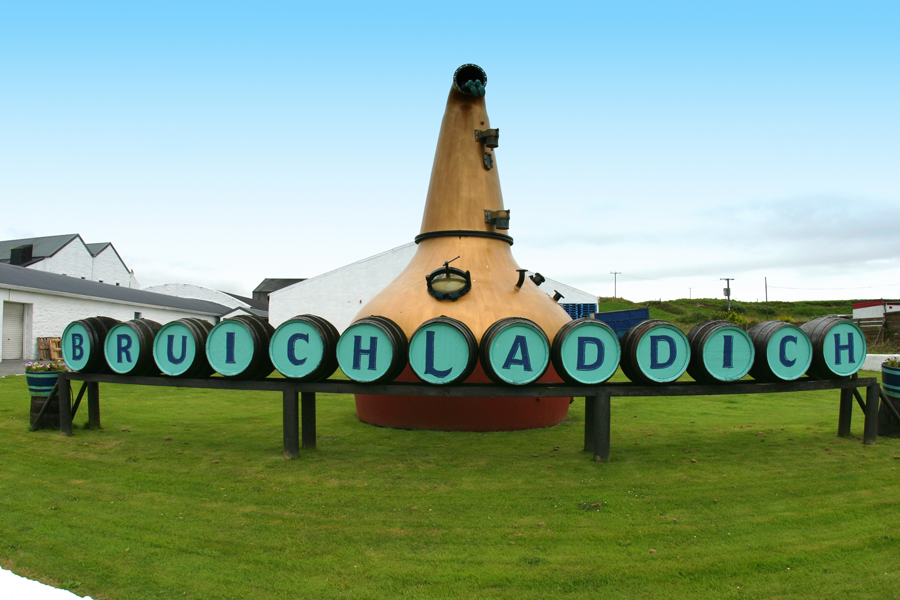 That was pretty much the situation at Bruichladdich (brook-laddie) when Charles and I showed up this morning around 10. The gates were open but we didn’t see a single soul on the premises. Eventually we ended up in the little shop that serves as a visitor center of sorts where a middle-aged woman reading a book seemed surprised to see us.

She said the only one around at the moment, other than herself, was one of the four partners, Andrew Gray, and he’d be happy to show us around if she could only find him. So while she’s out looking for Andrew, let me tell you a little bit about this unique distillery.

Bruichladdich itself closed for a spell in the late ‘80s before being acquired by four separate corporate owners (including Jim Beam and Fortune Brands) from 1992 to 1994. But nobody really seemed to know what to do with the company and in 1994, the distillery was pretty much closed down for good, devastating the town on the west coast of Islay.

Then four friends—Mark Reynier, Simon Coughlin, Jim McEwan, and Andrew Gray—got together and purchased the closed distillery in December 2000. After months of restoration work, Bruichladdich officially reopened on May 29, 2001 before a crowd of 3,400 ecstatic islanders (a good chunk of the population). They now have 47 employees, all from Islay, and in just a few short years have won a number of prestigious awards, including Distillery of the Year three times. Kind of a nice story, don’t you think, particularly in an age when most of the Scottish distilleries are now owned by huge international conglomerates like Diageo (in fact, the company, whose philosophy is to be “fiercely independent, non-comformist, and innovative—the enfant terrible of the industry” refuses to join the Scotch Whisky Association because, they say, “We feel our independent status and freedom of expression would be compromised” by the council whose board includes three members from Pernod and three from Diageo).

Anyway, Andrew was eventually rounded up and for the next couple of hours, we sat around with him loosely discussing Islay whiskies in general and Bruichladdich in particular. 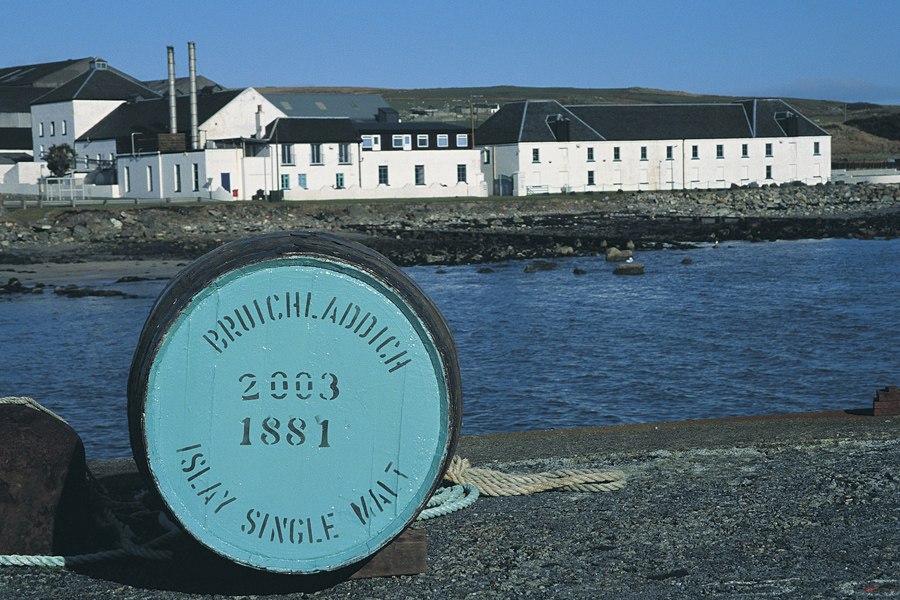 “The characteristic of the western islands is they get a lot of rain—as much as 160 inches a year. So the ground is very wet and there are lots of bogs. Peat is a primary heating source and the whisky coming from Islay have a real smoky, peat flavor that people either love or hate—there’s no middle ground with this whisky. Plus all the distilleries are situated by the sea. The casks are all maturing in a briny, salty atmosphere. There’s often salt caked on the outside of the casks. It seasons the casks and gives them a different flavor.”

Then Andrew immediately contradicted himself by pouring us a dram of a new Islay single malt they’re distilling called Octomore. Now I love Laphroaig but I have to say I could hardly swallow Octomore. Andrew chuckled at my reaction. “That’ll put hair on your chest, eh,” he said. To be sure. The whisky, which Andrew calls “for serious peat freaks,” has a mind-boggling 131 parts of peat per million.

With the subtlety of a sledgehammer, it’s definitely not for everyone—including me. But I love the idea that these “fiercely independent, non-conformist” whisky makers, who brought this distillery back from extinction, have the balls to make it. It’s certainly not something you can imagine Pernod or Diageo ever doing. 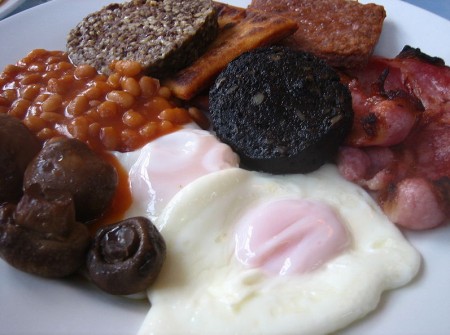 Charles and I were both downstairs early this morning, anxious to tuck into the Port Charlotte Hotel’s Full Scottish Breakfast, or FSB as Charles call it. There are small variances from inn to inn, of course, but basically a FSB includes a starter of porridge and perhaps canned grapefruit slices followed by a heaping plate of rashers (bacon), black pudding (blood sausage), sausages, eggs, grilled tomato, mushrooms, baked beans, and Tattie scones (potato scones). The Port Charlotte also offers plate-sized kippers or “Arbroath smokies” (smoked haddock) if you’re not a meat eater. Along with juice and coffee or tea, of course.

As Charles said when our meal arrived, “A pretty standard FSB.”

Over breakfast we talk about our upcoming day which includes a visit to the Bruichladdich distillery and then a short ferry ride over to the island of Jura. When I suggest we take a look at the map to plot our route, Charles waves me off.

“There’s only one road,” he says indignantly. “We can hardly get lost even if we’d like to.” 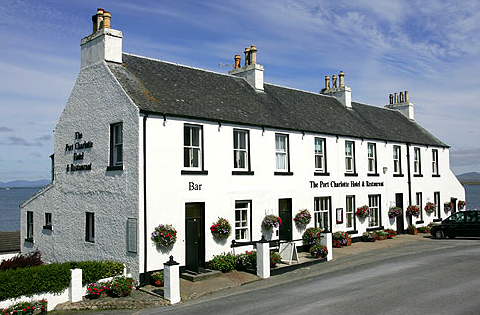