You are currently browsing the monthly archive for July 2013.

Searching for Elvis in Anguilla The Band’s official driver, Mr. Glennis Connor, the Anguillan Patron Saint of Lost Luggage, evidently needed a break as well since instead of giving us a musical tour of Anguilla, as he’d promised, he asked Lloyd to do it. Lloyd is good. Nothing against Lloyd at all. It’s just that he’s not Mr. Glennis Connor.

We told Lloyd our mission was to make a musical pilgrimage around Anguilla. Get inspired. Hear the sounds, dig the beat, feel the love.

“Well then,” said Lloyd as we pulled away from Cap Juluca, “I suppose the first thing you’ll want to see is Elvis’.”

We all perked up at that. Even The Man, who had had a very late night, sat up straight and opened his eyes for the first time all morning. “Is Elvis in the building?” asked The Man.

“That’s hard to say,” said Lloyd. “Sometimes Elvis is in the building and sometimes he’s not, if you know what I mean. But we can go by and see.”

Now it just so happens that Elvis’ is next door to Johnno’s. The thing is, Johnno’s is more of a jazz joint. On a typical Sunday there, you’re likely to catch Mo Melin on sax, Peter Sorton on bass, and Jaiden Fleming on drums (or sometimes Fred). Whereas Elvis, of course, is more old school. We asked Lloyd how Elvis was doing. He said he’s good, that these days he’s thin and lanky, the way he used to be (before Vegas). And that if he was around, we’d probably find him behind the 16-foot-boat-turned-bar pouring his signature drink, Elvis’ Rum Punch (Mount Gay rum, Amaretto, oj, pineapple juice, guava juice, lime juice, bitters and nutmeg).

So we went to Elvis’. The bartender told us he was out at the moment. So we ordered a round of rum punches. And then another. Just, you know, for inspiration while waiting for Elvis. 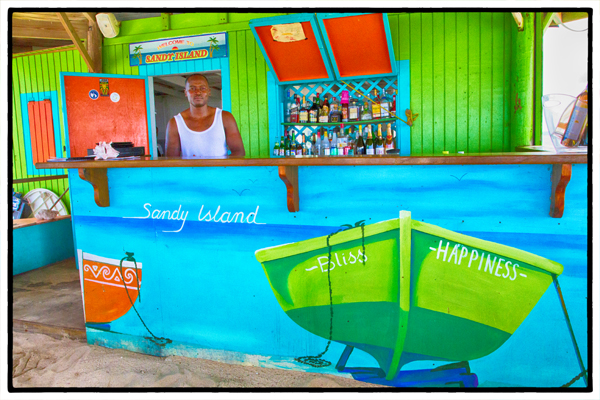 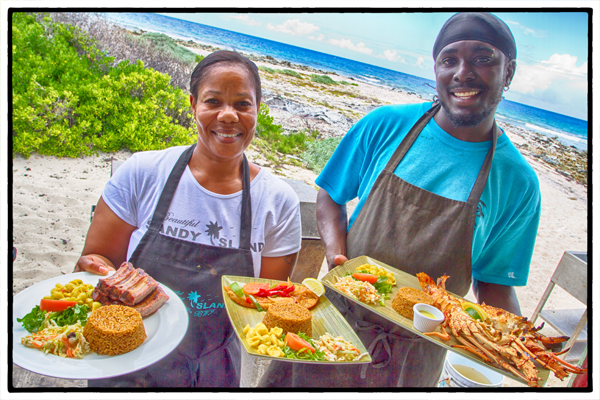 Waiting for Happiness at Johnno’s 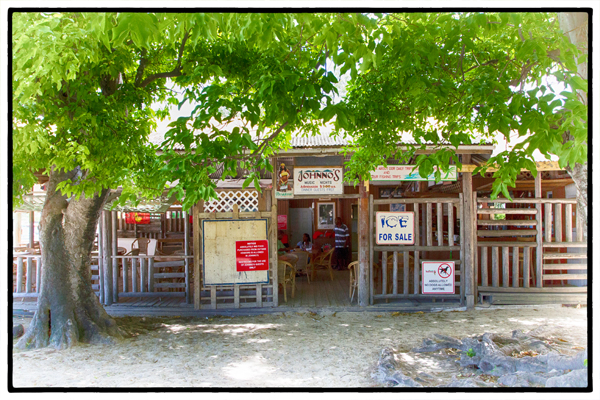 Johnno’s at Sandy Ground on Anguilla. Photo by David Lansing.

Glennis drops us off at Johnno’s in Sandy Ground and tells us to wait there until Happiness comes to pick us up.

“When will Happiness be here?” I ask him.

While Luscious and I are waiting for Happiness, I wander in to Johnno’s. Glennis told me that Johnno’s makes their own hot sauce and it’s excellent. There’s not much going on in Johnno’s shortly before noon on a Thursday. There’s a man in a green shirt drinking a beer by himself and a young woman behind the bar washing glasses.

“I hear your hot sauce is pretty good,” I say to her.

“Your hot sauce. Glennis told me you make your own hot sauce. You know Glennis, right?”

“Oh sure. Everyone know Glennis.”

“Do you sell your hot sauce?”

“Your hot sauce…do you sell it?”

“Naw. It’s just…” and she reaches down beneath her and brings up a condiment jar of a murkey brown and gray liquid. “We don’t bottle it,” she says. “It’s just in a big pot in the kitchen.”

“The hot sauce…can I taste it?”

She pushes the jar over the bar towards me. “I don’t suppose I could disturb you for a spoon?”

She finds a spoon and slides it across the bar. I dip it in to the jar of hot sauce and put the tiniest amount on my tongue.

I shrug, shove the spoon back over the bar, and go back outside where Luscious is sitting at a wooden picnic table on the sand waiting for Happiness. She asks me what I’ve been doing.

“Eating hot sauce,” I tell her.

“It was awesome. But don’t tell them that.”

Luscious nods towards the dock where a small boat is pulling up. “I think that’s us,” she says, standing up and grabbing her bag. 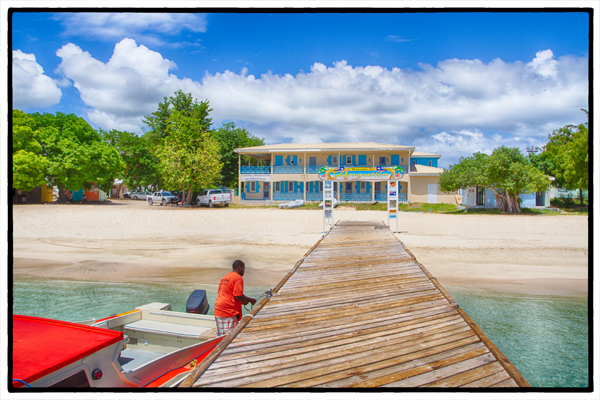 Happiness is just waiting to take us to Sandy Island. Photo by David Lansing. The view above Sandy Ground, Anguilla. Photo by David Lansing.

Our band mates still hadn’t arrived so shortly after breakfast this morning, Mr. Glennis Connor, Anguila’s Patron Saint of Lost Luggage, pulled up in front of Cap Juluca to take Luscious and me to the dock where we were to catch a boat to Sandy Island.

I still haven’t been able to get myself oriented on the island. All the roads twist and turn, going this way and that, and one minute the water is on your right side and the next it’s on your left, so it’s all very confusing to me. I started to ask Mr. Connor a question about the island’s history but he shut me down.

We drove hither and thither and yon (I don’t think I’ve ever used that phrase before; it’s kind of nice) when suddenly Mr. Connor stopped the car along the side of the road.

“I’m going to show you something but I don’t want you to ask me any questions about it,” he said.

Luscious and I got out of the car and Mr. Connor took us across the road to a bluff. Nodding his head, he said, “That’s Sandy Ground.”

We were on a bluff looking out over a perfect Caribbean bay, the water six shades of green and blue, the hills an equal number of shades of green. Sailboats were anchored in the bay and a long dock extended like a bony finger across the green-blue water. Lovely. But nothing we could ask questions about.