You are currently browsing the monthly archive for January 2012.

No penguins for Mick Orion’s expedition team leader, Mick Fogg, sat down at lunch with me today. He wanted to apologize for sending me on the Oyster Lovers Tour in Cole Bay when there were no oysters. Not a problem, I told him. There was nothing anyone could do about it. It was just the weather. Besides, I said, I got my oyster.

“So I heard,” said Mick, laughing.

He’s a great guy, Mick. Way over-qualified to be doing a Tasmanian food and wine cruise. Mick has degrees in Marine Biology, Marine Chemistry, Physical Chemistry and Geographic Information. He also ran James Cook University’s field research station at Orpheus Island for five years. So taking guests around Wineglass Bay or to various Tasmanian wineries isn’t exactly the most challenging thing in the world for him. Still, he’s been a good sport about it and I’ve certainly enjoyed his company. I asked Mick what was his favorite Orion expedition cruise (he’s been doing this for five years) and he said going down to the sub-Antartic islands like Macquarie, a World Heritage site and home to 850,000 royal penguins, 150,000 breeding pairs of king penguins as well as rock hopper penguins, gentoo penguins and elephant seals. “You stick out a wide-angle camera in front of the penguins and they just fill up the entire viewfinder,” he said. “It’s the most amazing thing you’ll ever see.”

I think I need to come back to Tasmania some time for that cruise.

Mick’s gorgeous wife, Corina, is also on the ship. She helps out organizing the expeditions and does a hundred other tasks as well. Like everyone on board, she’s happy to help out wherever she is needed. Corina is also very pregnant (due mid-March). After we dock in Hobart, the Orion picks up a new load of passengers and heads off for an 18-day expedition to Antarctica. Mick and Corina won’t be on that voyage. They’re getting off with us in Hobart and flying home to prepare for the birth of their first child. And, penguins or no penguins, they’re both very excited about spending a little time at home and preparing for Corina’s upcoming birth. As well they should be. 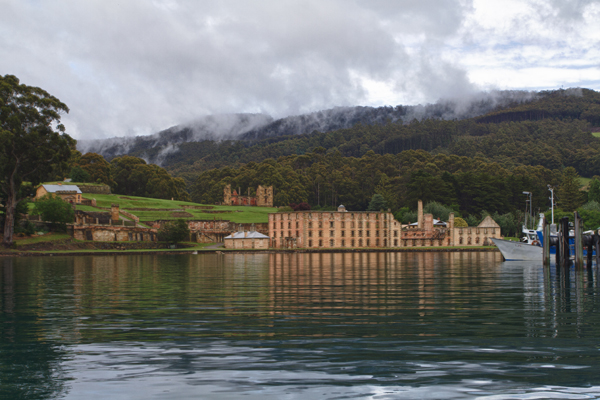 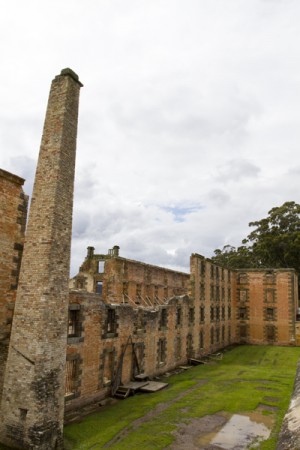 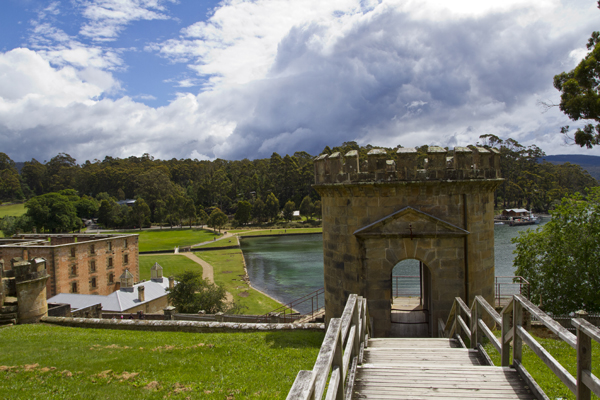 The typical reaction, when I told people I was going to Tasmania, was, “Wow…Umm, where is that exactly?”

Just to be clear: Tasmania is 150 miles south of Australia. It is not a country; it is an Australian state. Like Victoria. Or New South Wales. It is the size of Ireland. Or West Virginia. Some say its profile on the map looks like a human heart. Others say it’s like an apple with a bite taken out of it.

Here’s what one Tasmanian author has written about his country: “In Tasmania the population—sometimes referred to as Tasmaniacs—was so backward and inbred that visitors were advised ‘to grow an extra head’ (in Hobart you can buy a T-shirt with a spare hole).”

This reputation, unjust, is a result of its history. There were basically three types of Brits who first came to Tasmania in the early 1800s: convicts, prison wards to guard the convicts (who were often ex-convicts), and the black sheep of British aristocracy; usually men, but sometimes women, who had made a mess of things back home or were disgraced for one reason or another and were quietly sent packing to this secret, rarely visited island, where, it was hoped, they might make a fresh start. Sometimes they did; usually they didn’t.

The most interesting Tasmanian story to me is the island’s role as a dumping ground for convicts from all the U.K. colonies. In the fifty years from 1803 to 1853 some 75,000 convicts were transported to what was then called Van Diemen’s Land. That’s a lot of convicts. Particularly when you realize that according to the census of 1847, the island’s total population was around 70,000 people; of those, it was estimated that just over 50% were, or had been, convicts.

I mention all this because this morning we dropped anchor in Port Arthur, without doubt the most notorious penal station in Tasmania if not all of Australia. From 1833 to 1877 it was used as a punishment station for repeat offenders from England, Ireland, India and Australia. They say that even today, there is an air of sadness so strong hanging over the former prison grounds that it is palpable. No doubt it will be sad. But it’s something I feel I have to experience.

You can call me Ray 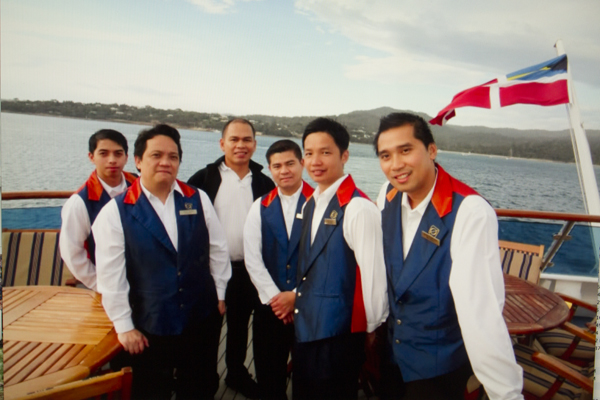 The Orion bar staff. Ray is third from left in the black jacket.

Just about everyone taking care of us on the Orion—waiters, bartenders, housekeepers—is Filipino. They are the most gracious people in the world. I’m particularly partial to Ray who makes me a latte every morning before I even ask for it and gives me a particularly generous pour of Tasmanian Pinot Noir in the evening. These people seem born to smile and seem genuinely happy to be doing their jobs. Despite the fact that they are thousands of miles away from their villages and families and, on average, work for four months solid on the ship before going home for a break. Let’s face it: It’s not an easy life.

So I have very confused emotions about the staff. I like them, I respect them, I appreciate what they are doing for me. But, to be honest, I also feel more than a bit embarrassed when they address me as “Sir David,” or when I see them setting up the dining room at six in the morning when I know they were still working at eleven last night.

Here’s the other curious thing: Almost the entire Filipino staff wears badges bearing Anglicized names. Ricky, Ray, Eric, Alex, Charles. Would a Filipino mother in a little village in Cebu or Batanes really name her baby boy Alex or Eric? Or is that just the name they take for themselves on the ship to make it easier for white boys like me to remember them?

Last night when Ray came over to my table and asked me how my day had been while slowly pouring me a glass of Frogmore Creek Pinot, I asked him if I could ask him a question.

“Is Ray your real name?”

He seemed startled by the question. But he gathered himself, put a light hand on my shoulder, and smiled. “Of course, Sir David. What else would it be?” 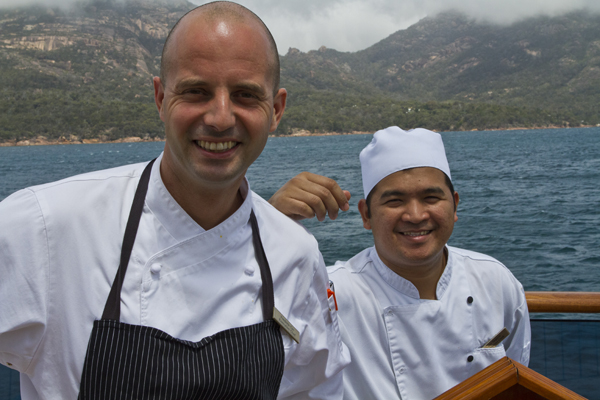 Since the Orion is providing us with a Tasmanian food and wine focus, and there are only 63 passengers, it probably won’t shock you when I say the food has been extraordinary. A sampling from the dinner menu: fillet of local blue-eye trevala; Cole Bay scallops in basil butter; slow-cooked loin of local lamb; olive oil poached Tasmanian ocean trout; summer salad leaves with Tassie blue cheese dressing.

The key, of course, is that almost everything executive chef Frederic Cyr (from Montreal) cooks up is local. The seafood, the lamb, the produce, the fruit, the cheese, and even the wine. The dinners have been as good as you’d find in the finest restaurants in Australia and Frederic tells me he can do that because he is working with such premium ingredients and because he doesn’t have to make hundreds and hundreds of plates of the same thing.

And I have to say that as excellent as dinner has been, I’ve also looked forward to lunch and breakfast—and I’m not a breakfast guy. I don’t really care about the omelette station or the toasted bagels with Tasmanian smoked salmon and capers (although certainly the other cruisers seem to appreciate them); what I look forward to is a big bowl of fruit. It’s extraordinary. I can’t remember the last time I had honeydew melon that tasted so, so…well, honeydoish.  I mean, I just linger over every bite. Same with the rest of the fruit, which is almost all coming from local sources (remember that it’s the start of summer down here), right down to the luscious Bruny Island strawberries. So good.