You are currently browsing the monthly archive for April 2012. 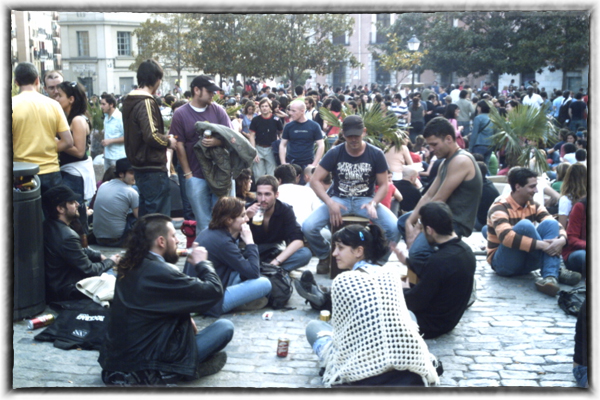 The best wines of Madrid 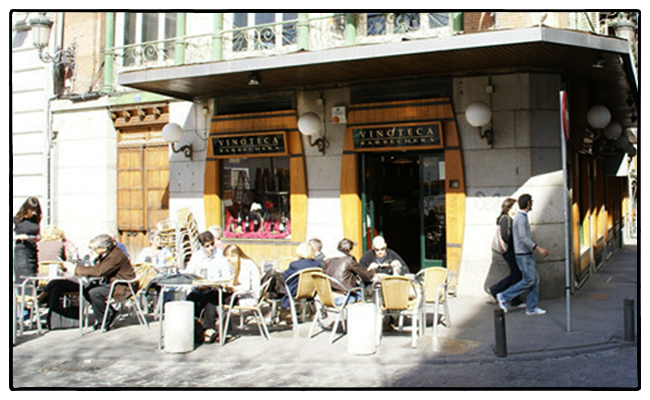 The Vinoteca Barbechera is a good wine bar for sampling the wines of Madrd.

Wine has been produced on the plateau surrounding Madrid since the Reconquista. Christian conquerors planted vines as a sort of agrarian border, marking their progress as they gradually took the Iberian Peninsula back from the Muslim states of al-Andalus. Not all that long ago, the local stuff was sold from barrels, not bottles, and was ordered as either vino tinto or vino blanco.

These days, you’ll find even the humblest tapas bar offering lovely bottles of Madrileño wine with a Vinos de Madrid DO label on the back. A good example is Vinoteca Barbechera, a classy little bar across from the Plaza Santa Ana, known for their pincho de solomillo and a great selection of local wines. The Grego Garnacha Centenaria, a refreshing red wine from Madrid, goes perfectly with the house specialty, a tender fillet of beef. Or order a glass of Cuatro Pasos, made from mencia, which tastes very fresh and fruity – almost like a Beaujolais – with roasted apple and foie gras on crisp toast.

When it’s time to pick up a few bottles to take home with you, two of the best wine stores in Madrid are Lavinia and Bodegas de Santa Cecilia. Lavinia is organized like a library, with knowledgeable clerks happy to help you find everything from an expensive Ribera del Duero to a bargain-priced vino de Madrid. Look for Rincón, a syrah-garnacha blend that has a lovely hint of vanilla on the nose. If you’re having trouble making up your mind, there’s an elegant wine bar upstairs for sampling by the glass.

Most Madrid bodegas aren’t open to the public, but there are a few exceptions. The most welcoming is Qubél, half-an-hour south of Madrid in Pozuelo del Rey, where owner Carlos Gosálbez, a former pilot for Iberia who speaks excellent French and English, is happy to pour you his organic blends of tempranillo, cabernet sauvignon and syrah. Also worth a visit is Cuevas del Real Cortijo de San Isidro, a historic winery near Aranjuez, founded by Carlos III in 1782. Their Madrileño wine, Homet, which is mostly tempranillo with a bit of cabernet sauvignon, merlot and syrah mixed in, can be sampled in their recently refurbished visitor centre. 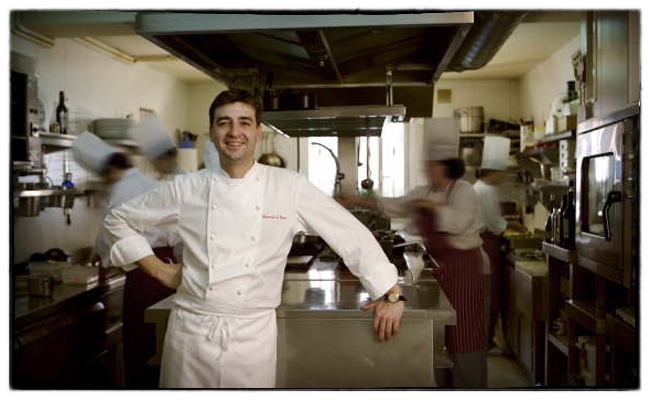 Back in the 1950s, Jose and Maria del Cerro, who lived across the street from the local farmers’ market in Aranjuez, decided to open up a simple little restaurant in their home where they prepared lunches for the farmers, herders, and traders who worked at the market. Now, since Aranjuez was known for its produce—artichokes, Brussel sprouts, asparagus, cabbages, celery, strawberries—their menu focused on what was local and what was fresh.

The couple had five kids, all of whom helped out at mom and dad’s restaurant. One of the kids, Fernando del Cerro, took a particular interest in cooking. And so in 1991, he reimagined his parent’s modest farmhouse restaurant and opened Casa Jose which, within a year, had earned a Michelin star.

This is where Alicia was taking me to lunch. We had a reservation for two but when we arrived at about 1:45, Fernando’s brother, Armando—the restaurant’s sommelier—told us Fernando wasn’t quite ready yet to open the dining room upstairs (you know how the Spanish like to eat late). So he poured us both a glass of cava and we sat around the bar with the locals who were drinking a glass of wine and munching on tapas, particularly the restaurant’s pincho de tortilla. (When I pointed out to Armando that just about everybody in the bar seemed to be eating tortilla de patatas, he smiled and, not without pride, said, “En cuanto a la tortilla, es verdad que es maravilloso,” or “As for the tortilla, it is true that it is wonderful.”)

Before we could finish our cava, the hostess came over and led us up the wooden steps to the upstairs dining room with its high pine ceiling. Fernando, like his parents, is a big booster of the local produce. His menu changes along with the seasons which, he admitted to me after our lunch when he stopped by our table to see how we’d enjoyed things, can be frustrating. “It is a bit annoying when people come here in November or December and want the local asparagus or the strawberries,” he said. “There is no respect for the seasons. Everyone thinks things should be available every month of the year, but that’s not the way I cook.”

Fortunately for us, much of the wonderful local produce was in season. So we had Fernando’s glazed artichoke hearts with sea urchins; baby Brussel sprouts and prune bread wrapped around foie gras and an oyster; paletilla (lower leg) of baby lamb baked with green garlic; and, of course, the local strawberries with a Chantilly cream of roses. 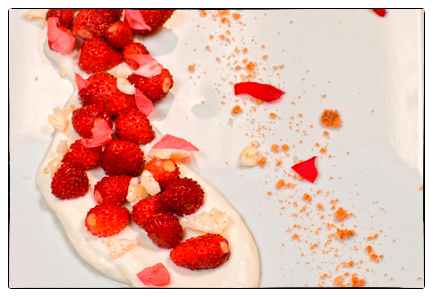 I asked Fernando about the local strawberries. He told me there are two kinds: fresas and fresones. The tiny fresas, he said, are like the French fraises de bois, while the slightly larger fresones were brought to Aranjuez around 1700 from the Americas (which is probably why they reminded me of the east coast Gariguette strawberries). “Both varieties are hand-harvested in Aranjuez in April and May, and only when completely ripe,” said Fernando. “You are very fortunate to be enjoying them today.”

And he was right. The tiny berries were so perfumed, so juicy, and so floral that I would hold each on my tongue and let it just melt in my mouth. An incredible spring treat. 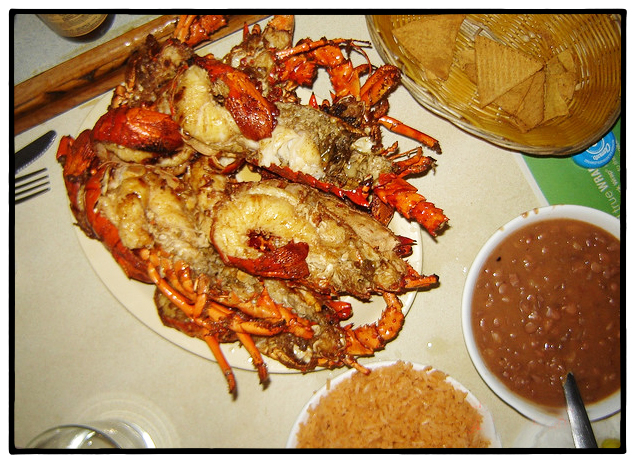 From our Los Angeles correspondent:

I haven’t been to Puerto Nuevo, the little lobster village south of Tijuana, in ages. We used to go a few times a year, making the drive down to Tijuana to do a little shopping and then heading further south for dinner at Puerto Nuevo. To be honest, the food was never that great. It was good—but not great. When I first started going to Puerto Nuevo, back in the late ‘80s, the lobsters were caught by the local fishermen. But then the dusty little village became a popular daytrip for half of California and the restaurant up and down the town’s two dirt roads couldn’t keep up with demand. The lobsters were frozen. And from the East Coast. But they were still pretty good. And relatively cheap.

Maybe a dozen restaurants in town all serve the same thing: lobsters split in half and fried in lard with garlic, beans, rice, and tortillas. Simple. But, like any simple dish, some did it better than others. The trick is in the preparation; cook the lobsters too long, and they become rubbery and tasteless.

Over the years I’ve developed my own Puerto Nuevo-style lobster. Which is to say, I take the basic idea (split lobsters served with Mexican beans, rice, and tortillas, and adapted it in a way that, I think, far excels the original. Here’s my recipe.

–4 medium fresh or frozen lobsters (about a pound each)

–half a stick of butter

–1 tablespoon sauce from a can of chipotle chilis

For Chipotle Lime Butter: Heat butter over low heat and add garlic just long enough to release its aroma (about 2 minutes). Stir in sauce from chilis, lime juice, lime peel, and salt. Stir just until salt dissolves and everything is well mixed. Remove from heat.

For lobsters: Bring a large pot of water to a fast boil and drop in two whole lobsters. Cook, covered, for three minutes. Remove lobsters to a cookie tray and put in next two lobsters (making sure water is again at a boil) and repeat process.

Transfer lobsters to a cutting surface. Place face down. Place tip of large, sharp knife in the center of the lobster and cut lengthwise in half from center to end of head, then in the other direction from center through tail. 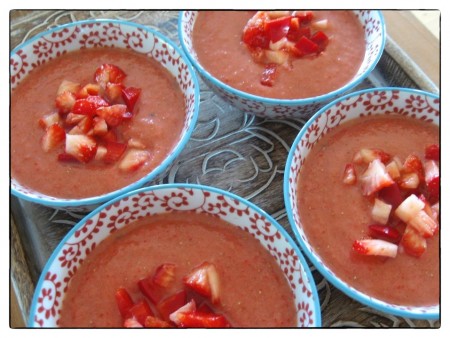 Anyway, the strawberries from Aranjuez are delicious—and expensive (about 4 or 6 euros for a large basket). Tasting them reminded me of a strawberry gazpacho I had at a friend’s house in Barcelona years ago. It makes for a very refreshing lunch on a warm spring day. Here is my friend’s very simple recipe:

Wash and hull the strawberries. Chop all the ingredients finely and press through a chinois or fine mesh sieve. Chill for at least an hour and decorate with chunks of strawberry wedges or pearls of watermelon.