You are currently browsing the monthly archive for July 2010.

Our cast from Cataract Canyon 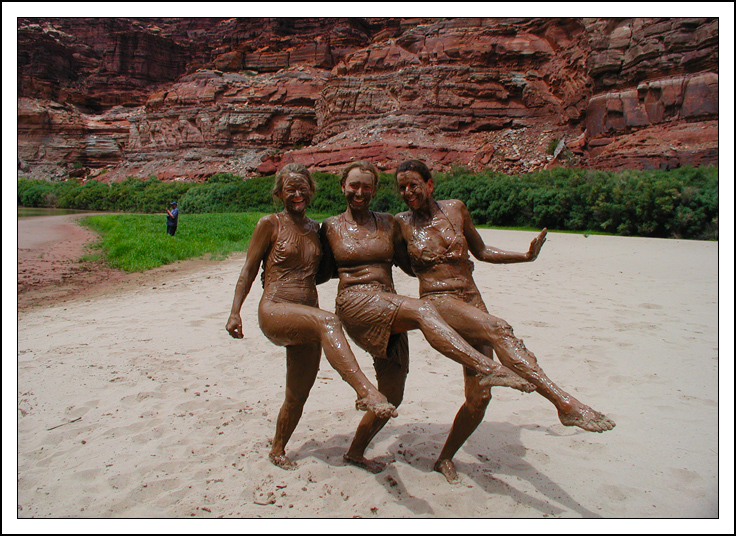 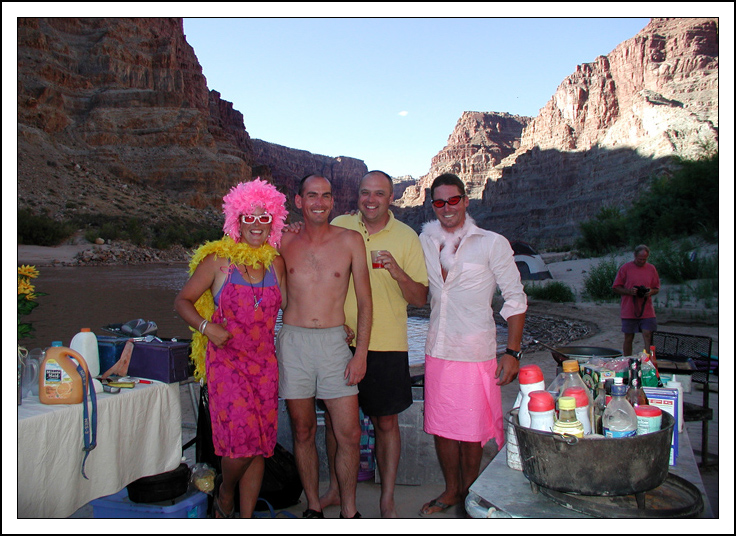 Sarah Jane, our cook, with Brian, the River Buddha, and Brian the swamper. 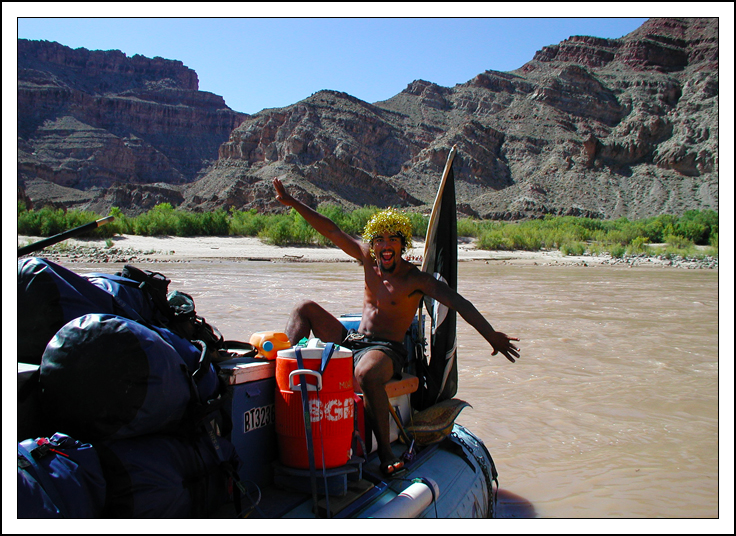 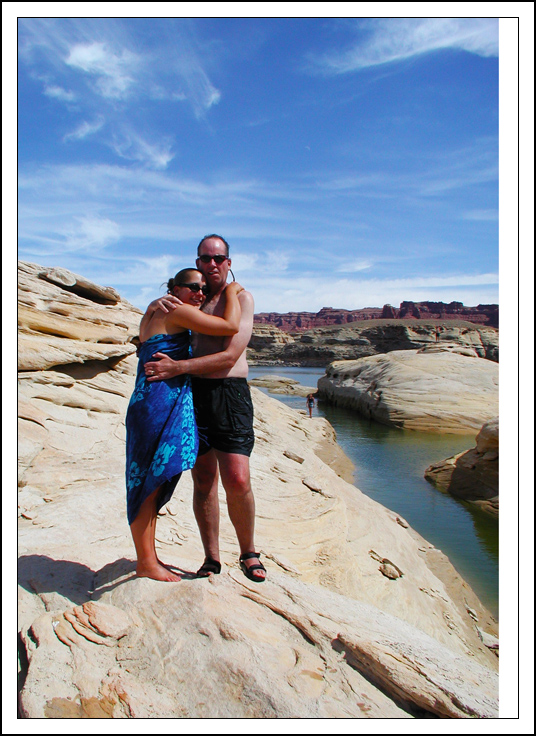 The author and his daughter.

The end of the journey 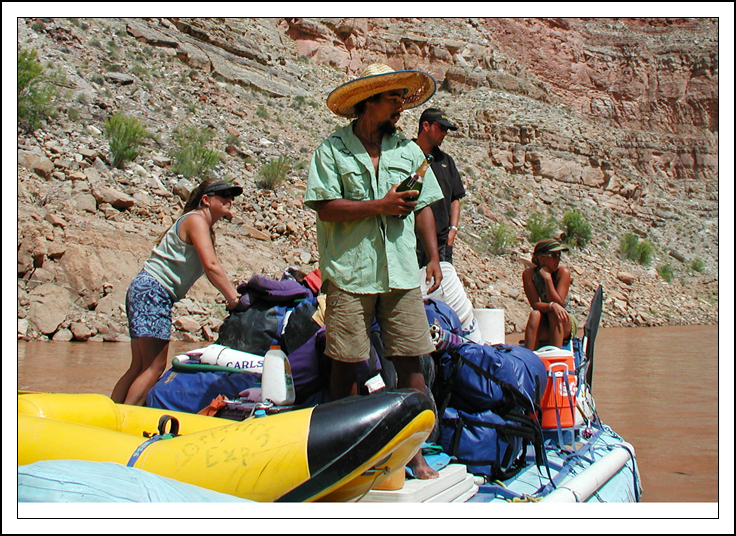 The next morning, we float silently to Clearwater Canyon. The crew unloads our bags off the J-Rig onto a muddy bank where a jet boat will pick us up and ferry us the last 20 miles to Lake Powell. The crew secures the oarboats to the J-Rig, Arlo pops open a bottle of champagne to celebrate the end of the journey, and, after some awkward goodbyes, the crew leaves us standing on the muddy shore feeling a bit forlorn.

With a pirate flag whipping near his head, Arlo pushes back the brim of his sombrero and blows kisses at us as the pontoon boat pulls away and heads back up river. On the far shore, a lone Great Blue heron stares hard at us, then gives a small shrill cry, lifts up off the bank, and follows the wake of the boat. Upriver. Away from civilization.

With all my heart, I want to go with that bird. With the crew.

An hour and fifteen minutes later, we are at Hite Marina where an air-conditioned mini-bus takes us from the river to a nearby airfield at the top of a butte. We fly low over the canyon and spot Arlo and crew heading back up the river. I watch them, my heart aching, until they disappear from sight.

Half an hour later, we are in Moab. The first thing I do is take a very long shower. But no matter how hard I scrub, I find it impossible to remove all traces of the red river soil staining my palms, my soles, and even my face. Afterwards, I go sit out by the hotel pool where Brian and the River Buddha, also freshly showered, are drinking gin and tonics.

I show the River Buddha my red palms.

“You can never wash away the river,” he says in his heavy German accent.

I believe with all my heart that the River Buddha is right.

The majesty of the river 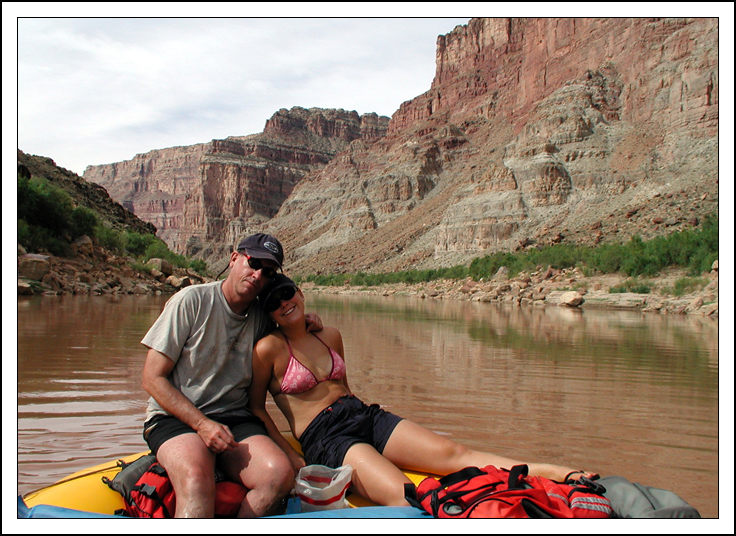 The author and his daughter after running Cataract Canyon. Photo by David Lansing.

This morning, over breakfast, Arlo broke down the day for us. “The river is low,” he said. “Which means the drops won’t be as big as they are in the spring. But it also means that some rocks and other things like trees that we usually don’t have to deal with could be a problem. So we’re going to run three or four miles of rapids and then we’re going to take a break and do some more scouting before we get to Mile Long Rapid.”

Mile Long Rapid is the stretch where the Powell expedition got into real trouble. This is the stretch where, to keep the crew’s spirits up, Powell often recited poetry and, as we push off into the coffee-and-cream colored river, Arlo reads another poem by cowboy-poet Vaughn Short:

They say the river can’t be run.

The water’s down—It can’t be done.

But if anyone can shoot it through,

So load on the Coors, lash it down!

Might as well be happy if we’re going to drown!

Roll up the bow line! Push out the boat!

With all this beer it may not float.

The boat jerks and dances as the river whirls us like children in the arms of a drunken uncle and no matter how good Arlo is—and he’s very good, threading the eye between two boulders only 12 or 15 feet apart, swinging wide, at the last moment, of a partially submerged tree trunk—no matter how good Arlo is, you feel like everything, really, is in the hands of the river. That she’s just toying with us. Not that she’s mean or vengeful. But powerful. The way ancient things can be powerful. Like the sea. And the mountains. Like Earth.

It makes me giddy, this ride down Cataract Canyon. I am not at all a religious man, yet it makes me feel somehow spiritual. Like I have submitted to a greater will.

In the afternoon, I give myself over completely to the river. I sit on the front of the boat with my daughter and we both let go of the chickie line. Instead of tensing up before hitting Big Drops and Little Niagara, we just let go. Like riding a wild horse. The nose of the boat rides up the lip of a rapid whose crown is high over our heads and the river drops us down, down, down, until we bob back up the other side, both of us happy and laughing. As if we’d just been reborn. Over and over, the river dips us in the water, washing us down, washing us down.

And then, just like that, it’s over. The river widens, slows, and we relax passing through a series of riffles that chatter against the bottom of our boat as we ease into Ten Cent Camp—our final campsite.

We have run Cataract Canyon. We have made it. 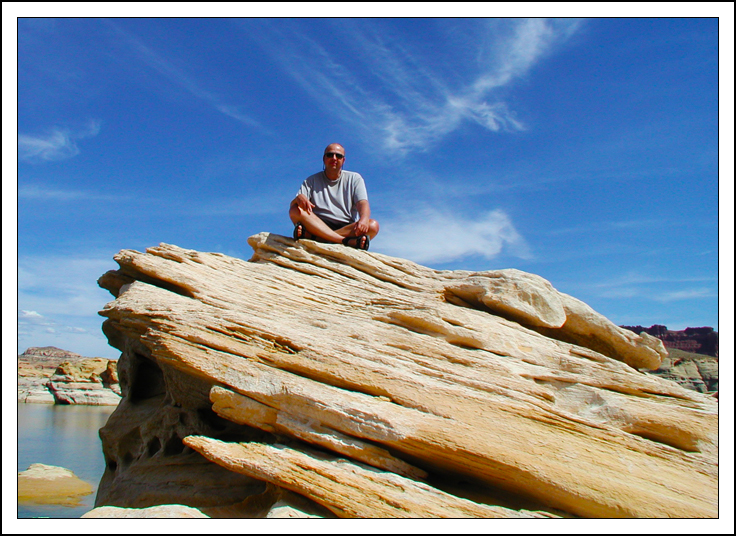 The next morning, the peeps join a few members of the crew for a hike into Cross and Y Canyons where we find a number of clam and snail fossils along with a trilobite—remnants of an ancient sea.

While everyone else is getting skinned up sliding up and down the limestone cliffs, the River Buddha sits alone, cross-legged, on a rock jutting out over the water. I watch him for awhile and then make my way down the path to join him.

“Listen,” he says. He closes his eyes and faces his palms towards the sky. The canyon is eerily silent. Cocking his head towards the river, the River Buddha says, “Silence is what makes the river speak.” 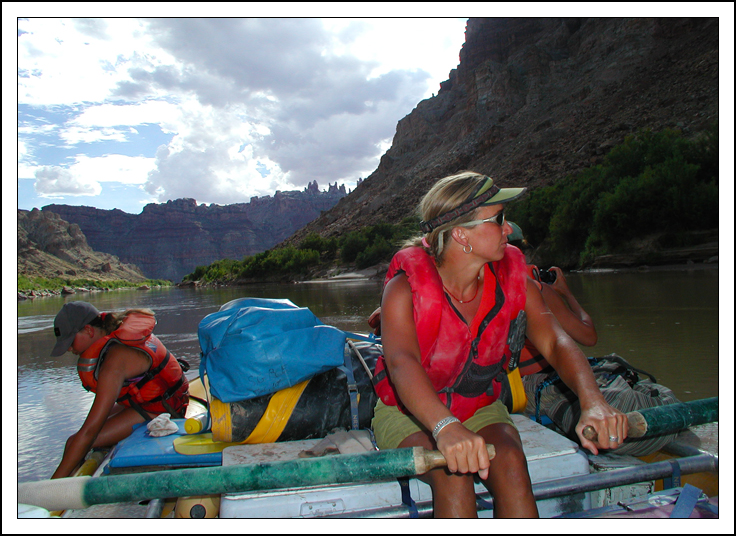 Midmorning the character of the river changes dramatically. The canyon narrows and the river bed is pinched between massive boulders that loom up in the frothing water like the backs of white elephants.

We have reached the riffles of Cataract Canyon. She—the River Buddha is right; the river definitely feels like an old woman at this point—chatters endlessly as the oarboats rhythmically dance up and down. Before reaching the first rapid—Brown Betty—we pull up on a sandbar and boulder hop along the shore, scouting what’s ahead.

Rapids are rated on a scale of I to X with the lowest rating indicating not much more than an easily negotiated riffle. According to Arlo, a Class VI rapid is pretty much unrunnable unless you’re as crazy as Powell. Of course, everything is relative. Brown Betty may be only a Class III rapid, but it’s named after the cook boat on the 1889 Brown-Stanton expedition that broke up and sank near here. And just down from Brown Betty, Powell himself found his lead boat, the Emma Dean, swamped, the crew thrown into the river, in a serious mishap that would have ended their expedition if there had been any way for them to get out of there except by river.

Brown Betty speeds the heartbeat and shortens the breath. I plant myself on the prow of our oarboat beside the River Buddha who looks quite serene. The nose of Paradise Lost rises up in the face of several feet of white water, then quickly drops, like falling off the edge of the world. Brian and my daughter, riding in the back and holding tightly to the chickie line, fly up in the air, like a reverse bungee jump. Arlo, his sombrero dancing on his head, grunts as he pulls hard on the oars to shift us away from one boulder and into the wash of another. In almost six miles of river, we run ten rapids, none bigger than a Class IV, before reaching a sandy beach near Y Canyon, our camp for the night. Everyone is breathless and sparkly and pumped full of adrenaline. After days of listless drifting, the river has brought us all to life.