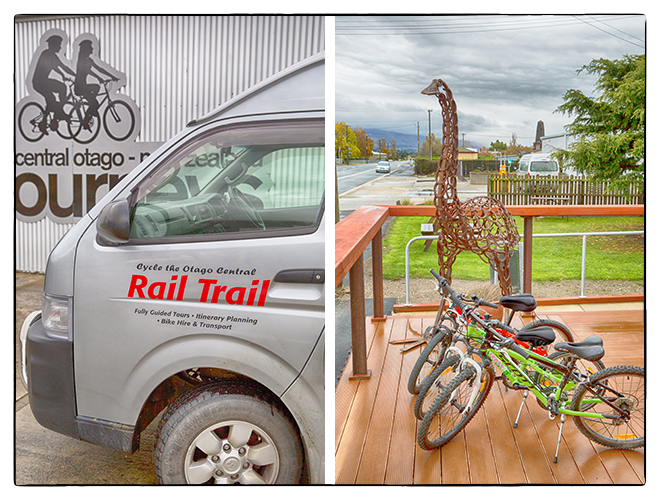 Neville (“Nev”) Grubb picks us up at the Pukerangi train stop. Nev is the co-founder and managing director of Trail Journeys, the biggest (and first) biking expedition company for the Central Otago Rail Trail, a 150km long bike path built across what used to be a railway line.

Nev is fit and bald and, with his arms crossed in front of him, looks more than a bit like Mr. Clean. He’s driving a silver van and instructs us all to hop in. I commandeer the front seat. It’s about 20km from Pukerangi to Middlemarch where we’re to be fitted for our bikes.

He’s referring to the torrential rain and the temp which, I’m guessing, is in the mid-40s. “Got some foul weather riding gear, I’m sure,” he says with a smile.

Actually, I don’t. When I left Los Angeles it was in the mid-80s and although I knew that May is late autumn in New Zealand, I couldn’t convince myself that I’d need serious winter gear for a bike ride. So I brought my fly-fishing pants, a lightweight jersey, and my cycling gloves. That’s it. Not even a rain jacket. When I tell this to Nev, laughing, he looks at me with concern.

“Supposed to be ten below zero in Wedderburn tonight,” he says.

Wedderburn is where we’re spending the night before starting our ride tomorrow.

When I don’t respond, Nev says, “And if it’s not snowing, it will be raining for sure.”

Driving through rural sheep country, Nev grabs his cell and makes a call. He tells whoever is on the other line that there’s a wool hat and gloves and a heavy rain parka in the trunk of his car. Can they get all that and bring it to Wedderburn in the morning?

When he hangs up, he smiles at me and says, “You’re all set. I’ve got some gear for you.” And then, after a pause, “Assuming they remember to bring it tomorrow morning.”

I hope so. If not it could be a chilly bike ride. 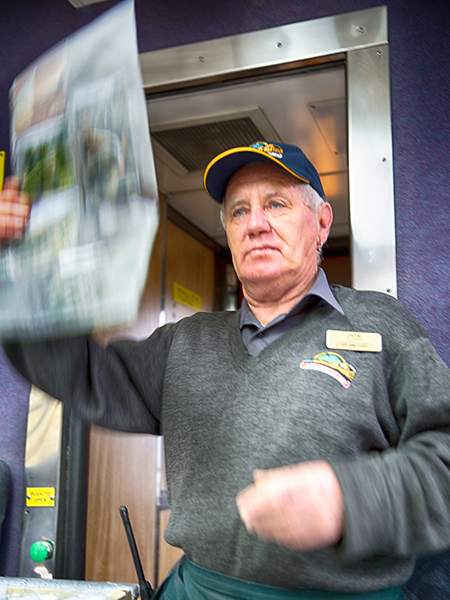 When I rolled my duffel bag out to the train platform in Dunedin a burly middle-aged man with sky-blue eyes intercepted me and took the bag from my hand, promising me he’d take care of it. He had a walkie-talkie jammed in to his rear pocket and a gold name badge pinned to his chest that said JOE. Not JOE SMITH or JOE JONES, just JOE.

Fifteen or twenty minutes after we departed, Joe showed up in our coach to ask for tickets. A few minutes later he was wheeling a cart down the aisle selling snacks and beverages and half an hour later he was back with a different cart selling souvenirs. Joe appeared out of nowhere to tell us to grab our cameras and go out on the observation deck so we could get a good shot of the Wingatui bridge that was coming up and later walked around answering people’s questions about the historic rail line. Joe, it seemed, was everywhere and did everything on the train. Hell, I wouldn’t be a bit surprised if, when he had a free minute, he also ran up to the front of the train to drive it.

A few hours later Joe announced we were arriving in Pukerangi and, would you believe it, when the baggage door was rolled back there was Joe, standing on the edge, ready to hand us our luggage. I guess if you’re going to work on the Taieri Gorge Railway you need to be a Joe-of-all-trades. 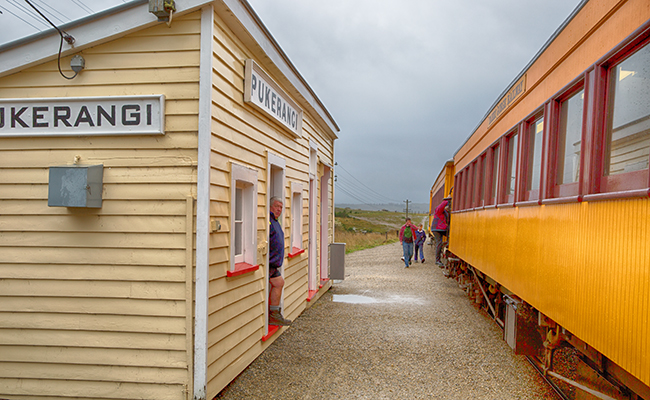 The depot at Pukerangi. There’s not much “there” there. Photo by David Lansing. 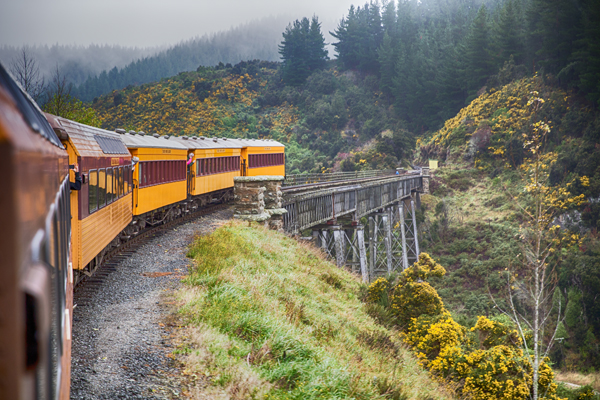 The Wingatui Viaduct bridge crosses over the Taieri River on the way to Pukerangi. Photo by David Lansing.

There are several families on the train to Pukerangi. A small boy, maybe seven or eight, quietly walks up the aisle between the seats, eyes bugging out, and, with an older sister, heads for the café car, bringing back a bag of chips and an L&P for his mom. L&P, a sweet soft drink that tastes a bit like a watered down lemonade, is to New Zealand what Coke is to America’s South. Everybody drinks it. It stands for Lemon & Paeroa, Paeroa being the place it was originally made.

The boy begs his mom to let him go outside and stand on the tiny platform between the two cars but she’ll have none of it. I don’t blame her. I’ve been out there and it’s treacherous, what with the wind and the rain and unexpected lurches left and right. I stood out there for maybe ten minutes and the whole time I had my lower body braced against the delicate railing, one hand on my camera the other on the railing.

It felt dangerous, in a way, but also delicious with the wind blowing through the trees which are in full fall bloom and the Taieri River muddy and swollen from several days of heavy rain, swelling the banks beneath us. My face red from the wind, my hands half frozen, I still had a hard time dragging myself back in to the warm coach. The misty light, the earthy smells of farmland, the sweeping views of the gorge outfitted in the oranges and yellows of the forests—I just didn’t want to leave it. 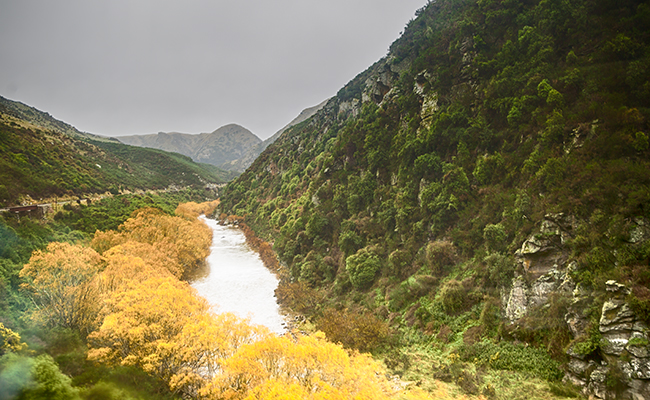 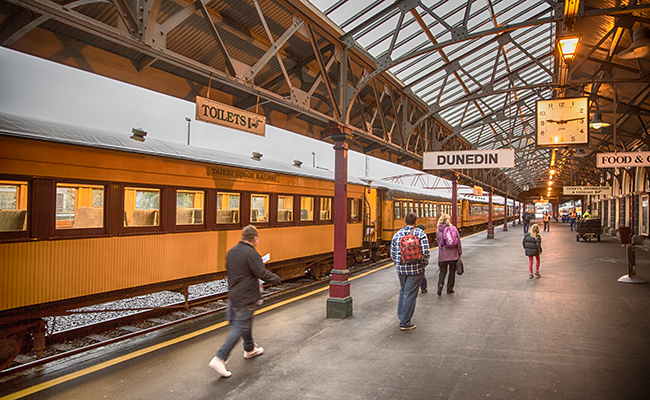 I’ve failed to mention why we are in Dunedin on the South Island of New Zealand. We are cycling. Six of us: Paul, an editor at Sierra magazine, Michael, a writer from Sonoma, Adriena, an En Zed ex-pat living in Los Angeles, and Justin and Casey, who sometimes live in San Diego and sometimes live in Paris (it’s a long story). And me.

Monday morning we got up early and said goodbye to Fletcher (both the dog and the lodge) and took a taxi to the Dunedin railway station, perhaps the most beautiful such station in all of New Zealand. We boarded our pumpkin-colored rail car, part of the historic Taieri George Railway, a little past nine and promptly at 9:30 chugged out of sleepy Dunedin headed for Pukerangi.

I liked Dunedin. I liked the quiet rainy streets built on hills, reminding me of San Francisco, and the bustle of uni students in all the cafes and pubs, and the somewhat rundown feel of the downtown area—like Portland’s Pearl District just before the stylish bars and gleaming lofts came in.

If Dunedin was a neighborhood in Los Angeles or Seattle or New York, you’d probably say it was on the cusp of gentrification. The Turkish kebab take-out joints are slowly being replaced by hip cafes and while there are still plenty of cheap digs for backpackers, there’s also the four-star Hotel St. Clair with luxurious rooms looking out over the gleaming waterfront.

Anyway, I was sorry to say goodbye to Dunedin. But it’s time to move on. To Pukerangi (Maori for “Hill of Heaven”) where we’ll be fitted for our bikes, and then on to Naseby which, since being founded as Hogburn during the gold rush of the 1860s, has changed its name four times in an effort to gain a little more respect. I don’t know about going with the name Naseby. I think they should have stuck with Hogburn. 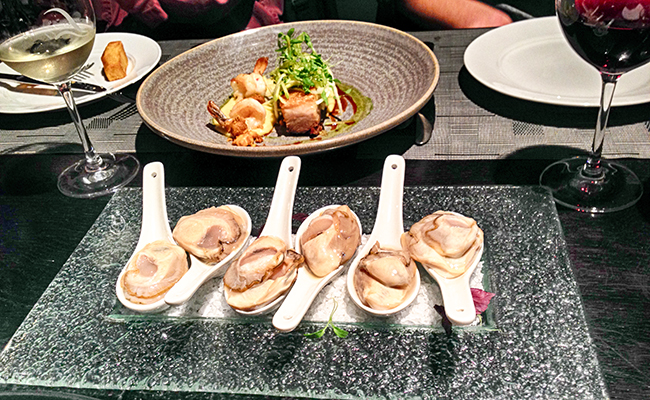 We’re sitting in the back of a Dunedin taxi on our way to dinner at the beachside restaurant Pier 24 in the Hotel St. Clair when Justin says, “You know what would really be perfect for dinner tonight? Bluff oysters.”

“Venison? Why the hell venison?”

“New Zealand venison is sweet as,” says Justin. Sometime during the last 24 hours Justin has started to talk like a Kiwi. Everything from the long black he had at breakfast to some craft beer he had in a pub this afternoon is “sweet as.”

When we get to Pier 24, Hamish and Annie are waiting for us. “What would you like to drink?” Hamish asks us.

“Well…” I stammer and before I can say anything else, Hamish says, “Because Annie and I were thinking an Otago sparkling wine would be nice.”

“Sweet as!” says Justin, holding up his index finger. We’ve got the bubbles part of our wish list. Now there’s just the oysters and venison.

When the waiter comes to take our order, Justin says, “You don’t have any Bluff oysters, do you?”

Before the waiter answers, let me tell you a little bit about Bluff oysters: They’re the best in the world. They’re plump, juicy and have the consistency of raw clams. Even people who don’t normally like oysters tend to like Bluff oysters. They come from the southern-most point of the South Island where they are so famous that the area holds an annual festival every year in May to celebrate them. Food stalls turn them in to oyster pies and oyster stew, batter them, fry them, barbecue them, and, of course, serve them raw. In short, Bluff oysters are sweet as.

Anyway, the waiter tells Justin they did have Bluff oysters on the brunch menu but, unfortunately, they’re all out. And then, as an afterthought, he adds, “Although we may have one or two dozen still in the back.”

“We’ll take all that you have,” Justin says. “Immediately.”

And not five minutes later, out comes two plates of Bluff oysters, a dozen raw and another dozen in a tempura batter.

“Bluff oysters and sparking wine,” I mumble. “It doesn’t get any better.”

“Except…” I say, looking over the main courses on the menu, “did you see the third entrée item?”

Justin laughs. “What? How is this even possible? Venison? They have venison at a seafood restaurant?”

“The triple crown,” I say. “Champagne, Bluff oysters, and venison.”

And it is. But it is also wonderful.