A fight for lions 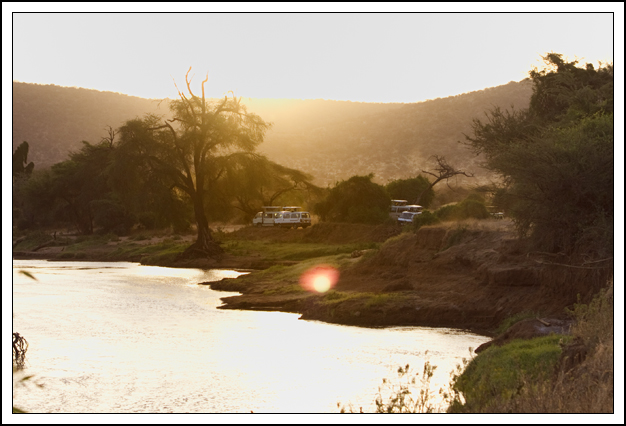 A view of the Ewaso Ngiro with clustered minivans fighting to view the lions. Photos by David Lansing.

We were driving along the banks of the Ewaso Ngiro River very late in the afternoon. The sun had already fallen behind the hills and the air was suffused with a golden duskiness that put an ethereal sheen on the water so that it looked like a river of gold. A troop of baboons marched across the far bank, the totos riding on their mother’s backs. Several egrets stood in the shallows just yards away from the raised heads of crocodiles.

We had maybe half an hour of light left before it would be too dark to see anything but Simeon was on a mission. He’d heard from another guide that a pair of lions was roaming along the riverbanks somewhere around here and he was trying to find them. At a point that stretched out into the river where it made a sharp right turn, he stopped the Toyota and got out the binoculars, scanning the banks downriver. 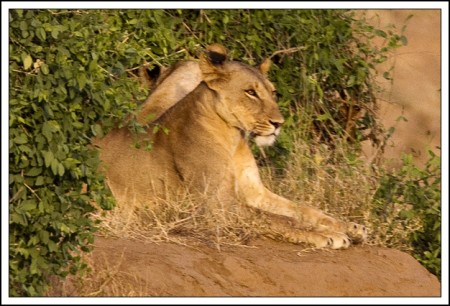 Lions along the Ewaso Ngiro. Photo by David Lansing.

“Lion,” he said. “Two of them.” They were sitting in brush on a raw bank of the river that had been eroded during the flood in March, serenely gazing out on the scene before them. They didn’t look to be hunting. Just catching the last rays of the sun and enjoying the passing of the river.

Simeon gunned the Toyota and we hurried over the rutted river road, the vehicle bouncing and jostling us about as he sped through potholes and over rocks. About fifty yards short of where we’d seen the lions we came to a Y in the road. Coming up one part of the Y towards us was a white mini-van with five or six tourists in it. They’d also either seen or heard about the lion sighting. Simeon floored the Toyota, trying to cut off the mini-van before we both reached the point where the two roads merged into one, but the other driver was quicker and pulled ahead of us.

Within minutes there were two, then three, then four other game lodge mini-vans, all headed for the same destination. By the time we got to where the road ended at the river’s edge, there were six different vehicles all pushed up against each other, heads sticking out of open roofs, cameras clicking away. Simeon tried to maneuver the Toyota off-road so that we might have an unimpeded view of the lions, but every time he shifted position, one or two of the other vehicles did as well. Everyone was trying to get in the front of the pack, as close to the lions as possible. It was ridiculous. It felt like we were all a pack of hyenas, snapping and nipping at each other. Here we’d made a special trip to come to Samburu because Pete was afraid that the Masai Mara would be touristy and full of mini-vans and it hadn’t been the Mara where we had freeway jams of mini-vans but in Samburu.

We told Simeon to forget about jostling with the other vehicles and to move on. We backed out from the river and drove further down the road to a high point that looked back at where we’d been. The two lions, annoyed by all the activity, had left their restful perch over the river and were slowly ambling along the banks upriver, away from the vehicles. We stayed just long enough for Pete to shoot some photos of the beautiful golden river at sunset and the clusterfuck of vehicles gathered along the banks.

It made me realize how fortunate we’d been on this trip. We’d traveled from the Tanzania border almost all the way to Lake Turkana and this was the first time we’d been out game viewing where we actually had to hassle with other mini-vans and tourists. Everywhere else we’d been, from Cottars 1920s Safari Camp to Sarara to Lake Paradise, we’d practically had the place to ourselves. We’d been spoiled. But it just goes to show you that when you come to Africa, you need to due your research. Or you’ll end up fighting a dozen mini-vans to get a look at a couple of lions. And that takes all the pleasure out of the experience.