Drinking wine while speaking of frogs 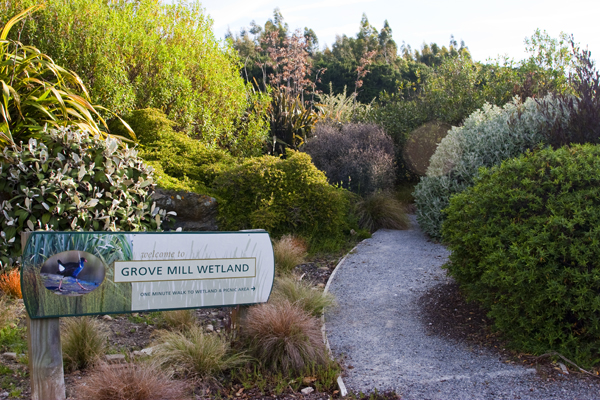 The trail to the wetlands picnic area at Grove Mill Winery. Photo by David Lansing.

An epic day yesterday. After tasting something like 36 wines at six different Marlborough wineries I ended up the afternoon at Grove Mill, the first winery in the world to achieve CarbonNZero certification. Which basically means that they are so friggin’ green that their operations have zero impact on carbon dioxide emissions from energy (and that includes the distribution of its wine). Roger Kerrison, the guy at Grove Mill largely responsible for this accomplishment, offered to take me around and show me what they did to be such good citizens of the planet, but after having spent two weeks visiting maybe 40 wineries around here, I told him I pretty much felt like I’d been there, done that (how many times can you listen to a spiel on the fermentation process?).

Which, I think, was fine with Roger. So since it was such a gorgeous afternoon, with those famous long white clouds gliding high over the Waihopai Valley, Roger rounded up Grove Mill’s young winemaker, David Pearce (I’m just starting to realize that almost all the men in New Zealand are named David for some reason; not that I mind. I think it’s a lovely name), and the three of us tromped off to the picnic grounds in the middle of the winery’s restored wetlands with Roger hauling six bottles of wine in something that looked like what milkmen once used to deliver bottles of milk to your home when that still happened, and David carrying a few more bottles in his hands. 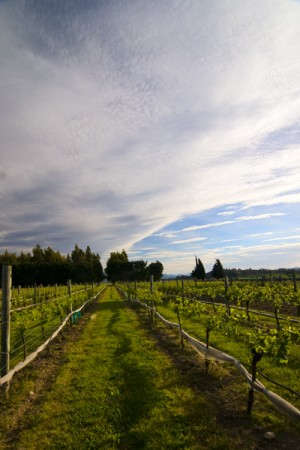 We sat on the grass and talked about trout fishing (David is a keen fisherman) and how Roger, who is from the UK, ended up working in a New Zealand winery. Long story short: Roger came over from England five years ago for a friend’s wedding and ended up buying so many great Marlborough wines that he basically spent his airfare home. “Truth is, I got stuck here,” he said.

No matter. He loved it here so all he needed to do was figure out what how his IT background might fit in at a winery. “Rob hired me (that would be Rob White, the winery’s CEO) to figure out how large our carbon footprint was and then come up with ways to get us down to carbon neutral.”

We tasted Grove Mill’s Sauvignon Blanc, the world’s first carbon zero certified wine, which David proclaimed had a certain “salt marsh characteristic to it” (I think this was the wine talking), as well as the Pinot Gris and the Riesling and…well, we sampled all of them. And we stopped talking about how minerally they were or whether there was a little fig taste in the Chardonnay (I swore there was) and instead took off our shoes and lay on our backs on the cool grass and talked about fly-fishing, cooking (David Pearce collects cookbooks), the Southern Bell frogs that were croaking all around us in the wetlands, and the best live concerts of all time (I just don’t understand when people bring up the Grateful Dead).

In other words, we drank some good wine and just enjoyed ourselves. Until the pale blue sky started to turn orange and purple, the shadows grew long, and it was time for me to walk (thankfully) down the road to my B&B.

As I said: An epic day. Tomorrow it’s on to New Zealand’s North Island.