Getting rid of Snipes

I didn’t mention it yesterday but there was a reason why we stopped in Granger. It’s the gateway to Snipes Mountain.

When Tia and Alicia told me they were taking me up Snipes Mountain to look at vineyards my first reaction was, Yeah, right.

A snipe, if you don’t know, is an odd little wading bird that is so difficult to hunt that it gives its name to the term “sniper.” And a snipe hunt is nothing more than a practical joke where you talk some dummy into going out into the woods with a gunny sack or something and have them run around in circles while making some ridiculous noise until they finally realize there are no snipes in the woods and they’re all alone.

So I was sure this is what Tia and Alicia were doing: Taking Dave on a snipe hunt and leaving me there. But I guess people around Granger haven’t heard of snipe hunts because there really is a Snipes Mountain. Although calling this modest-size hill (which tops out at 1,310 feet) a mountain is kind of ridiculous. I’ve seen bigger sand dunes.

Anyway, there are only two things of interest about Snipes Mountain. The first is its geology. The soil is littered with car-sized boulders of granite, which is interesting since there’s no granite in the Yakima Valley. Obviously the granite was delivered either by aliens in their space ships or from hitching a ride on melting glaciers (which is also probably how the bones of that wooly mammoth they found in the clay pit arrived) during the last ice age. I’m guessing it was the aliens that brought them. 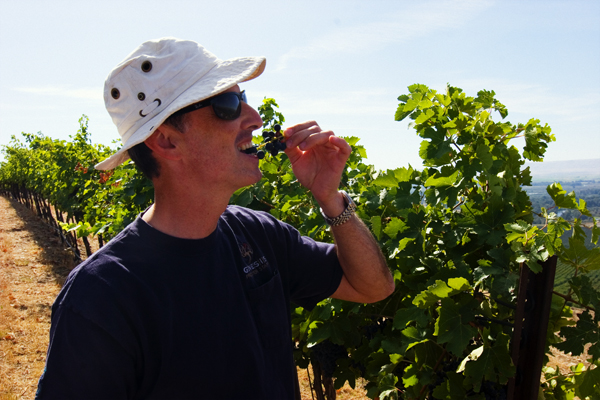 The other thing of interest about Snipes Mountain is that in February of this year, it became an official Washington American Viticultural Area (AVA), the state’s 10th. This is interesting because there are only about 665 acres of vineyards planted on this hill. Which isn’t much. But Tia and Alicia wanted me to see it. So we drove up the dirt road, getting a nice view of the Yakima Valley, to the flat top where the Roskamp family lives in a wind-buffeted ranch house surrounded by the vineyards that grow grapes for Hogue Cellars.

I don’t know how anybody could live up there. It’s isolated and Tia says sometimes the wind blows so hard that it just rips out chunks of the house. Nice.

Now I’m telling you all this because I think it’s just crazy that there’s an AVA a few minutes outside of Granger named Snipes Mountain. It’s just wrong. And I want to help change that. So from now on, I’m going to do the logical thing and call it Dinosaur Hills and I want you to call it Dinosaur Hills as well. There may never have been any real dinosaurs in this area but there definitely weren’t any snipes either and at least people can go see big ol’ plastic dinosaurs when they pull off the highway on their way to Dinosaur Hills to taste a nice glass of merlot.

I mean ask yourself if you’d rather visit a winery on Snipes Mountain or Dinosaur Hills. Obviously Dinosaur Hills. And if Hogue Cellars was smart, they’d order a 20-foot wide pterodactyl and put it way up high, with its wings open, in the middle of the Roskamp vineyard. I’m guessing that would keep the birds away from the fruit.