Istanbul: A city of opposites 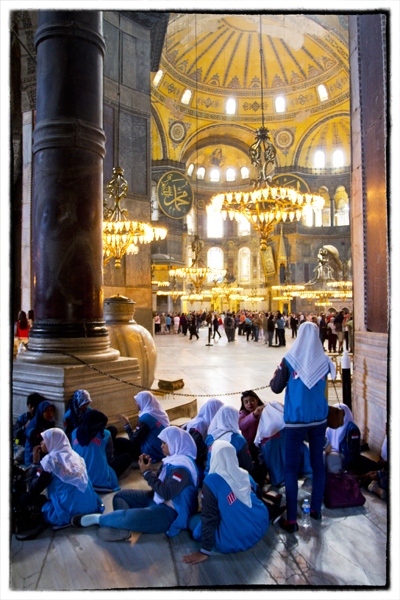 A group of Muslim school girls sit in the shadows at Hagia Sophia. Photo by David Lansing.

I woke up early this morning ruminating on a conversation I had at dinner last night with Sidar’s Romanian friend, Delia. Delia, who is 32, and her friend Gemina are film makers. Delia asked me at dinner if I knew what I was going to write about Istanbul and I told her the truth: I didn’t have a clue.

I explained to her that, for me, I need to feel something emotional about a place before the story comes to me. It’s not just about going and looking. Something visceral needs to happen. Almost like getting your religion.

And then we made small talk about the day and the things we had seen and enjoyed, in particular, about our visit to Hagia Sophia, and I realized that we had had very different reactions to this beautiful place. We talked about how we felt looking up at the cherubim on the dome and Delia said this had made her feel hopeful because, for her, it showed the tolerance between the Christian and Muslim cultures.

I had just the opposite reaction. It made me think of the tens of thousands of people that have died because of those icons in the church/mosque and as I was walking around the Hagia Sophia the single word that kept cropping up in my mind was “intolerance.”

So—hope or hopelessness; tolerance or intolerance; light or dark.

And I guess, for me, this is what Istanbul is all about. It’s a city of opposites; it is Asia and it is Europe; it is the beginning of one thing and the end of another; it is the future and it is the past.

And so you go to the Hagia Sophia and look up at the domed ceiling and see four images in the corners, one of which has been restored to show a stern angel’s face looking down on you and the others which are still covered up by Islamic medallions. Light or dark? Tolerance or intolerance? This is what I’m thinking about this morning.