In the morning I went down to the restaurant on the ground floor of the Saratoga for breakfast and ran into Pedro. He was sharing a pot of coffee with a Salma Hayek-lookalike wearing a straw fedora. Her name was Natalie and she introduced herself as a French Tahitian gypsy who had just gotten into Havana last night.

Pedro, of course, had never mentioned her. The story, as Fletcher later told it to me, was that Natalie lived in Sayulita, Mexico, a New Age-y surf town an hour north of Puerto Vallarta, where she and her sister own a clothing and jewelry store called Pachamama (according to Wikipedia, Pachamama is revered by the indigenous people of the Andes as a fertility goddess).

Obviously I was curious as to what she was doing in Havana. Fletch said that a couple of days ago she’d flipped a coin: Heads she’d get on a plane the next day and meet up with Pedro in Havana, tails she wouldn’t. Obviously it had come up heads (or maybe she’d gone two out of three or, if that failed, three out of five). So here she was. 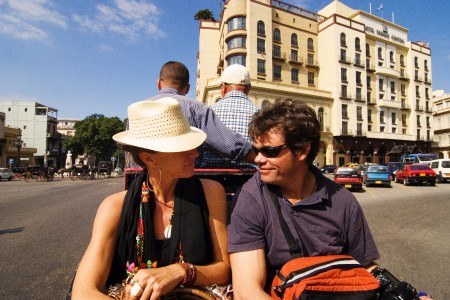 I thought Natalie’s sudden appearance might complicate our plan to hire a couple of horse-drawn carriages and ride out to Vedado to watch the rumba dancing at Conjunto Folklórico. But Pedro still planned on taking us (he’d been a few years earlier) and Natalie seemed agreeable enough to the idea.

The rumba dancing was fascinating. It was an like being invited to an eye-popping neighborhood party full of jineteros and barely-dressed young women, bouncing and swaying to the live guaguancó music, a sort of passionate  rumba where a man struts his stuff around a hot young woman, trying to “vaccinate” her by touching her hip or ass with his hand or foot while she lures him on, only to brush him off in disgust at the last moment in an effort to prevent the vacunao. Call it Latin courtship. 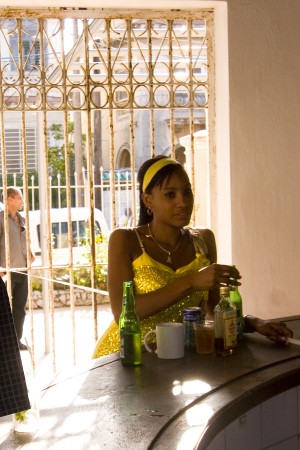 Pretty in yellow and waiting to rumba at Conjunto Folklorico.

While Pedro and I were shooting all this, Natalie was hanging out in the back of the crowd where she soon had to fend off a stream of local admirers, all trying a little vacunao of their own on her. One guy, obviously smitten, came up to me while I was shooting and asked if the beautiful woman wearing the fedora was mine. I laughed and told him no. “She is more beautiful than any woman in Cuba,” he said sadly. I told him I thought he was wrong; there were many beautiful women in Cuba. “Not like her,” he said.

Every guy that came up to her wanted to dance, of course, but she politely demurred. As a consolation prize, they all asked her for a kiss, which she allowed. I think they were just as happy with that. 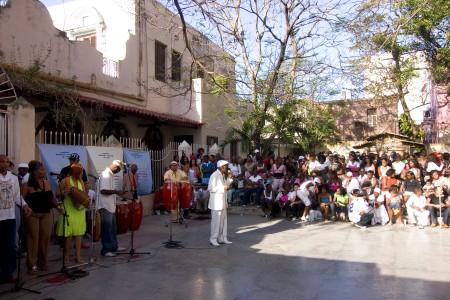 The crowd at Conjunto Folklorico in Vedado.

After the guaguancó there were some initiates, dressed from head to toe in white, performing santería dances. As I started to take some photos an old woman came up to me and wagged a finger in my face.

“Respecto, respecto,” she said sternly. Evidently it’s bad form to take photos of the initiates. Later I asked the guy who had approached me earlier about it and he told me that not everyone likes having the santería dancers here. “They do it to show its influence on Cuban music and dance but many think it’s disrespectful.”

The afternoon was getting late so we decided to head back into Havana. We walked a few blocks to one of the main drags but there weren’t many taxis in this neighborhood. Eventually we were able to flag down one and half our group piled into that. When we weren’t able to spot another taxi after five or ten minutes, Pedro suggested we hitchhike. “Someone will pick us up,” he said. 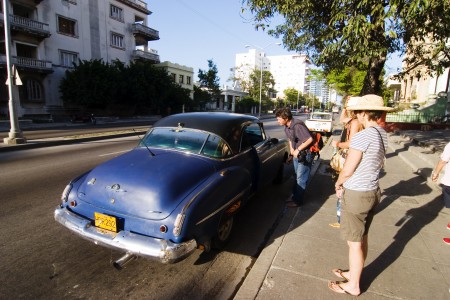 Pedro flags down an old car to take us back to the hotel.

And he was right. Not two minutes later an old Pontiac pulled up and offered to take us back to the Saratoga. Pedro climbed in front with the driver and his friend and I got in the back with the girls. This might be the only large city in the world where I wouldn’t think twice about jumping into a beat-up 50 year old car with strangers and let them to take me and a couple of good-looking women to a hotel. But when you’re traveling with an exotic French Tahitian gypsy willing to come to Havana on a flip of the coin, anything seems possible.