Of cowboys and Federales

The other day I was getting all righteous about how you can knock back a Negra Modelo or two while hanging at the beach in front of Don Pedro’s in Sayulita. And it’s true. But then there’s the other side of Mexico which is less thrilling—the heavy-handed police and military presence. I mean, you’re kicking back on the beach, waiting for the tamale lady to come by, checking out the surf and all of a sudden a couple of military guys come strolling by carrying some serious firepower. 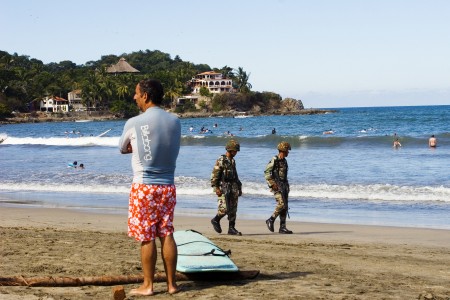 It seems kind of ridiculous. I mean, what are they looking for? Do they think drug runners are slipping stuff in and out of the beach on their surfboards? And if some serious drug lord did show up out of the blue carrying 50 pounds of coke in his backpack, what are these guys going to do? Start shooting up the beach?

But you look at this photo and the dichotomy of Mexico comes into full focus—soldiers strolling along the beach like lovers just in front of a middle-aged surfer. 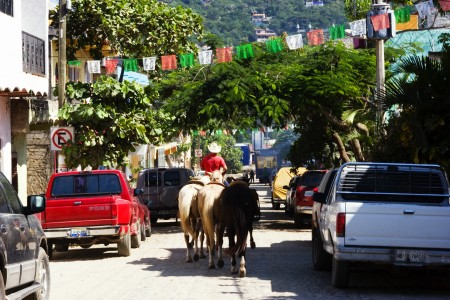 And then you walk across the plaza, making sure you don’t get nailed by a teenager zooming his motorbike or ATV down the narrow street, and you look up and…there’s a cowboy riding his horse into the sunset.

So strange, so evocative. And only in Mexico.