There are many great bars in Havana. My favorite is Bar Monserrate, a block up from the Floridita. At the Bar Monserrate you can order a queso y jamon pizza for less than $2.50 and get a beer for about a buck. There are also as many Cubans at the Monserrate as there are tourists, which you can’t say about the Floridita.

Saturday I spent the day wandering around Habana Vieja, hanging around the Plaza de la Catedral and then meeting up with friends late in the afternoon at the Monserrate. There was a hot band playing, led by good-looking guy in a red blazer and white fedora. 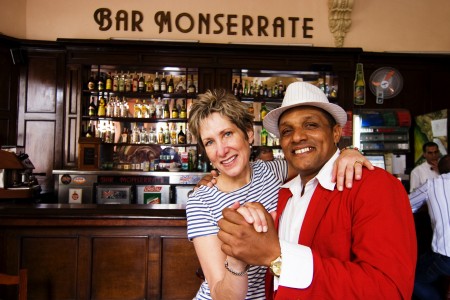 William Valoy and a fan at Bar Monserrate

This was William Valoy, a respected Cuban sonero. You can’t walk a block in Havana without coming across a live band, maybe playing in a bar like Monserrate or in a restaurant or even on a street corner. Sooner or later, no matter whether the band is made up of two people or seven, like Valoy’s band, Septeto Sabor, you’re going to hear the classic Buena Vista Social Club song Chan Chan.

There’s something very nostalgic and dignified about the song, making you think that it’s an old Cuban classic, but, according to Ry Cooder, it’s actually a relatively recent composition by famed trova guitarist Compay Segundo (trova is the old country-style Cuban music that originated on the Eastern end of the island, near Santiago, where a balladeer writes and sings his own music—sort of like a Cuban Bob Dylan). 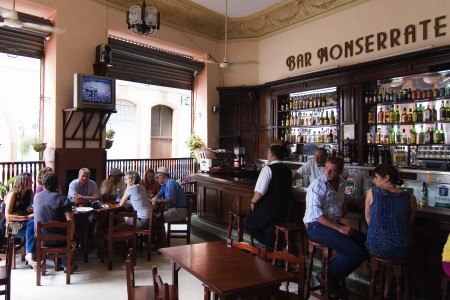 I didn’t know this at the time, but there’s a link between Compay Segundo and William Valoy who has done some back-up vocals with Segundo. Another vocalist in the band was Felix Valoy. That’s a famous name in the Cuban music scene. Felix Valoy (also spelled Baloy), like Segundo, is an old-time arranger and famed sonero (son being the slow country music that produced trova and eventually led to salsa and rumba). But the original Felix Valoy is in his sixties so I’m guessing that the Felix Valoy playing in this band is maybe his grandson. And is he related to the band’s leader, William Valoy? God only knows.

It’s all a little confusing. Just like Cuban music itself. I mean, what’s the difference between son and salsa? Ask three people and you’ll get three different answers. Here’s what I say: Salsa is the sexy, sensuous sister to the older, more austere son. And the difference between salsa and mambo? They’re the same thing. Although Tito Puente, known as the Mambo King, once famously proclaimed, “The only salsa I know comes from a bottle.”

Whatever. Watch this video of William Valoy and his Septeto Sabor band at the Bar Monserrate and, whether it’s the salsa or mambo, you’re going to want to dance.


Bar Monserrate in Havana, Cuba from David Lansing on Vimeo.