Searching for minotaurs by bike 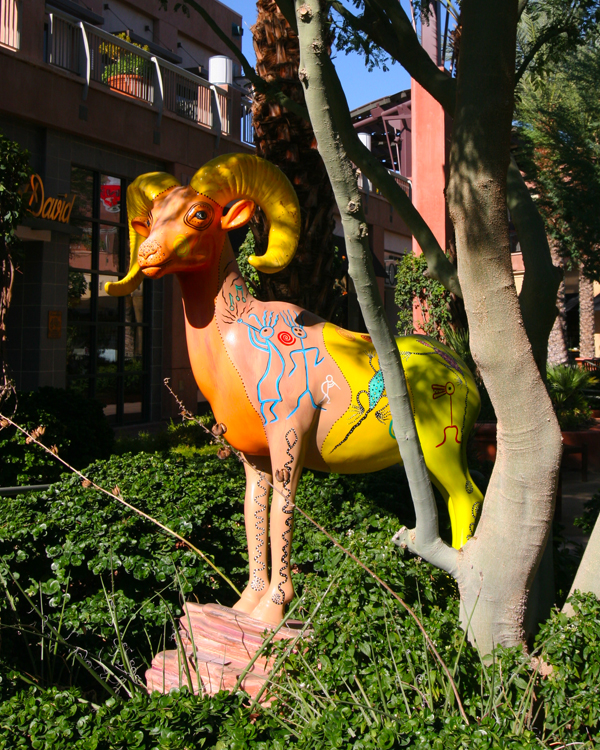 This morning I walked over to a bike shop that’s a couple of blocks from The Mod Resort. Laura had told me that they rent bikes and I thought it might be cool to tool around on a road bike if they had one that was big enough for me. Which they did. Ryan at Funseekers! (yes, with an exclamation point) not only rented me a very cool hybrid for the day but gave me a bike trail map and suggested a couple of Funseeking! routes.

Just to get the feel of the bike, I headed up El Paseo, the main drag through Palm Desert. You know, it’s always interesting to see a place while biking instead of driving. It looks completely different. For some reason, despite the fact that I’ve gone up and down El Paseo half a dozen times this week, it wasn’t until I was on my bike that I realized there was so much public art around here. 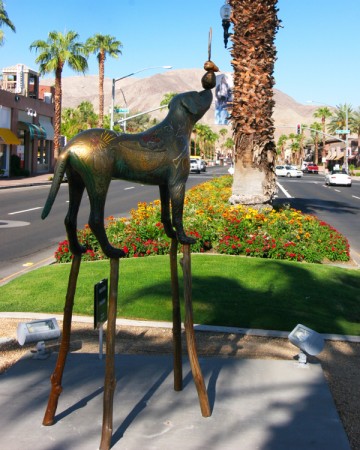 A dog on stilts in the middle of El Paseo; Brad Rude's "Trick Ride."

It’s like I’m just pedaling along and—Oh, hey! Look! There’s a bighorn sheep! Not a real one, of course, but a very colorful one peeking out from the shade of an acacia tree. And a minotaur holding a hare…and a dog balancing a horseshoe on its nose…and a 15-foot-high apple red dragonfly!

In fact, there’s got to be at least two dozen startling pieces of public art in and around the El Paseo shopping district, all part of the city’s massive Art in Public Places Program which they’ve been doing since 1986 (basically, if you’re going to develop in Palm Desert, you need to put up a piece of art). What a great concept. And seeing it by bike was perfect. A horse, a hare, and a coyote; Sophie Ryder's "A Conversation."