Stories from my grandmothers 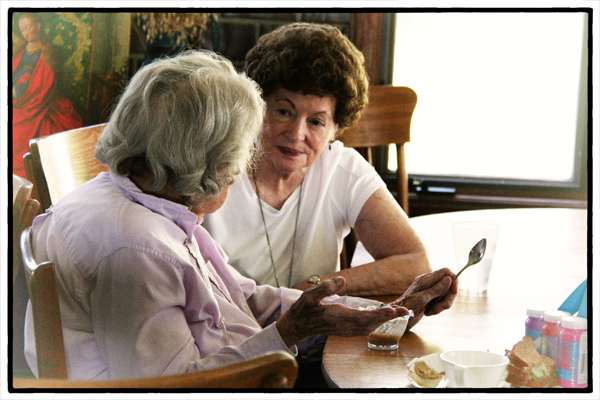 The grandmothers. Photo by Katie Botkin.

A Letter from Katie Botkin in Iowa:

Grandma, my mother’s mom, and Grandmother, my father’s mom, are talking at the table. Grandmother is telling stories of Europe after the war. She went over on a steamer with her mother and her father, who worked with the president’s farm bureau at the time. Her father was interested in what was going on agriculturally in the countries that were just coming out of the war.

“He wore a nice hat, and a nice overcoat, and he looked prosperous. When he told them his credentials, they treated him like a senator or something. When we were in Berlin — I think it was Berlin — Berlin was nothing but a pile of bricks — they gave us our own rail car. It was all done in red velvet,” says Grandmother.

Meanwhile, she had made friends with people on the steamer ship to Europe, and managed to find a job with the American Embassy in Paris. So she ended up staying in Paris for a few years.

“You were very brave to do that, so young,” says Grandma.

“It didn’t occur to me to be afraid,” says Grandmother. She talks about one of her colleagues at the Embassy, a girl who had been living in England. “She said she was always hungry. When she heard there were jobs in Paris, she said, I’m going to get one, so that I can eat,” says Grandmother. “She learned French in something like three weeks so she could take the test to work there. She was very determined and very bright.”