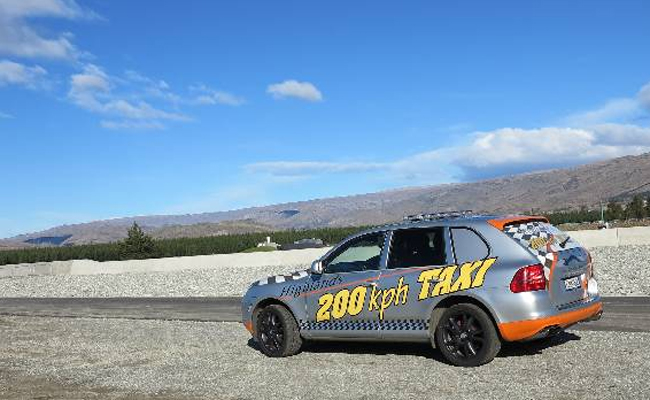 There are car guys and then there’s me. I know nothing about cars. Not even the ones I own. My car has four doors and a pretty good radio and never seems to break down. That’s about all I can tell you about it.

So when Adriena told us we were going to stop off at the Highlands Motorsport Park in Cromwell to have a look at the cars in their museum and maybe take a spin in one of their high-powered vehicles—well, let’s just say I was the wrong audience. But, you know, when you’re with a group, you sometimes just have to go with the flow.

About this motorsport park: It’s like a Formula One track for amateurs. A 4.5km circuit full of hairpin turns, blah, blah, blah. I’m sure if you’re in to that sort of thing, you’d want to know all about it. But all I was wondering is when we were going to have lunch.

So we walk around the auto museum where, I’m sure, they had some neat cars, although I couldn’t tell you what they were, and then we all got to give their little go-kart track a spin, and finally they handed us serious race car helmets and took me and Michael and Paul for a ride in what they call their Highlands Taxi. Sounds innocuous enough, right? Except this “taxi” is a Porsche Cayenne Turbo (I only know that because I wrote it down) driven by a 19-year-old going 200kph.

Sound like fun? It wasn’t. To be honest, I thought I was going to throw up. And 200kph (about 120mph) isn’t all that fast in the race world. But I don’t think I’ve ever been in a car going over 80mph. And this one is being driven by a kid. Who keeps being asked questions by Michael, who was sitting up front. Michael wants to know if the car can roll (sure), if they’ve ever had an accident (not yet), and what would happen if a tire blew (let’s not talk about it).

Finally, I tell Michael to please stop asking the kid questions and just let him drive the damn car. Which he does. For maybe another five or six minutes. Which seemed like the longest five minutes of my life.

When we finally stopped, Justin and Casey were standing there smiling, waiting to go next. Casey, like me, is not a big car fan and hates things that go fast. So she was hesitant about even doing this. But she trusts me. “How was it?” she asked before getting in.

“It goes pretty fast,” I told her. And I wasn’t lying.

When she got out of the car at the end of her ride, the first thing she did was walk up to me and punch me in the arm. Hard. I suppose I deserved that.