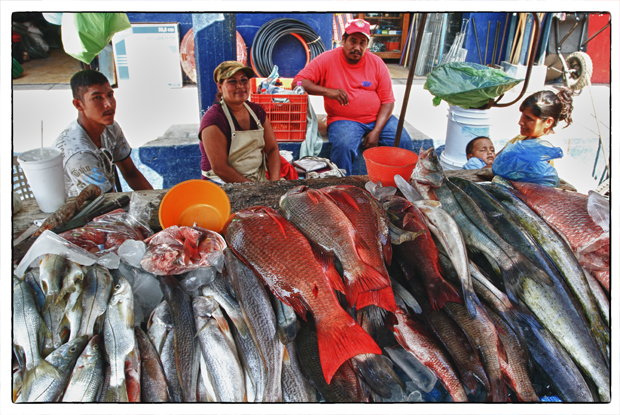 This morning Chris, Pete, and I got up a little after six. We were going fishing. The day before, Chris had arranged with Diego, a fisherman who lives at the bottom of the hill in Plantanitos, to take us out in his panga. The dorado are running but to get to where they are you have to go far out to the islands, and if you ever saw Diego’s small outboard motor, which he covers in a dirty old T-shirt, you’d think twice about going an hour or more offshore in his boat. Instead, we would just fish along the coastal reefs where the local fisherman go.

So just before seven, we were all loaded up with rods and reels and tackle boxes along with some water and snacks for the morning, but when we got to the gate, the guard told us that Diego had come up earlier in the morning to let us know there would be no fishing. The winds, which had been blowing for the last couple of days, were making the surf too big and he was afraid his panga would get swamped pushing off from the beach.

This was too bad. I had really been looking forward to going out in Diego’s panga and doing some fishing. You get out in the deep blue water where the dolphins break the surface all around you and the water is so clear you can look down and see the large schools of jack crevalle or toro swimming beneath you and you tend to forget that you have a house in Bucerias that has some major plumbing and electrical problems.

Well, I said as we drove back to the house, perhaps we can go out tomorrow. Tomorrow, Chris said, we were planning on going to La Tovara in San Blas to look at the birds and the crocodiles. We can go fishing on Saturday.

Which is a bit of a conundrum for me since I was planning on heading back to Bucerias this afternoon after fishing. I would like to go fishing Saturday but I do not want to go to San Blas and it seems silly to sit around the Fletcher’s house tomorrow while they are all doing the jungle cruise in San Blas. So now I will have to decide whether to drive home tomorrow and see what sort of new horrors await me in Bucerias or stay here for a couple more days.