Last night I asked the concierge at the Locanda Della Posta for a restaurant recommendation within walking distance of the hotel and he went on and on about a little osteria called Il Gufo—The Owl.

Small, not fancy, but molto, molto buon, he said. Then he shrugged. “But you no can find,” he said.

Show me on a map, I told him. He took out a map and circled an area the size of Manhattan. “Here,” he said.

What street is it on? I asked.

So I went off in search of Il Gufo, having only a rough idea of where to search. But how hard could it be? I’d just go down one vicolo after another until I found it. 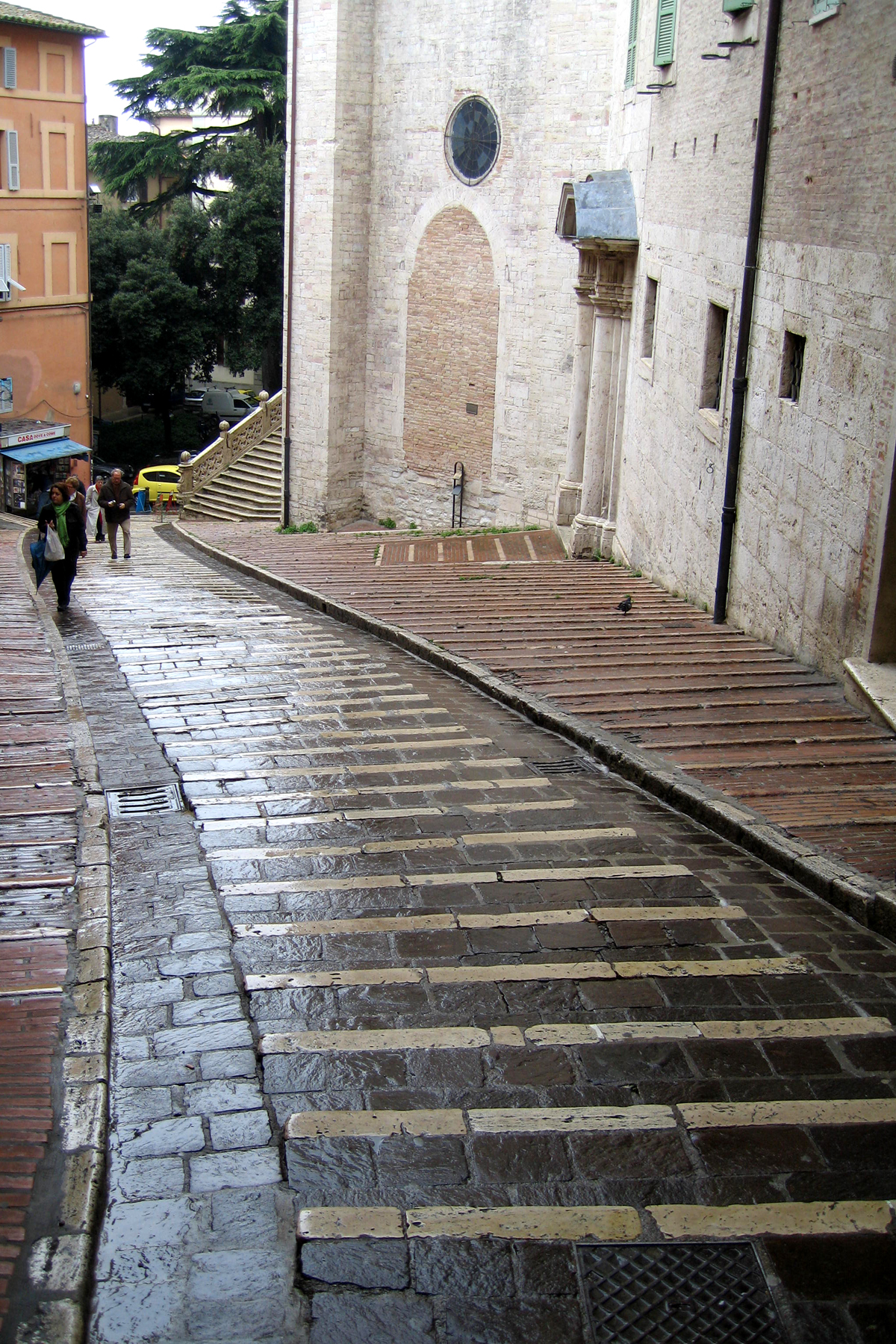 The vicolo leading to Il Gufo. Photo by David Lansing.

Which is what all those Gauls and Goths and Lombards who invaded this city over the years must have thought when they pulled out their swords and started running down some narrow cobblestone street after a fleeing local only to eventually find themselves very lost and with no idea how to find their way back. That’s why they made these streets narrow and winding to begin with. So people would get lost.

After searching for Il Gufo for well over an hour, I finally gave up. But, of course, now I had no idea how to get back to Corso Vannucci. So I just wandered around. Getting more lost. Trying not to worry about it. Eventually I stopped into a little restaurant and asked a young woman setting up tables for directions to the center of town. I told her I’d spent the last hour looking for a restaurant called Osteria Il Gufo.

By getting lost, I’d found it.

The hostess, who happened to be the wife of the chef, Luca, took me to a table in the back. It was quiet in the restaurant—just a few young couples on dates and a neighborhood family or two. The chairs were mismatched, the restaurant was garishly lit, and the worn tables were covered with paper placemats. A young girl came by and gave me a menu which had been handwritten in almost-unreadable script and then Xeroxed to make it even more difficult to read.

I went with the specials, starting off with housemade tubes of pasta, maccheroncini, dressed in a light ragu of Norcina pork with a shaving of pecorino on top, along with a good glass of Montefalco sangratino. So simple, so extraordinary.

The chef, Luca, brought out my main course: a slow-cooked stew of braised wild boar with fennel. Without a doubt the best meal I’d had in Perugia. When I told this to my waitress, she smiled. “Simple but good, eh?”

As I ate my meal, the restaurant slowly began to fill with customers. Everyone who came in the door made a point of stopping by the open kitchen to exchange greetings with Luca and his wife. This was obviously a family place, a neighborhood joint.

I ordered an espresso for dessert but when my waitress came back, she also brought me a chocolate mousse. “Luca says to try,” she said. The mousse, made with dark Perugina chocolate, was plump and moist and shaped like a mango seed. It was so sensual that I ended up just taking small little spoonfuls and letting it melt on my tongue. Like snowflakes.

This might become my favorite restaurant in Perugia. If I could ever find it again.