How to make a Flintlocke cocktail

Yesterday I got an email from a reader, Mike McClure, telling me about a cocktail I’d never heard of called The Flintlocke. I asked Mike if I could post his letter (and attached recipe) and he said, “Please do! It would be great to see the Flintlocke make a comeback!” So here it is. The original recipe (as well as Mike’s adaptations) follows.

I really enjoyed your ‘I’ll Take Manhattan’ magazine article from several years back; and have shared it with many of my friends. (as well as the link to your web site: “My Father’s Thanksgiving Manhattan”)

If you ever wonder if your articles connect with your readers; I’d like to share with you the following.

I enjoyed the article for two reasons:

·        The second reason is the nostalgic tie to your father.  In our family, we have a similar story.

For our family, the drink is called the Flintlocke.  Legend has it that back in the 1960′s; a bartender at the Colonial Inn in Concord Massachusetts entered and won a national drink contest sponsored by Laird’s (Maker of Apple Jack and Early Times bourbon).   His drink was the Flintlocke.  It’s similar to a Manhattan: (Bourbon, Apple Jack but also includes Crème de Cacao, lemon juice and Grenadine) Proportions have to be accurate or it will taste like bad cough syrup or worse.  For the next couple of decades, the Inn featured the drink.

In the late sixties, my father, while dining there, spotted a ‘table-tent’ card on the table featuring this drink.  He enjoyed the drink and brought home the card.

Over the next few years, he perfected the mixing of the drink.  I remember when my parents were having cocktail parties, Dad would make up a batch and share the recipe with their friends. (Think Christopher Walken in the opening scene of “Blast from the Past”) At future get-togethers, the friends would all compare notes with him on their own mastery of the drink.

As my siblings and I reached the drinking age (I’m now 59), we carried on the tradition and have shared this with our friends and extended families.  In the mid-eighties, one friend made a trip back to the Colonial Inn; only to find the drink still being featured…with the same table-tent placard.

Sometime in the ’90s, the restaurant stopped featuring the drink.  In 2011, my wife and I made a trip  back to New England and the Inn.  In making our hotel & dinner reservation, I spoke to Dave the restaurant manager and asked if they still had the drink.  He said ‘Yes.’  I then shared with him this story of my dad and that table-tent card.  Dave asked if I still had that card; and he admitted that none of his current bartenders really knew how to master the drink and the old-time patrons have been complaining.  So I sent him a photocopy of the card as well as my notes/tips on how to make it (see attached).  While we were at the Inn, one of bartenders (John) made a pretty good one. (Of course, not as good as my dad’s.)

Like you, this has become our holiday seasonal drink of choice.  As the family gathers at Thanksgiving and Christmas, we always make up a batch of Flintlockes; and continue to share the recipe.

Our father passed away in December, 2000.  In his final days, the family gathered around his bed.  We had one more Flintlocke with him while eating his favorite Christmas cookies (Old fashion German Sand Tarts).  To this day, we sacrilegiously referred to it as “the body and blood of our Father”; Amen.

So, again, thank you for your article.  Glad to know other folks have similar traditions and memories of their parents. A Hurricane at Pat O’Brien’s 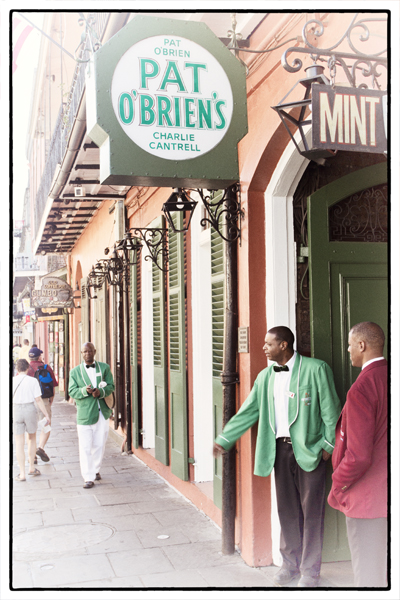 I was flipping through a slick New Orleans magazine in my hotel room when, in a typical “What to do in New Orleans?” story, I came across this rather amazing statistic: “A Times-Picayune survey reported that 95 percent of all first-time tourist to New Orleans go to Pat O’Brien’s.”

Well, I’m a first-time tourist in New Orleans and I’d hate to drag down the 95 percentile, so I decided to search out Pat O’Brien’s which, according to the story I’d read, is the bar that invented the ‘Hurricane’ cocktail. Only problem was, I’d never heard of a Hurricane cocktail. But I was guessing that, like most drinks given strange tiki or tropical names, it had something to do with rum and sickly-sweet fruit juices. Which it did.

Pat O’Brien’s, which opened its doors on Dec. 3, 1933, just before the repeal of Prohibition, started out as a speakeasy with the password, “Storm’s brewin’.” In 1942, it moved to its present location at 718 St. Peter Street. Pat O’Brien was a bootlegger in Louisiana and Mississippi who, so the story goes, passed through New Orleans, got stuck there, and opened a small package liquor store/speakeasy. He was a retail dealer and his eventual partner, Charlie Cantrell (whose name you see on the bottom of the Pat O’Brien’s sign), was a wholesaler. They had met on Louisiana’s Bootleg Highway during Prohibition.

The way the bar tells the story, during WWII there was a real shortage of bourbon and scotch, and the whiskey companies sent “missionary men” out with regular salesmen and coerced bar owners into buying large quantities of the harder-to-unload rum in outrageous amounts. Sometimes the bar owners would have to agree to take 40 or 50 cases of rum in order to get the bourbon and scotch they wanted.

“Four ounces of the booze nobody wanted, through trial and error, made its way into a glass shaped like a hurricane lamp with lemon juice, passion fruit syrup, and crushed ice—and became the most famous drink in the most famous bar in New Orleans.”

It’s not yet noon and there’s hardly anyone at the bar. Nonetheless, what few tourists there are are all drinking Hurricanes. So I order one as well. And here’s what I can say about the drink that 95 percent of all first-time tourists drink in New Orleans: It is the worst cocktail I’ve ever had.

How to make a scratch sour mix 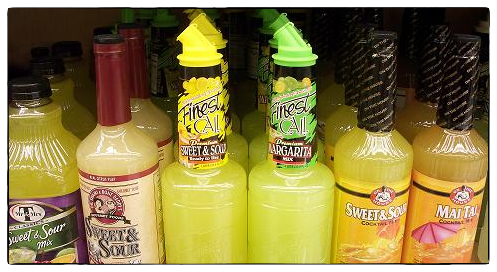 Yesterday I wrote about how Mexican Controy is now being distributed in the U.S. by a little company in Texas called Pura Vida. I also mentioned a story I’d written a few years ago on how to make The Best Damn Margarita Ever. The keys to that cocktail were using a 100% agave tequila, Mexican Controy, and a homemade sour mix.

Thinking about all this kept me up last night. Getting a really good tequila is obvious and now you know how to get ahold of Mexican Controy. But I didn’t really say anything about the sour mix which is just as important as the spirits.

First of all, if you’ve got a bottle of commercially made sweet and sour mix in your refrigerator, I want you to do the following: Go to fridge. Pick up bottle. Unscrew cap. Pour down drain. Throw bottle away.

Never ever ever insult yourself or your guests by using one of those funky sweet and sour mixes no matter how much they cost (do those colors look natural to you?). There is just no comparison to making your own. And it’s not that hard. First you need to make some simple syrup. This should take you all of about 3 minutes. Simply add 2 cups of sugar and 1 cup of water to a pot and gently heat until all the sugar is dissolved. No need to boil. After it cools, pour the syrup into a clean bottle. (Bar trick: after you pour it into the bottle, add an ounce of vodka to the simple syrup to prevent mold or bacteria from growing.)

Now, to make your homemade sour mix, all you’re going to do is use equal parts freshly-squeezed citrus juice and simple syrup. The easiest thing to do is use equal parts lemon and lime juice. For instance, to make a liter of sour mix you’d combine 8 ounces lime juice, 8 ounces lemon juice, and 16 ounces simple syrup. But you can use other combinations as well. For instance, I typically use a little grapefruit juice when making a sour mix for margaritas. Maybe 4 ounces of grapefruit juice, 4 ounces lemon juice, and 8 ounces lime juice. Sometimes I’ll use blood orange juice as well. Give it a try. You’ll find whatever combination of citrus juices you use will be a lot better tasting than anything you can buy at the store.

Controy finally gets a green card 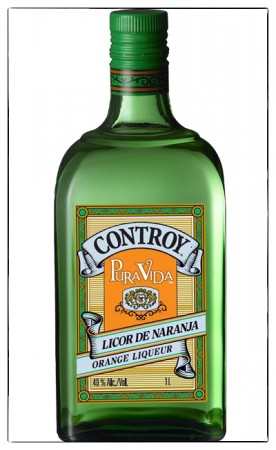 A few years back I wrote a guest blog on The Best Damn Margarita Ever for The Foodinista (which is written by Heather John, a former food/cocktail/fashion writer for the sadly missed Los Angeles Times Magazine and then Bon Appétit). I stressed in my story that there were three key ingredients to making a really, really good margarita: use a 100% agave tequila (I always use a reposado, but blanco is fine as well); make your own sweet and sour mix from fresh-squeezed Mexican limes; and use Controy, not Cointreau or Grand Marnier.

As Heather and a few other readers pointed out, the only problem with my recipe is that the only place you can get Controy is Mexico. Which is why I always buy a couple of bottles to bring home when I’m down there.

But last week I got a startling email from Chris Novostad, of Pura Vida, a small Texas-based company, who’d read my story about The Best Damn Margarita Ever and wanted to let me know that Controy—which, since its creation in 1933 has never been allowed in the states by the giant conglomerate Remy Cointreau—would now be distributed by Pura Vida in the U.S.

As Chris wrote, “Controy finally got its greencard.”

For now, it’s only available in Arizona, California, Colorado, Lousiana, Nevada, New Mexico, and Texas. But they’ll soon be expanding, both in other states and internationally.

I can’t tell you how happy this makes me. In fact, I think I’ll make myself a Controy-based margarita to celebrate. 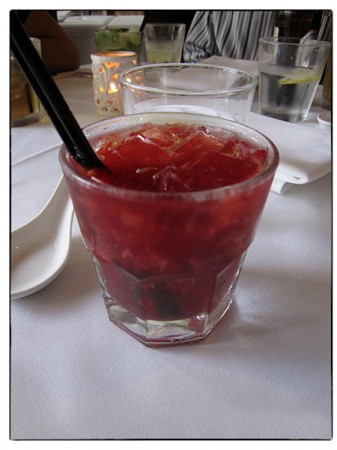 The Turks put pomegranate juice in everything—including this wonderful cocktail I discovered at a swank little bar in Bodrum. It’s called a pomegranate caprioska, a caprioska being something like a vodka daiquiri (limes, simple syrup, and booze over crushed ice). I like this version which adds a couple of tablespoons of pomegranate juice to the mix. It’s also a prettier version than the original. And perfect for summer.

Place all but one of the lime wedges in a cocktail shaker with the vodka, pomegranate juice, and simple syrup. Muddle the ingredients, then add crushed ice and shake well.