You are currently browsing the monthly archive for September 2013.

About 25 years ago, the King of Thailand’s mum (known as the Princess Mother) decided to build a summer retreat on the top of Doi Tung mountain in the far north of Thailand. There was a reason she chose Doi Tung; Thailand was trying to convince the local hill tribes to stop growing opium poppies but they really didn’t have a lot of other choices. So the Princess Mum thought, maybe if I have a royal house here and try and help the people, they will stop growing opium flowers.

Mum got very involved. She set up schools, clinics, and encouraged funding of new crops to replace the opium growing. It took awhile, but these days the hill tribes are known for their macadamia nuts and coffee (neither of which is indigenous to Thailand). In fact, Doi Tung coffee is now so well known that it’s now sold all over Thailand.

This afternoon we made our way up the steep, winding mountain road during a magnificent downpour to visit the Royal Villa at Doi Tung (the Princess Mother died in 1995 at the age of 94). While we waited for the rain to ease up, we had coffee at the Café Doi Tung.

If you ask a Thai if Doi Tung is the best coffee in Thailand, they’re likely to tell you it is number one. And then if you ask them if Doi Chaang, another famous brand, is as good, they’ll say, “Doi Chaang number one.” In fact, you’ll probably get the same replay about any Thai coffee.

“This is excellent coffee,” I said to Ketsara as we sipped our coffee watching the rain come down.

“I think it’s the best coffee I’ve ever had.”

“Maybe the best. Maybe some other.” She said she could think of a couple of other coffees that were as good. I asked her if we were going to be in the areas where those coffees were sold. She thought about it for a minute and then said, “Ye-s-s-s-s-s.” Which means maybe. What it really means is, It wasn’t on the itinerary but let me see if I can make it happen.

The rain let up. I paid the bill and bought a bag of just-roasted Doi Tung coffee beans. I told Ketsara that I would also buy Thai coffee beans at the other places and when I got home I would sample all of them and tell her which was the best. I did this to insure that she would find the other coffee stores.

“Maybe not just one best,” she said as we headed up the hill to the Princess Mother’s summer retreat. “Maybe all good.”

Maybe. We shall see. 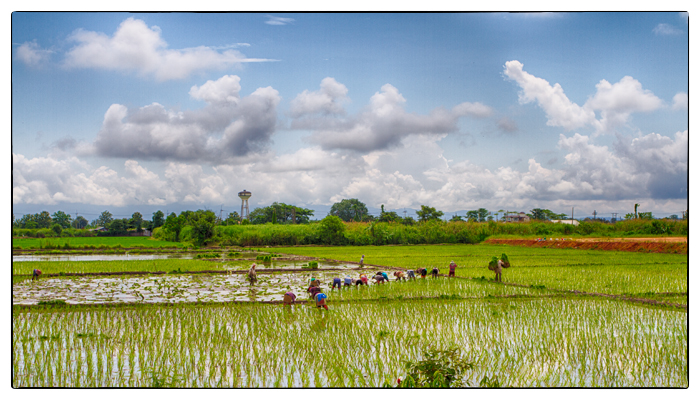 Before I came on this trip I asked my daughter, who has spent some time in Thailand, what I needed to know. “Be prepared to be overwhelmed by rice,” she somewhat cryptically wrote back.

I think I now know what she meant. Rice is ubiquitous in Thailand. It’s part of almost every meal, of course, but it also shows up in their art, their music, their festivals, and even in their religion.

There is a particular Buddha image—a standing Buddha with both arms pointing to the earth—that is particularly popular here in Northern Thailand. It is known as the “Calling for Rains” Buddha because the rice crop is so dependent on rain.

The rice goddess must be honored before cultivation if the crop is to be bountiful. The rice grain contains a spirit (kwan) and is planted in the rainy season to become “pregnant.” The Thai word for irrigation (chon prathan) translates as “gift of water.”

It is the rainy season here in Thailand. Every day it rains. Sometimes for 20 minutes, sometimes for two hours. We drive through the countryside and see mile after mile of rice paddies. And in the paddies are the workers, transplanting seedlings in row after row as the rain comes down. All part of a cycle that has gone on here for thousands of years. 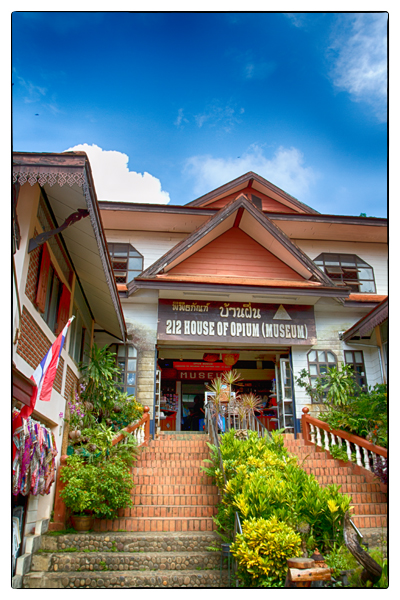 The House of Opium in Chiang Saen, Thailand. Photos by David Lansing.

Unbeknownst to me, Ketsara evidently decided last night that we were not going to the opium museum in Chiang Saen today.

Ketsara doesn’t say anything. I think she’s protecting me. I think she’s worried about the effect certain dark things on this trip might have on me. It’s true I’ve been a little moody lately. But what does she think is going to happen at the opium museum? Certainly they’re not giving away free samples, are they?

In the end, she relents. “Quick stop,” she says. “Fifteen minutes.” 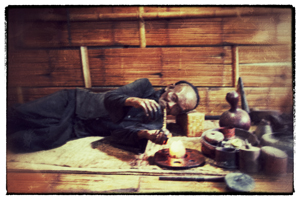 Diorama of an opium den. Photo by David Lansing.

The museum is dark—literally and figuratively. In small rooms they house hundreds of opium pipes, many charred and thick with old opium paste, porcelain jars for storing the drug, and the elaborate scales used to measure the opium. But what I find particularly spooky are the dioramas of opium dens, some so realistic looking that it takes you a moment to realize that the drugged out Chinaman lying on his side lighting an opium pipe isn’t real…is he?

I walk briskly through the museum. Ketsara was right, I really don’t need to see this. Or at least, I don’t need to linger. After about ten minutes of wandering around, I am dying for some fresh air. And light. 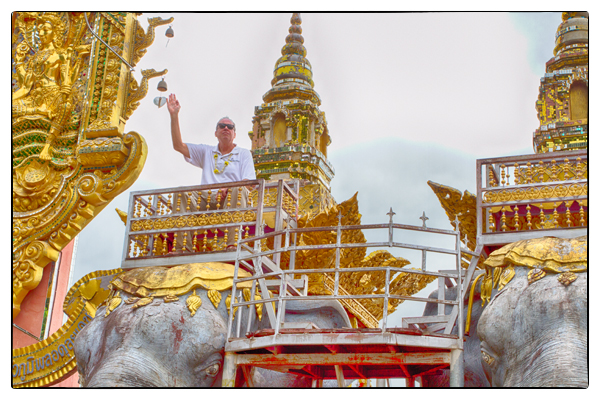 Perched atop a faux elephant in Chiang Saen, searching for my sanuk.

These last few days I have not been myself (or maybe I have been myself; remember that Khun Ketsara, in revealing the dark side of my Buddha nature, said that I do not know nearly as much about myself as I think I do). My mood has been as dark and heavy as the monsoon sky.

This morning as we were walking around Chiang Saen, trying to make sense of this oddly empty Buddha theme park along the banks of the Mekong River with its faux dragons and faux temples and faux elephants, Ketsara asked me what had happened to my sanuk.

Sanuk is the Thai word for happiness or pleasure. But that is just the half of it. Sanuk is a central part of Thai life. In Thai culture, you find sanuk in all of life. Daa sanuk means to enjoy giving someone a hard time; thuuk daa sanuk is to be the person to whom someone is giving a hard time and enjoying it.

If you’re someone who just likes to talk it’s called khui sanuk; if you like to work it’s thamngan sanuk. The concept of sanuk goes way beyond just enjoying a good laugh or having fun at a party; in Thailand, sanuk is almost like a form of religion (and, really, sanuk is part of Buddhism—finding the enjoyment in all of life, the good and the bad).

So when Ketsara asked me what had happened to my sanuk, I knew what she meant. I’d lost my mojo.

But I had a solution. I handed her my camera and told her to take my picture. “Where?” she said. I told her to just watch me.

I jogged over to a pair of 20-foot-high bejeweled tin elephants and climbed up the rickety stairs to the top, climbing in to a golden basket perched atop one of the faux pachyderms. I sat down and looking down at the plaza that was empty except for Ketsara standing there holding my camera, began a royal wave, as I imagined the queen did it, to my single loyal subject. I waved and smiled and Ketsara, giggling, took my photo.

My sanuk was back. 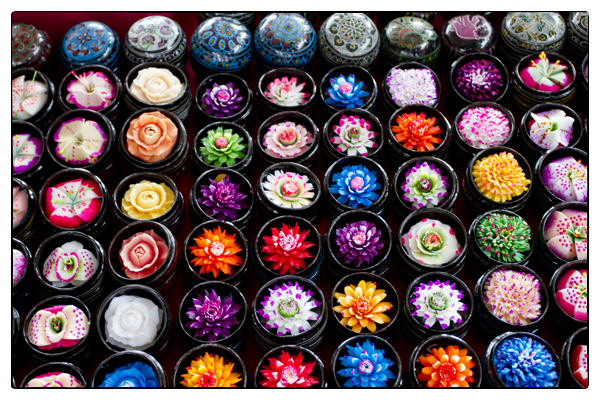 A selection of soap flowers in the market at Chiang Saen, Thailand. Photo by David Lansing.

When our longtail boat got back to Chiang Saen, I went for a walk in the village. There were a number of stalls along the river selling the usual tourist crap. But there were no tourists. Most of the vendors had abandoned their stalls and were instead sitting in the shade of a café along the Mekong drinking tea.

One of the vacant stalls had hundreds of hand-carved soap flowers. You can find soap flowers all over Thailand these days but they say the carving originated in the villages around Chiang Rai. It’s one of those odd little tourist trinkets—like wildly-painted geckos in Mexico or soapstone elephants in Kenya—that makes you wonder, Who was the first person to do this? Who was the Thai guy (or, more likely, gal) who, with nothing better to do, sat down and used an exacto knife to carve a round piece of soap into the shape of a jasmine flower or a blooming lotus?

And then, how did others learn how to do it? I could sit and watch a guy carving soap bars in to flowers all day long and still not have a clue as to how to do it myself. When that first Thai made a soap flower, it must have been precious. And then they made a few more and sold them to passing tourists for a dollar or two and thought, Hey, maybe we can make a living doing this. And now every tourist area in Thailand from Phuket to Chiang Rai has guys selling soap flowers.

I took a few photos and then the stand’s owner came over from the tea shop and tried hard to sell me a soap flower. They cost about $5 each and come in little round wooden boxes hand painted with flowers and elephants and such. I didn’t want one. But I was still feeling depressed from the boat trip up the Mekong and bad about all these vendors with no customers. So I bought a very delicate soap flower, a jasmine soap with just a few petals instead of some of the more intricate, overwrought designs.

I don’t know what I’ll do with it. Maybe I’ll give it to Ketsara. Or hand it to a monk. As part of my education in dana parami, generosity.