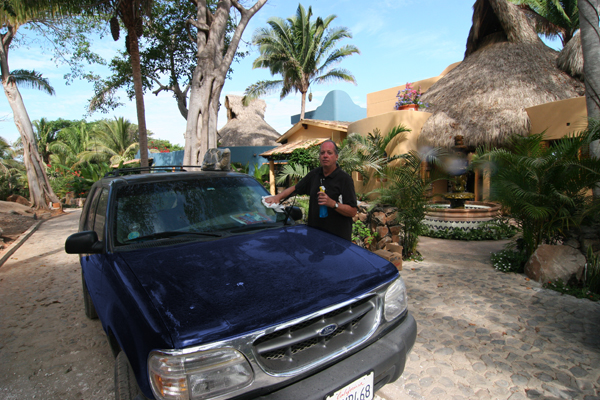 The Blue Whale in front of Casa Corona del Mar.

I’d mentioned that by the time I got to Custodio on Saturday the brakes on my car were gone which is a problem since the nearest mechanic was about half an hour away. Chris said the guys at the front gate were pretty mechanically minded and might be able to fix it if it was something minor. I didn’t think it was minor. But we walked up to the house at the gate and talked to Ismael, the property manager for the complex, and he promised to have someone take a look at the car.

Later Sunday afternoon, Ismael came back to the Fletcher’s house with the car key. He said it was fixed. Chris and I shot each other a look. It didn’t seem possible that someone could have fixed the brakes in a couple of hours. Chris asked Ismael what the problem had been and he said the car was out of brake fluid. So they had poured some in. And that was that.

“¿Estás seguro de que era el problema?” I asked Ismael. Yes, he said. That was all. No brake fluid. After Ismael had left, Chris and I talked about it. I told him I knew it was more than just low brake fluid. That wouldn’t explain why the brakes were locking up or pulling to one side or the other. Chris suggested we go have a look at it, so we walked back up to the gate where the Blue Whale was resting in the shade. Chris crawled underneath the engine and I started it up and pumped on the brakes. Chris started hollering. “Turn it off! Turn it off!” He was making so much noise I thought maybe his arm had gotten caught in the fan belt or something.

When he pulled himself out from under the car, he was covered in brake fluid. As soon as I’d stepped on the brakes it had started pouring out, he said. So we went back to Ismael’s house. He wasn’t there but someone else was and we brought him out and showed him the lake of dark fluid on the soil beneath the car. “No es fijo,” Chris told him. The man nodded. He said they would have to get a mechanic to come up from Zacualpan and he would charge $20 just for the visit. I told him that was fine and to please arrange it as soon as possible.

The mechanic came on Monday and it was announced that once again the Blue Whale had been fixed. I didn’t believe it. I got in the car and started it up and pressed on the brakes and although fluid no longer rushed out to the ground, they were soft and almost reached the floorboard. I had planned on going back to Bucerias Monday morning but Chris and I talked about it and agreed that it would be foolish to drive through the jungle with no brakes so it was decided that since they were leaving on Wednesday, I would just stay over and we could convoy back into town together.

“Or you could just stay here,” Chris said, “and be Marta’s helper in the kitchen.”

Which didn’t seem like such a bad idea. Maybe I’d finally learn how to make really good tortillas.