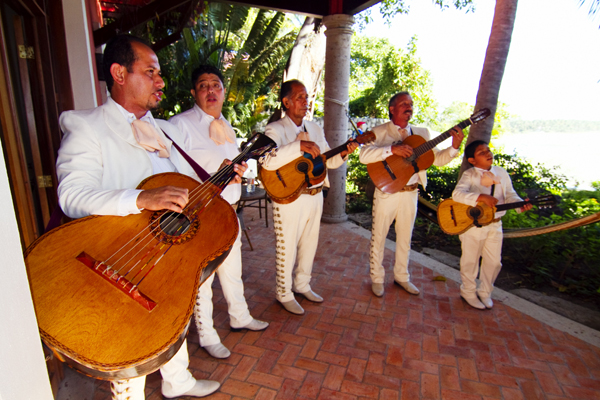 Mariachi band at the fiesta in Custodio. Photo by David Lansing.

The board of the HOA had elected a new presidente so, of course, there was a fiesta to celebrate. Everybody got cleaned up and late in the afternoon we all wandered down the cobblestone road, Mechas and Malin escorting Signe over the somewhat treacherous path and Sally arm-in-arm with her son Chris. Outside a large flamingo-colored villa was a mariachi band, all dressed in their white charro outfits. The band included a little boy, maybe eight or nine years old, playing the vihuela, a high-pitched, five-string guitar. The boy’s voice was pitched just about as high as the vihuela and what he lacked in pitch he more than made up for in enthusiasm and bravado. It was as if his father, who stood beside him playing the classical guitar, had told him, “Hijo, if you can’t sing well at least sing loud.”

Actually, none of these guys could really hold a tune. Listening to them, I sometimes wondered if they weren’t actually singing two or three different songs at the same time. As if the leader of the band had said, “Well, boys, I’m going to sing Cielito Lindo but you guys sing whatever you like.” They did, however, all know how to play their instruments with verve and authenticity, from the two trumpet players to the guy on my favorite mariachi instrument, the profound guitarrón, that large, round-bottomed acoustic bass that makes mariachi music sound like, well, mariachi music. Here’s a sample of the band playing just as we arrived at the fiesta.