A lynching in Galway 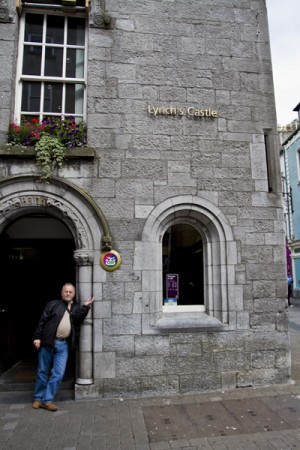 Mr. Lynch in front of Lynch's Castle in Galway. Photos by David Lansing.

The only real reason we’ve come through Galway is that Mr. Lynch has a hankering to see Lynch’s Castle, a once grand 16th century town house that is now a bank. I can’t complain. From here we’re headed east to Loughrea so I can take a gypsy caravan out into the countryside for a couple of days, and I suppose that if Mr. Lynch can be good-humored enough to indulge me I can certainly have a look at a wee castle that he claims is part of his family history.

The story: For over two centuries—roughly 1450 to 1690—Galway was controlled by 14 merchant families, or “tribes,” one of which was the feared Lynch clan who lived in the castle we’re looking for from sometime in the 1500s until 1690 when William of Orange, a Protestant, led a hardened army of 36,000 French Huguenots, Dutch, English, and Scots against the Catholic King of England, James II in what was called the Battle of the Boyne. Well, James got his fanny handed to him and fled to France; all the Catholic lands were confiscated (including Lynch’s Castle) and the Protestants held power in Ireland for the next 300 years. I guess you could say this is where The Troubles all began.

Well, I’ll tell you, after coming all this way, there isn’t much to see of Lynch’s Castle. So I snap a couple of shots of Mr. Lynch standing in front of the bank and then we walk around the corner to a side of St. Nicholas’ Church where Mr. Lynch stops in front of a mossy stone façade with a window at the top. You ever wonder where the term “lynching” came from, says Mr. Lynch. Well I hadn’t but it doesn’t matter because Mr. Lynch is going to tell me the story whether I want to hear it or not. 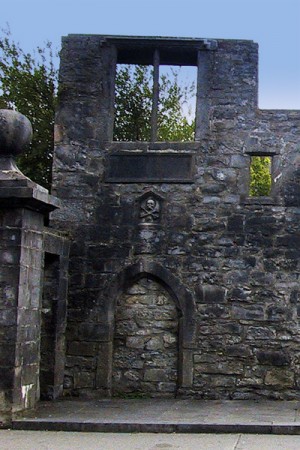 The Lynch family supplied Galway with over 80 majors between the 15th and 17th centuries, says Mr. Lynch. One of those mayors was a fellow named James Lynch. James Lynch had a son named Walter who was a bit of a hothead and the story goes that in 1493, Walter murdered a young Spaniard over something to do with a woman (of course).

Well, in addition to being the major of Galway, James Lynch was also the magistrate, and determined to seek justice for the murdered Spaniard, he convicted his own son and sentenced him to death. On the fateful morning on which Walter Lynch was to be hung, the Mayor and bailiffs tried to escort him to the gallows. But a large crowd, sympathetic to the young man, had formed to prevent the hanging. So the Mayor, still holding his bound son, took him into their house nearby and on reaching an upper window overlooking the street, he fastened a rope around his son’s neck and launched him from the window, hanging him in full view of the “Lynch mob” assembled below.

Mr. Lynch pointed to the very same window on the stone façade above us. And so you have my family to thank for “lynching,” says he.

Just to be on the safe side, I stayed a few paces behind him on the walk back to the car.