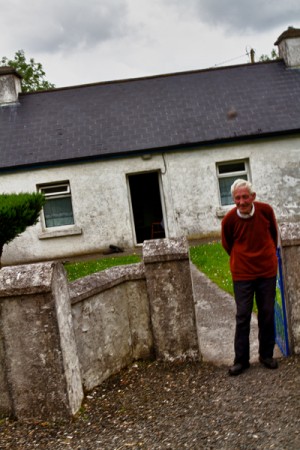 I’ve read the directions Mr. O’Connor gave us to the gypsy caravan place a dozen times to Mr. Lynch and I’ve got a road atlas spread out on my lap, but we’re still lost. We’re looking for McCormack’s pub, I say. It should be on our left side.

We got from Galway to Loughrea all right but somewhere along the line after passing the lake (most unattractive) we missed a fork in the road or maybe several forks and now we’re just bumbling about out in the countryside looking for a sign or a village or anything that will give us an idea of whether we’re heading towards Portumna (not good) or Ballinakill (that would be the ticket).

Stop the car! I yell at Mr. Lynch. He almost drives us into a ditch and then clutches at his heart. You near gave me a heart attack, he says. Why are we stopping? There’s a local up ahead. Let’s ask him if we’re on the right road.

The gentleman in question is hunched over and stands at the gate of an old stone house as if he were waiting for a visitor to arrive. Mr. Lynch slowly pulls the car up in front of him. He eyes us with suspicion. A mad looking sheep dog is running back and forth behind the stone fence barking his head off.

Excuse me, says Mr. Lynch, but can you tell us if we’re headed for Ballinakill?

The sheep dog has escaped the yard and is dancing on his hind legs in front of the open window on Mr. Lynch’s side of the car, trying to take a nip at his chin.

Thanks anyway, says Mr. Lynch rolling up the car window. As he guns the car, he throws small pebbles back at the hunched old man who is giving us the finger as his dog dances madly around him on his hind legs.

An hour later we pass McCormack’s pub, although it is on our right side, not our left. We turn around and just past the pub take a fork in the road to the right until we come to the end of the road. Take another right, past a church and there, across the way, is a farm with three bright red gypsy caravans sitting out front on the lawn. We’re hours late, but we’ve made it to Cartron House Farm.