Bodeguita del Medio and the history of the mojito

Sooner or later everyone in Havana ends up at Bodeguita del Medio, no doubt the most popular bar in Habana Vieja. I have never been in there when the bar, which isn’t much bigger than normal-sized living room, wasn’t jammed (and unbelievably, there’s usually a group playing in here as well).

It’s such a body-pack that usually people worm their way in the door, order a mojito, and suck it down in just a few minutes. Which is probably just fine with the management since it means the turnover (and drink orders) is high. 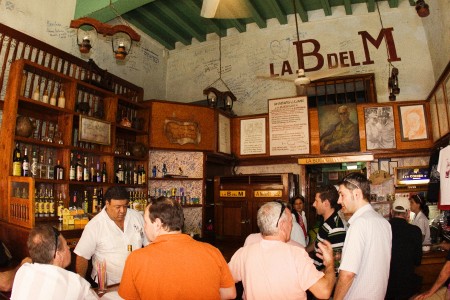 Some people think that daiquiris were invented at the Floridita and mojitos at Bodeguita. The first may be true, but the mojito is one of the oldest cocktails around and predates Bodeguita, which transitioned from a food shop to a bar shortly after WWII, by at least a hundred and fifty years.

Lots of celebrities—Nat King Cole, Brigitte Bardot, Errol Flynn—have dropped in on Bodeguita for a mojito but the guy that made it famous, of course, was Ernest Hemingway. There’s an old stained sign, in large script handwriting, above the bar that says, “My mojito in La Bodeguita. My daiquiri in El Floridita. Ernest Hemingway”.

Of course, he never wrote any such thing. So sue them.

Now, I have to say that the mojitos at Bodeguita are not that great. They use lots of mint, which is good, but way too much watered-down lime juice which is diluted even more by being topped by mineral water. Plus, like almost all mojitos in Havana, they use way too much sugar. I prefer to taste the rum in my mojito, not sticky-sweet cane syrup. 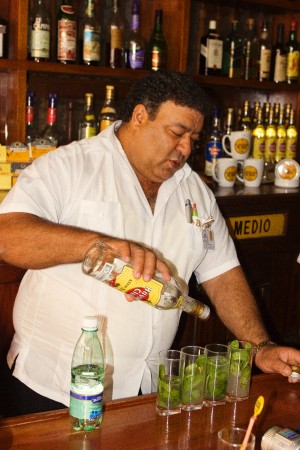 Surprisingly, the food is pretty good here as long as you stick with the Cuban classics like the roast pork served with fried plantains and what they call “sleepy black beans,” which just means they’ve cooked for so long they’re practically pureed.

Be sure and bring a black marker so you can write something on the graffiti-filled walls. I wrote something near the stairs and will send four Bodeguita mojito stir-sticks to anyone who can find it and tell me what it says.