The search for Casa Mederos

Well, what can I say about Mr. Geiser except that he’s not very practical. To wit: He comes to Cuba to go fishing and has, at most, a day and a half to see Havana, so what does he do? Instead of walking around the old city and maybe stopping for a drink at Bodeguita del Medio or listening to music at Bar Monserrate, he hires a taxi to take him way out past Miramar to a little neighborhood called Náutico where, for the next several hours, he can drive up and down every little street off 5th Avenue, where all the foreign embassies are, looking for a house he doesn’t even know still exists. 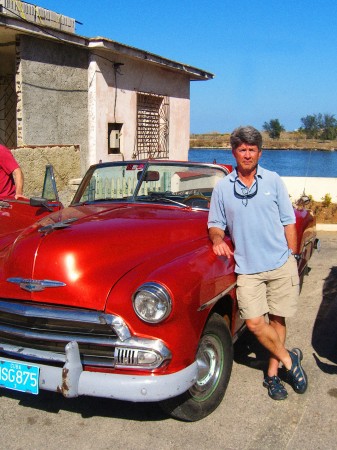 Here’s the backstory: Geiser has a friend in Los Angeles named Diego Mederos who lived in Havana when he was a little boy. I don’t know what Diego’s father did but since they lived in probably the nicest neighborhood in Havana, I’m guessing he didn’t hang out with the same crowd as Fidel and Che. So soon after the revolution, Diego’s dad buried the rifle he’d used against the revolution underneath the doghouse in the backyard, grabbed his family, and fled to the United States.

A few year’s later, Diego’s dad and his uncle went back to Cuba as part of the Bay of Pigs invasion which, as you’ll recall, didn’t work out so well. Particularly for the Mederos family. Diego’s uncle was shot and his father was imprisoned. Eventually he was released and sent back to the U.S. But Fidel and his buddies didn’t forget about the Mederos. According to Diego, every few years his dad would get a letter from the Cuban government saying, basically, We know where you live and we haven’t forgotten that you’re a dirty, stinking, no-good traitor to the Cuban people.

A while ago, Diego’s dad died, having never gone back to the land of his birth. But his mom is still alive, although she recently turned 86, so odds are she’s not going to get back to the Tropicana to kick up her heels one more time either. Which is where Geiser comes in. When he told Diego he was going to Havana, his friend wondered if it might be possible for Geiser to find their old home in Havana. “My mother doesn’t even have a single photo of the house we lived in,” he said.

So on his only full day in Havana, Geiser decides to skip walking around with the rest of us and, instead, to go on a wild goose chase looking for a house where his buddy lived 50 years ago. A house that may or may not still exist.

He has very little information. Diego tells him it was in a neighborhood known as Havana Biltmore and his elderly mother still remembers the address: 186 106th street. So Geiser and the taxi driver head up 5th Avenue, past the Miramar neighborhood as the street numbers begin to climb…94th…96th…98th…110th…wait! What happened here? They must have missed it. So he has the taxi driver turn around and go more slowly. But the result is the same. One minute you are crossing 98th street and a block over it’s 110th.

Loathe to give up, Geiser has the taxi driver take him up and down every street around the neighborhood, thinking perhaps it’s just oddly situated, as many of the streets are. But there is no 106th street and after spending all afternoon searching, he gives up.

But you know that’s not going to be the end of it, right? Because a week later, Geiser speaks to someone who has lived in Havana their entire life and gives him some new information. The Biltmore neighborhood is now called Náutico and it is further west of Miramar, near Marina Hemingway. “Look for a restaurant on the left hand side of the road called the Biltmore Café,” he tells him. “It should be just past that.”

So on the final half day that Geiser has in Havana, once again he abandons his friends and goes on a quixotic search for his friend’s family house. He packs up, checks out of the hotel, and hires another taxi to take him to Náutico. But just like the first time, there is no 106th street. Again, he spends hours going up and down every little street in the neighborhood with no success. Dejected, he finally gives up and tells the taxi driver to take him to José Marti International so he can catch his flight home.

They’re about halfway there when this Cuban light bulb goes on over Geiser’s head. He’s thinking about Diego and his 86-year-old mom when it suddenly hits him: Maybe the old woman transposed the numbers! Maybe their house wasn’t 186 106th street; maybe it was 106 186th street.

The taxi driver slams on the brakes and turns the car around. They zip past the neighborhood they’d been searching for the last two hours and into a neighborhood called Flores. Along the way they pass the Biltmore Café. Geiser is thinking, It’s got to be around here. Past 182nd…184th…to…186th street. And there, a block from the ocean, is a lot surrounded by green cyclone fencing and freshly-painted stucco walls and on one column are tiles for the house number: 106. 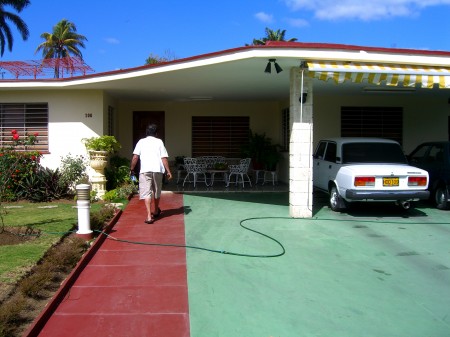 Two minutes after Geiser hops out of the taxi, there’s a guy at the fence asking him what he wants. Geiser explains the story to him, in broken Spanish, and asks if he can take a photo.

Absolutely not, the man tells him. No photos. Go away. The man strides like a dictator back to his house. And as he does so, Geiser sticks his camera in an opening of the fence and snaps a photo. And then another. Of the house. Which, back in Los Angeles, he shows to his friend Diego Mederos.

“Is this your house?” Geiser asks him.

But Diego doesn’t answer him. He can’t. He’s so emotional seeing the photo that all he can do is nod quietly while trying not to cry. Eventually he’s able to say one thing: “Wait until my mother sees this.”

And I don’t think I have to tell you what this 86-year-old woman, who was once a young girl living in Havana and then had to flee, leaving everything behind, did when she saw the photo of Casa Mederos. Suffice it to say that Geiser believes his afternoons in Havana spent searching for his friend’s old family house was time well spent.