Bodhisattva, won’t you take me by the hand 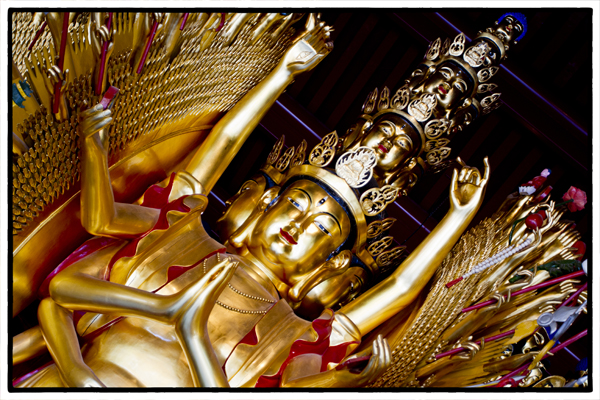 The bodhisattva Avalokitesvara trying to teach me patience and compassion. God knows I need it. Photo by David Lansing.

There was another Buddha at Richmond’s International Buddhist Temple that I liked a lot better than the Laughing Buddha: Avalokitesvara.

Actually, Avalokitesvara isn’t a Buddha; he’s a bodhisattva. According to Wikipedia, a bodhisattva is “anyone who, motivated by great compassion, has generated bodhicitta, which is a spontaneous wish to attain Buddahood for the benefit of all sentient beings.”

What they’re trying to say is that a bodhisattva is someone who shows you the way to spiritual enlightenment but doesn’t go through the door themselves. Remember that old Steely Dan song: “Bodhisattva would you take me by the hand/Can you show me/The shine of your Japan/The sparkle of your China/Can you show me/Bodhisattva.”

Probably the most popular bodhisattva is Avalokitesvara, which means something like “the Lord who looks down on the world.” That’s because he’s keeping an eye on everyone. Actually, lots of eyes. He’s said to have 10,000 hands and 10,000 eyes in each hand, the better to see you with, my dear.

A Buddhist website says that in Tibet, he is said to be a reincarnation of the Dalai Lama. That’s interesting. “Avalokitesvara teaches us patience as well as compassion. He has withheld his own Buddahood until he has helped every sentient being on earth achieve nirvana.”

I like that idea. Which is maybe why I spent a lot of time on Saturday hanging out Avalokitesvara.

Evidently August 6 is “Avalokitesvara Bodhisattva Enlightenment Day” here at the temple. Lots of chanting going on. Maybe I should come back. If you wonder what chanting to Avalokitesvara might sound like, check out this YouTube video.