Coffee and a sprinkled donut at Timmy’s 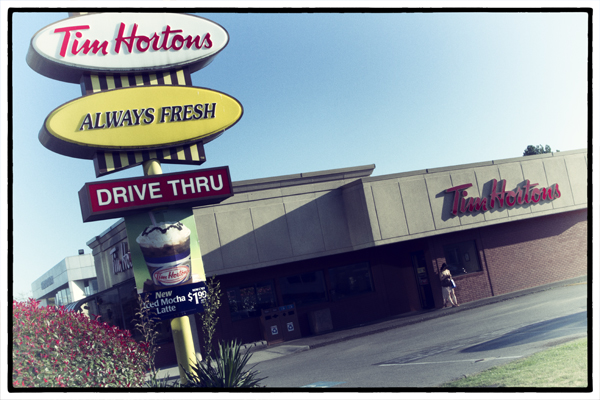 Tim Hortons are everywhere in Canada. Photo by David Lansing.

It’s time for me to get out of Canada. I know this for sure because this morning, without really thinking about it, I went into a Tim Hortons for coffee and a donut with sprinkles.

What was I thinking?

Canadians say they love Tim Hortons coffee. That’s crazy. It’s like Dunkin’ Donuts coffee, which is fine if you think Juan Valdez grows only the richest, most flavorful coffee beans on the planet. If you still swear by your Mr. Coffee machine (and miss Joe DiMaggio), then maybe you’d like the coffee at Tim Hortons. If the only tea you’ll drink is Lipton’s, then maybe you’ll like Tim Hortons. Frankly, I think the Canadians go there just for the donut balls. Which aren’t very good, either, but at least they give you an excuse to order the coffee (you’ve got to wash those gut balls down with something).

You know who always loved Tim Hortons coffee? Hitler. I’m not kidding you. Look at this video of Der Führer throwing a hissy fit when he realizes it’s going to take forever to get his coffee and a donut with sprinkles.

Meanwhile, I’m heading for the airport. Where maybe I’ll make one final stop at Timmy’s. 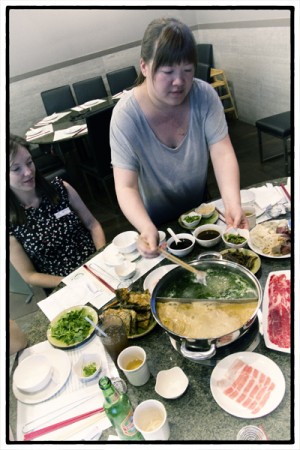 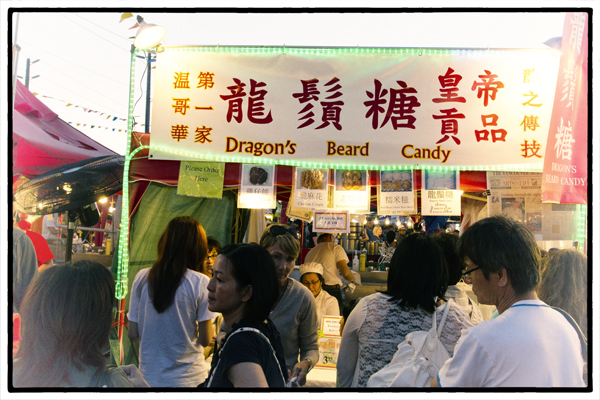 So Mijune and I were gobbling up some serious crispy skin pork from Parker Place Meat & BBQ when Mijune spotted a place where they sell dragon’s beard candy. She bought a little four-pack of the stuff and I tried it. It was okay. Not great, but okay.

And then a few days later, we were at T&T, the Asian supermarket, and, again, we got some dragon’s beard candy. I liked it better this time.

So last weekend when we were pigging out at the Richmond Night Market, our last stop was the Kam’s Dragon’s Beard Candy stall.

Dragon’s beard candy is sort of like Chinese cotton candy—with a peanut cluster in the middle. What makes it interesting isn’t so much what it tastes like but how it’s made (and I think you could say the same about cotton candy). 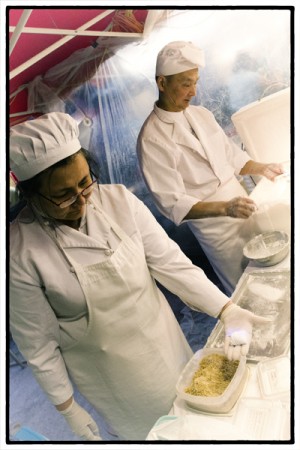 She’s holding a piece of dragon’s beard candy while the guy on the right is doing his magic making the sugar strands. Photo by David Lansing.

I stood watching the guy making the candy at the Night Market and Mijune tried to explain to me what was going on. Basically, the guy takes spun sugar that has been boiled and then repeatedly pulls and folds it over until he’s created hundreds of thread-like sugar strands, and then he covers the sugar strands in rice flour, to prevent sticking, while pulling the strands apart.

Once the strands are made, he hands them to a woman who cuts them into small pieces and wraps the spun sugar around a mixture of peanuts, sesame seeds, and coconut. That’s it.

Originally, Dragon’s beard candy was only made for the emperors of China (and called dragon’s beard because dragons are a Chinese imperial symbol). According to Mijune there are only a few hundred people in the world today who even know how to make it. So I suppose that also adds to its allure. Also, it doesn’t really hold up very well after its made. You kind of need to eat it fresh. Which also makes it seem more exotic.

Anyway, we waited in line for 15 or 20 minutes, watching the guy pull the sugar strands apart and it was like watching a magic trick. I couldn’t quite figure out how, exactly, he did it.

I asked the woman who was taking the sugar strands and stuffing them with the nut/coconut mixture how long it took the guy to learn how to make the candy. She said four years.

So it takes him four years to learn how to make the candy, and then we have to stand in line for 15 minutes to buy a package, and the whole thing is gone in like 30 seconds. The short, happy life of dragon’s beard candy. 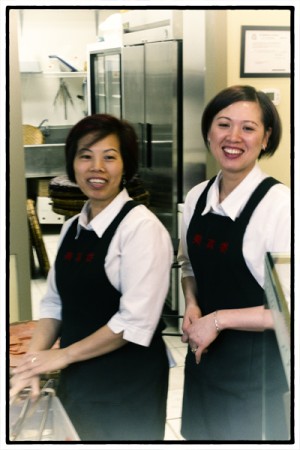 The jerky girls at Mei Jan Hong in the Aberdeen Centre. Photo by David Lansing.

When I was a kid growing up in Oregon my dad would make venison jerky. It was as tough as it was salty. We’d take it with us when we went fishing since a slab would last you all day. It was like gnawing on shoe leather.

In Malaysia it’s called bak kwa and you can get it everywhere. In Malaysia and Singapore bak kwa is usually made from beef, pork, or mutton. At Mei Jan Hong, they make beef and pork as well as chicken or salmon. No mutton.

Usually there are two types of Singapore-style jerky: One is made from very thin slices of a whole cut of pork or beef; the other is made from scraps that are pressed and made into bricks. Jerky made from whole cuts of meat are generally leaner than the bricks of meat, but the bricks are easier to slice and work with.

Mei Jan Hong uses bricks and slices the meat into squares so it kind of looks like a very thin Wendy’s hamburger (actually, what they most remind me of is these frozen meat patties we used to fry up when we were in high school; they tasted great but god-only-knows what they were made of. Pink slime?).

At Mei Jan Hong, they air-dry the squares of meat in stainless-steel drying boxes (you can see the guy in the back doing this), then finish them off on the grill so you get this slightly-smoky taste (which was what lured me here in the first place). You pick your meat, then order it either sweet or spicy. I went for one of each of the pork and beef. The winner, hands down, was the sweet pork jerky which, to me, tasted like jerky char siu. Sweet, soft, fragrant and nothing at all like the jerky I remember from my youth. Thank god. 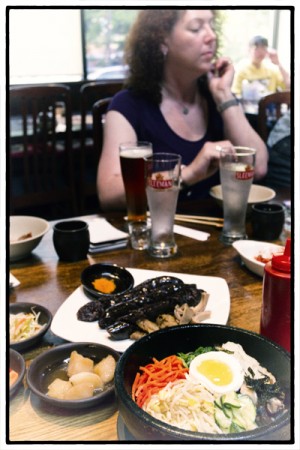 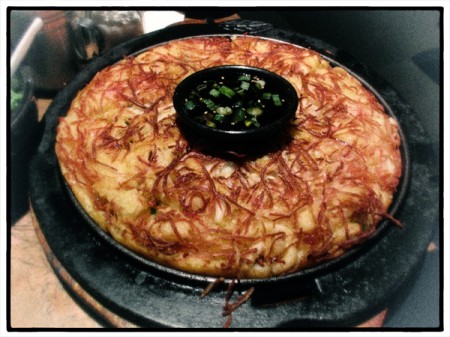