You are currently browsing the archive for the Bagan category. 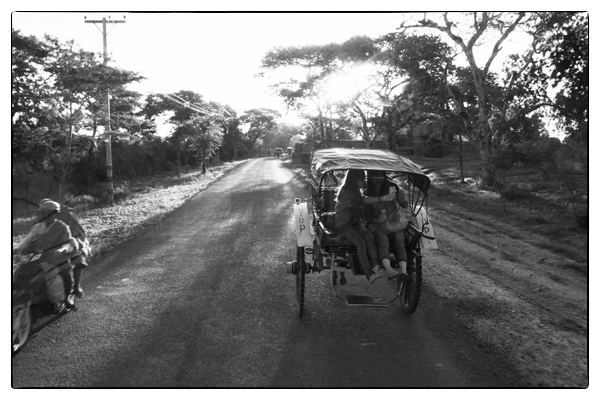 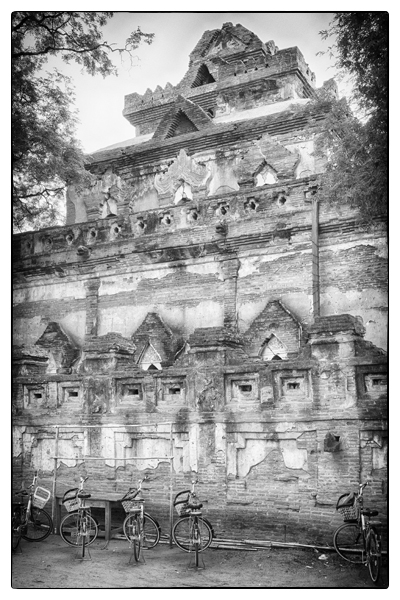 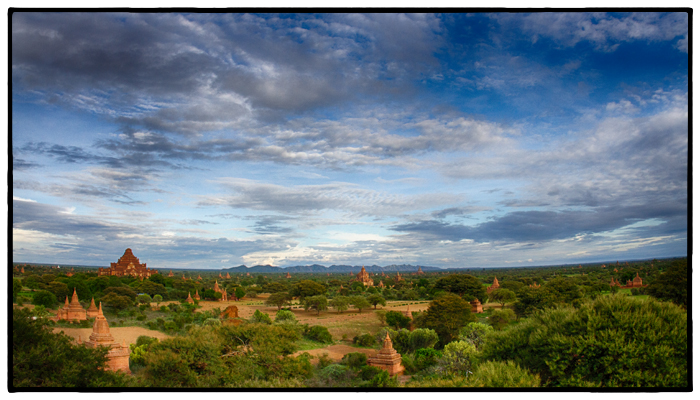 The view at sunset after climbing the Shwesandaw Pagoda in Bagan. Photo by David Lansing.

Dozens of vendors at the base of the Shwesandaw Pagoda selling postcards, young coconuts, bottled water, and, most bizarrely, pirated copies of George Orwell’s Burmese Days, covered in plastic sleeves.

The dirt road leading to the temple is lined with tour buses and the air is thick with the red dust thrown up by all the vehicles hurrying to get here before sunset. The dust lightly covers my arms and hair and gets in my nose and mouth.

I climb. The first couple of levels are not too bad. You just have to keep reminding yourself to take your time. Even if there are people right behind you. By the third level I am slightly out of breath. The steps become narrower, the hold more tenuous. I decide to depart from the stairs I am on and make a quarter turn along the parapet, looking for a new, less busy way up. By the fourth level, each step has become a challenge. Raise my left leg high, shift and steady my planted foot, lift while lunging forward with my body, trying not to rely too much on the thin, rusty handrail that seems only half-set in to the concrete steps. Pull too hard on this, I think, and one would immediately fall backwards and fly off the temple to the red dirt below.

Panting, sweating, feeling a little vertigo, I finally reach the final level. Get away from the edge, lean against the warm stone wall, catch my breath. And look out.

Magnificent. Red earth. Dry green fields. Palm and tamarind trees framed by the hazy silver-grey of distant mountains. And all around, hundreds and hundreds of brick-colored temples. A sight so other-worldly it seems certain that it must come from a dream. Truly one of the most stunning sights I’ve ever seen.

A sunset climb at Shwesandaw Pagoda 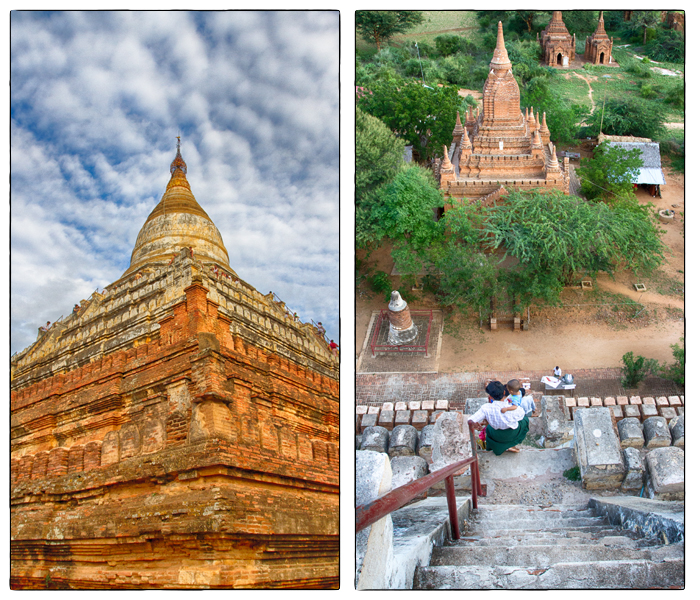 The Shwesandaw Pagoda, left, in Bagan. If you look very carefully you’ll see several tiny, tiny little people climbing up the temple to give you an idea of the scale. Right, a Burmese father comes down the steep steps carrying his son in his arms. Photos by David Lansing.

So a hot-air balloon ride over Bagan at sunrise was out but Sai had another idea: watching the sunset from the top of the 328-foot-tall Shwesandaw Pagoda.

“But you must climb Shwesandaw and this is not so easy,” Sai told me.

How hard could it be?

So about an hour before sunset, we drove out to Shwesandaw, which is sometimes called the Ganesh Temple because there were once statues of the elphant-headed Hindu god at the corners of each of its five successively diminishing terraces.

Were the Ganesh images removed by Buddhists or had they been destroyed in the big earthquake in 1975 that also toppled the central spire (which now stands in the dust beside the pagoda, right where it fell)?

Sai didn’t know. Or maybe he knew but wasn’t telling. When a religious site is almost a thousand years old, a lot of shit goes on, not all of it good. The Burmese, like people everywhere, don’t like to repeat the bad stories. Better to just say, “I don’t know.”

Once we got to the site, I saw what Sai meant about the climb. I was thinking that it would be like climbing a hundred stairs or so to the top of a hill. But it wasn’t like that. Instead what I found were very, very narrow steps, each over two feet high so you practically had to stand sideways just to get a leg up, going practically straight up. This was more like climbing a ladder, with rungs two feet apart, on the outside of a 30-story building.

As I was standing at the bottom contemplating things, a young backpacker yelled back at his mate to not forget to bring their torches—flashlights. Something I hadn’t thought of. Because of course, if you were going to climb to the top of a 328-foot thousand-year-old temple to watch the sun set over Bagan, you were inevitably going to have to descend the same temple in the dark.

All this had just about convinced me to watch the sunset from the ground when I noticed a young Burmese father, wearing a longyi (not exactly the best climbing attire), begin the climb while carrying his two- or three-year-old son in his arms. Crikey, if a man wearing a long skirt can climb these steps with a child in his arms, I thought, certainly I can get my sorry ass up there as well. And so I began to climb. 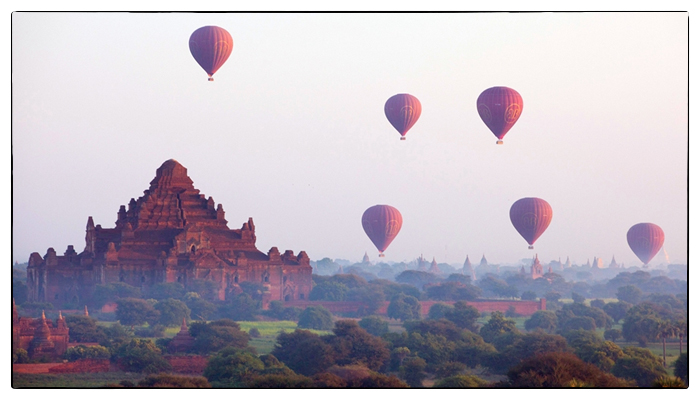 I don’t know why, but there are just some experiences that although they sound fabulous, something in my gut tells me they’re just not right. Like riding an elephant in Thailand. I just couldn’t do that. Although they told us that the money they got from the elephant rides went to save the animals, it seemed, somehow, like the opposite of conservancy. And when I heard that there was a company in Bagan that offered a hot air balloon over the temples, I had mixed emotions. On the one hand, it would certainly give you a shot at some awesome photography—not to mention getting a unique aerial view of the some 2,000 temples across the Bagan Plain.

On the other hand, a champagne breakfast and balloon ride over one of the rarer, most sacred archaeological sites in the world? Really?

But I was just ambivalent enough about it to check it out. The major company here offering hot air balloon rides is called Balloons Over Bagan. It’s owned by an Australian, Brett Melzer, and a young woman, Khin Omar Win, who was born in Yangon but raised in the UK. Yes these two are in it to make money (and why shouldn’t they be?) but they also employ about a hundred Bagan locals and take an active role in several community aid projects focusing on health, education, and environmental preservation.

So, good people. And certainly hot air ballooning isn’t doing anything to damage the Bagan Archaeological Zone like, say, zip lining or dune buggy tours. The basic experience costs about $320, which isn’t cheap but what the hell. It would certainly be a one-of-a-kind experience. But, alas for me, it’s also very popular and the ballooning, which only runs from October 1 to March 31, usually sells out way in advance. There is a wait-list I was told but I’m not going to be here long enough for it to do me any good. But when I come back to Bagan—or if you’re going—I would definitely consider doing this.

Murdered monks at the Ananda Temple 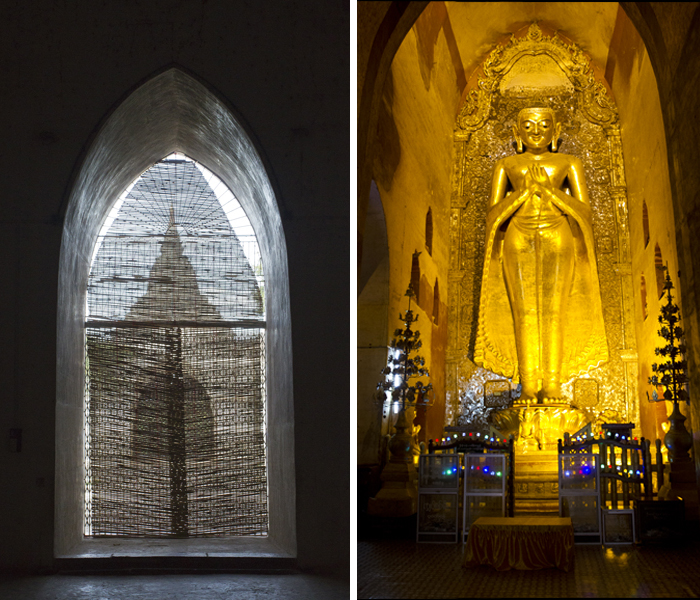 Photos of the Ananada Temple in Bagan, Burma by David Lansing.

Sai plays me like a fiddle. He knows all he has to do is tell me a good story about some place and I’ll want to go. So today he tells me the story of the Ananda Temple in Bagan.

“A thousand years ago eight traveling Buddhist monks approached the king in Bagan to beg for alms. They told him about this amazing temple in the Himalayas where they had meditated and were so persuasive in describing its beauty that the king immediately asked the monks to design a similar temple. Which they gladly did. The temple was so amazing and so unique that the king immediately had all eight monks killed. So they wouldn’t build a similar structure anywhere else.”

Okay, so how could I possibly resist that story? So we had to go to Ananda. Just like Sai wanted. 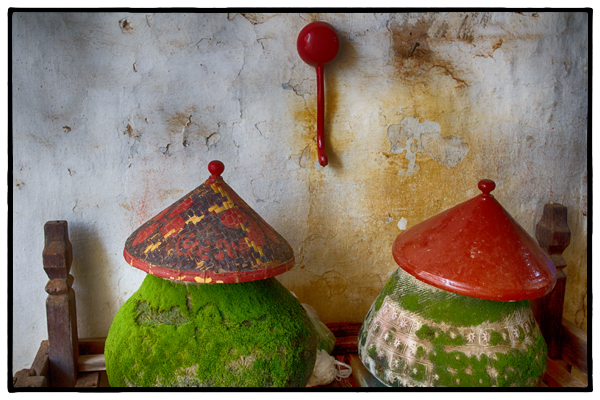 Water pots for the monks at the Ananda Temple in Bagan, Burma. Photo by David Lansing.