You are currently browsing the archive for the Ballymaloe category.

Jill and the pot still 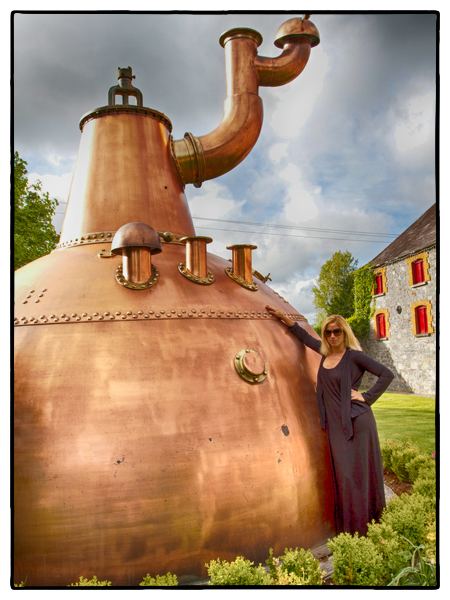 Jill and the pot still at Jameson Heritage Center in MIdleton, Ireland. Photo by David Lansing.

We were driving to the old Jameson distillery in Midleton when Jill Robinson, a writer from Northern California, leaned over and asked me if, when we got to Jameson, I’d take some photos of her kissing the big pot still out front.

I told her I’d be happy to and then asked her why she wanted a photo of herself kissing a pot still.

There was a sign near the pot still asking people to keep off the grass. Jill thought about that for a moment and then said, “To hell with it.” She ran across the grass and through the flowers and put her arms around the shiny pot still. Or at least as much of it as she could. I took pictures of her kissing the still, hugging it, and seductively leaning up against it as if she were Marlene Dietrich standing in front of her bedroom door.

Her antics created quite a scene. At one point I looked over my shoulder and there were at least a dozen other Jameson visitors also taking her picture. It had become an impromptu paparazzi moment and everyone was snapping pictures as fast as they could. I’m sure they had no more idea why they were taking the pictures than I did. But it was fun. 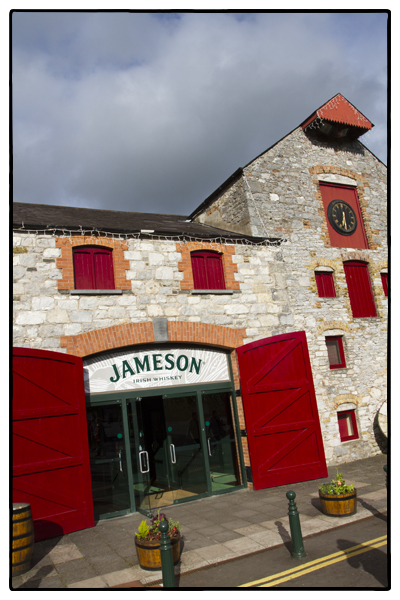 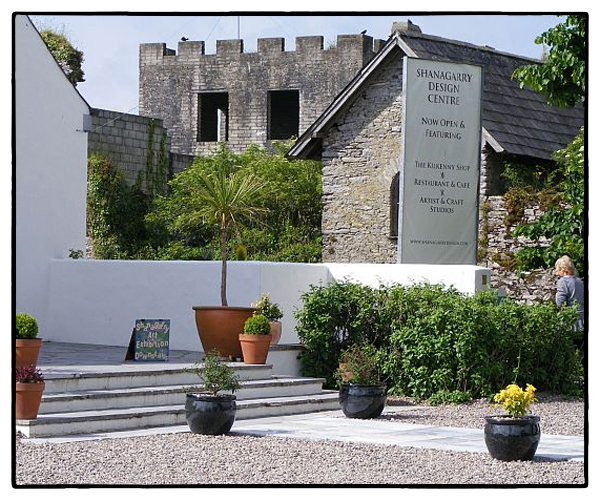 You can just make out the ruins of Penn Castle behind the Design Center in Shanagarry, County Cork.

Last week after writing about Shanagarry, the little fishing village that is home to the Ballymaloe cooking school, I got a note from one of my readers, Fred Harwood, who always seems to know a damn lot about the places I’m visiting. Fred wanted to know if Shanagarry wasn’t the village where William Penn owned a castle.

I don’t know how Fred knew this, but he was right; there is a Penn castle here. I’ll tell you how I found out. Yesterday Jan decided to go for a run along the country road in to Shanagarry, which is a couple of miles away. She got a bit lost (and also realized, after passing a roadside memorial to a killed pedestrian, that this wee road probably wasn’t the best for jogging) and went a lot further than she’d expected.

On her way back, there was an older gentleman doing some gardening in his front yard. He stood up and watched as Jan approached and then yelled out asking how far she’d run. Jan said she really didn’t know, but it was further than she’d expected. So the old gent comes over to the low stone wall in front of his house and asks her where she’s from. She tells him and then he points across the street to a ruin sitting behind the Design Center and says, “You’ve heard of William Penn, I suppose. Well, that was his castle.”

It’s not much to look at, the Penn Castle. More like a decrepit stone manor house. But it’s got an interesting story. Penn became a Quaker when he was about fifteen when he met a Quaker missionary, Thomas Loe, but he sort of kept it to himself because the Quakers were persecuted by both Catholics and Protestants in England and Ireland. In 1669, when Penn was 25, he traveled to Ireland to deal with his father’s estates, including the property in Shanagarry known as Penn Castle. While there he became an integral part of the Quaker community (which still exists in this area of Ireland) and decided that he needed to take the issue of Quaker persecution directly to the King. Which he did.

Somewhat surprisingly, King Charles granted an extraordinarily generous charter to Penn giving him possession of over 45,000 square miles of land west of New Jersey and north of Maryland in return for one-fifth of all the gold and silver mined in the province (which had virtually none). At first Penn called the area “New Wales,” and then “Sylvania” (Latin for “forest or words”), but King Charles changed the name to Pennsylvania in honor of Penn’s father, an English admiral and politician who sat in the House of Commons from 1660 to 1670.

In 1682 in England, William Penn drew up a Frame of Government for the Pennsylvania colony. Freedom of worship in the colony was an absolute, as was freedom from unjust imprisonment and free elections.

One last thing: Ireland is celebrating this big thing this year called The Gathering. It’s a way to get the hundreds of thousands of people all over the world who are at least part Irish to come home for all kinds of gatherings in the villages, towns and cities of Ireland. There are literary gatherings and jazz gatherings and walking gatherings and, perhaps the most famous gathering, a Riverdance Gathering in Dublin from July 15th to 21st when hundreds (thousands?) of former Riverdance cast members, as well as amateurs, will dance along the banks of the River Liffey. That should be spectacular.

Anyway, I mention this because there’s also going to be a William Penn Gathering in Shanagarry on August 25th to celebrate all things Penn. Fred, maybe you should think about going. 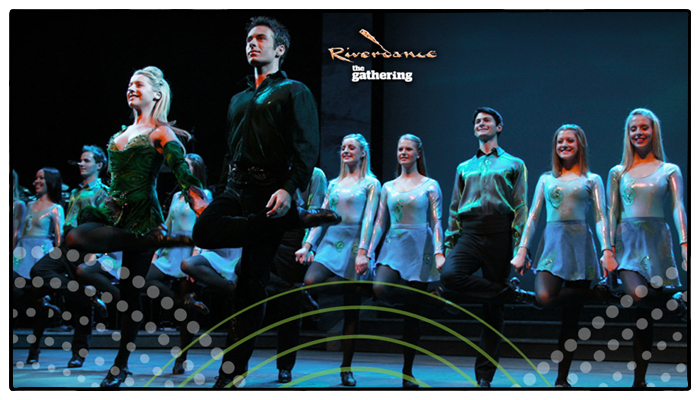 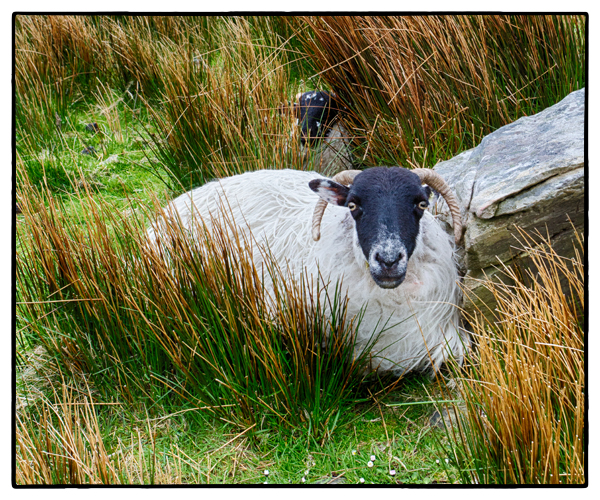 Seamus was coming out of the pub with his son when he stopped and put an arm around the youngster. He nodded towards the village in front of them and said, “You know, I built half the homes in this village but nobody calls me a homebuilder.”

Then with a wave of his arm, he said, “And I worked on half the roads in this village but nobody calls me a roadbuilder.”

Seamus sighed, put his two hands on his son’s shoulders and, looking him hard in the eye, said, “But you fuck one sheep….” 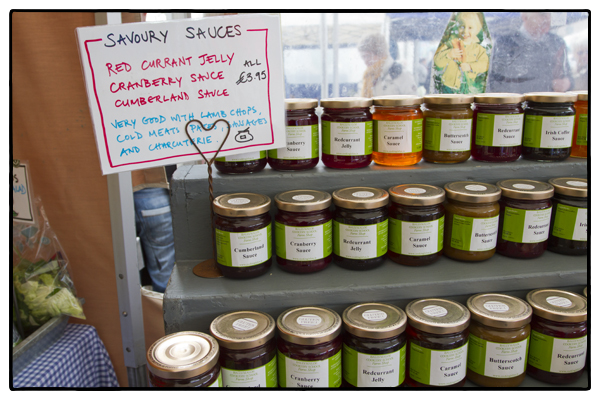 As the sign says, Very good with lamb chops, cold meats, pates, sausages, and charcuterie. All photos by David Lansing.

As if writing books and running a cooking school and being on TV weren’t enough, Darina Allen also started the whole farmers market scene in Ireland when she founded the first, in Midleton, in 1999. Believe it or not, before that, there were no farmers markets in Ireland.

She told me, as we were driving to the Midleton market, that it all started when the large supermarket chains started buying up all the small grocers in the country. “Once the big guys came in, everything had to be centralized and they would punish a grocer for carrying produce from local farms. People had no access to local produce anymore. So I decided to start the Midleton farmers market just as a way to let people have that connection again with local producers.” 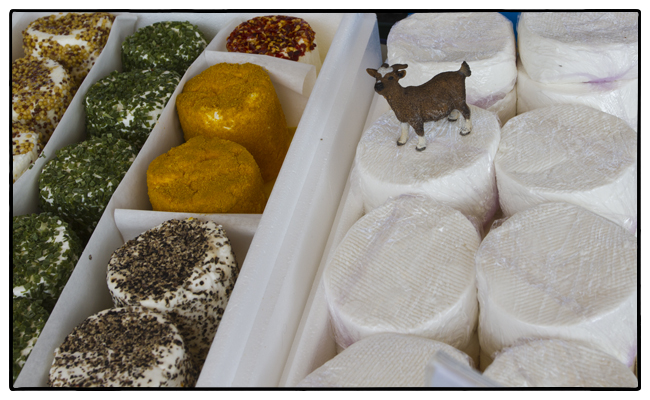 Now, according to a list published by the Irish Food Board (Bord Bía) there are over 150 farmers markets in Ireland, from the potato market in Carlow to the quay in Wexford County.

These aren’t big, sprawling affairs like you might find in the States, but modest enterprises where you can quickly walk around and get a feel for what’s available in five or ten minutes. Yet perhaps because the market ends up being the best-of-the-best, you’re tempted to buy one of everything, from the little jars of savoury sauces (red currant jelly, cranberry sauce, Cumberland sauce) to a slice of parsnip and maple syrup cake (which tasted like an extraordinary carrot cake). 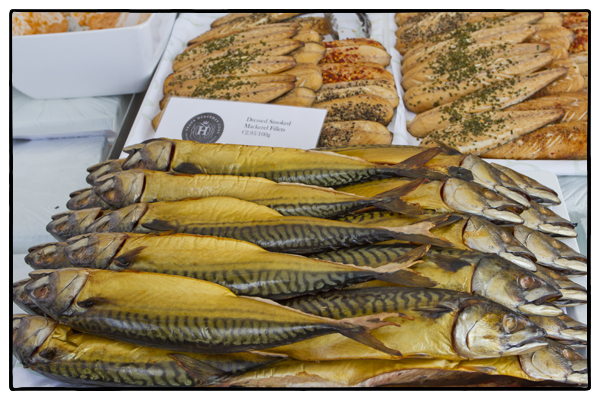 I was particularly attracted to the smoked mackerel, their rich, oily deliciousness a real flavor-bomb in your mouth. And the local herb-crusted goat cheese. Oh, and Darina’s own elderflower cordial which she says is great with champagne or in a gin and tonic. That sounded so good I bought three bottles of the stuff. Now I just wonder how I’m going to get it all home. 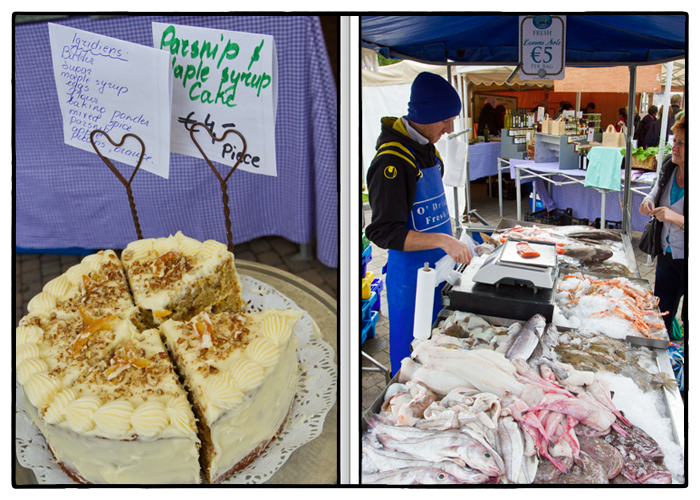 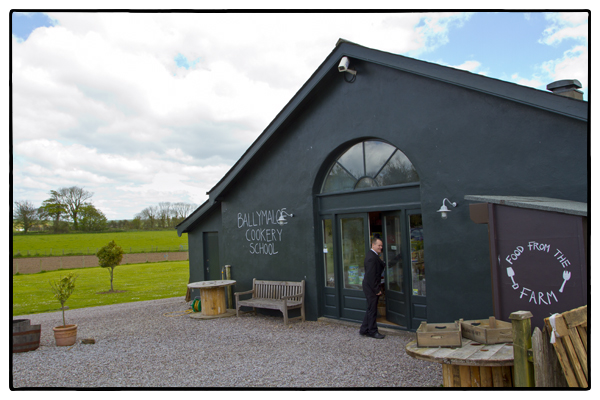 So I was trying to explain how Ballymaloe is a hotel. And a restaurant. And a cooking school. Ivan and Myrtle Allen started the whole thing back in 1948 (you can still catch Myrtle having a cup of tea by the fireplace in the parlor most mornings; Ivan passed away in 1998).

Anyway, if I start explaining who all of the Allens are (even I can’t keep them straight) and who does what around here, we’ll all end up confused. So I’ll just go right to Darina Allen who learned a bit about Irish farmhouse cooking from her mother-in-law, Myrtle, and then opened the Ballymaloe Cookery School with her husband Tim 30 years ago.

It’s in no way an exaggeration to say that Darina Allen is now Ireland’s best-known chef. In addition to running the Ballymaloe Cookery School, she’s also a newspaper columnist, cookbook author, and television show celebrity. Oh, and she started the whole Farmers Markets in Ireland thing.

When I jokingly suggest to her that she’s sort of the Martha Stewart of Ireland, she says, “Well, I suppose. She’s a nice enough woman. I’ve been on her show a few times.”

Here’s Darina on her cooking school: “We started the school because I was a chef and my husband, Tim, was a farmer and we wanted to run something from home. This connection between farming and cooking is vital. Unlike any other cookery school in the world, we are located in the middle of a 100-acre organic farm, of which ten acres are devoted to organic market gardens, orchards, and greenhouses. This means that our students can learn to cook using the finest and freshest of ingredients. It also means we have a great variety of ingredients—for instance, we grow over 40 different types of tomato alone!

“We believe that cooking and eating should be enriching, enjoyable, entertaining and, in a word, fun.”

Which perhaps explains why the web site for the Ballymaloe Cookery School is cookingisfun.ie.