Choosing the wurst at KaDeWe 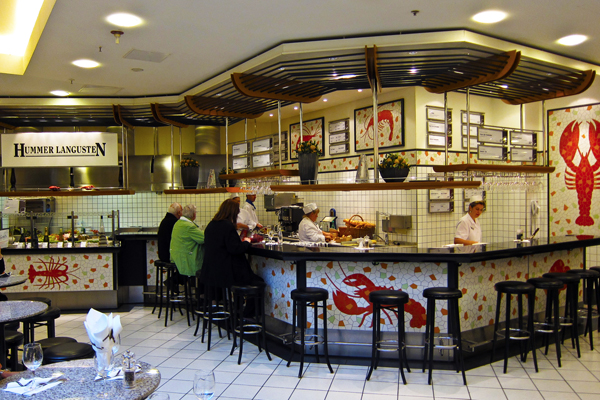 One of the many food kiosks at KaDeWe, this one specializing in lobster and champagne.

I am wandering around Berlin’s über department store, KaDeWe, looking for gummi bears for a friend. Don’t ask me why, but my friend insists that the Germans make the best damn gummi bears in the world. Even better than the Japanese. I don’t mind this mission. Actually, it’s a good excuse to head up to the food hall on the 6th floor where I plan to have lunch.

Let me just say this: I can be indecisive when it comes to food and the many food bars spread over the food hall, which, to my mind, is much better than the one at Harrod’s, offer an enormous choice. So while I’m half-heartedly searching for the gummi bears, I pick up a few bars of Valrhona chocolate and then spend the next half hour trying to decide what to eat. Some of the front runners: 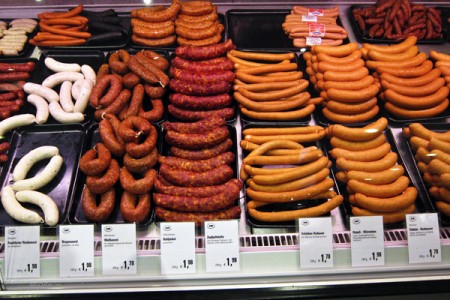 So many sausages, so little time.

–Round, chewy hard rolls (Brötchen) filled with tiny North Sea shrimp along with a Beck’s.

–Emerald Irish rock oysters on the half shell and a glass of Pouilly-Fume.

–Breaded fillet of Havelzander on braised cucumber with a pepperbutter sauce and aquavit.

–Scampi with risotto and Pouilly-Fuisse.

–Quiche Lorraine and a glass of Sancerre.

–Sausages (Wurst) and a Löwenbrau.

In the end, I settle on a plump sausage sandwich, although even here the choices are difficult: Do I want the currywurst, Rostbratwurst, eisenbock wurst, or the Münchner Weisswurst? And a light or dark beer?

So many choices. And I still haven’t found the gummi bears.